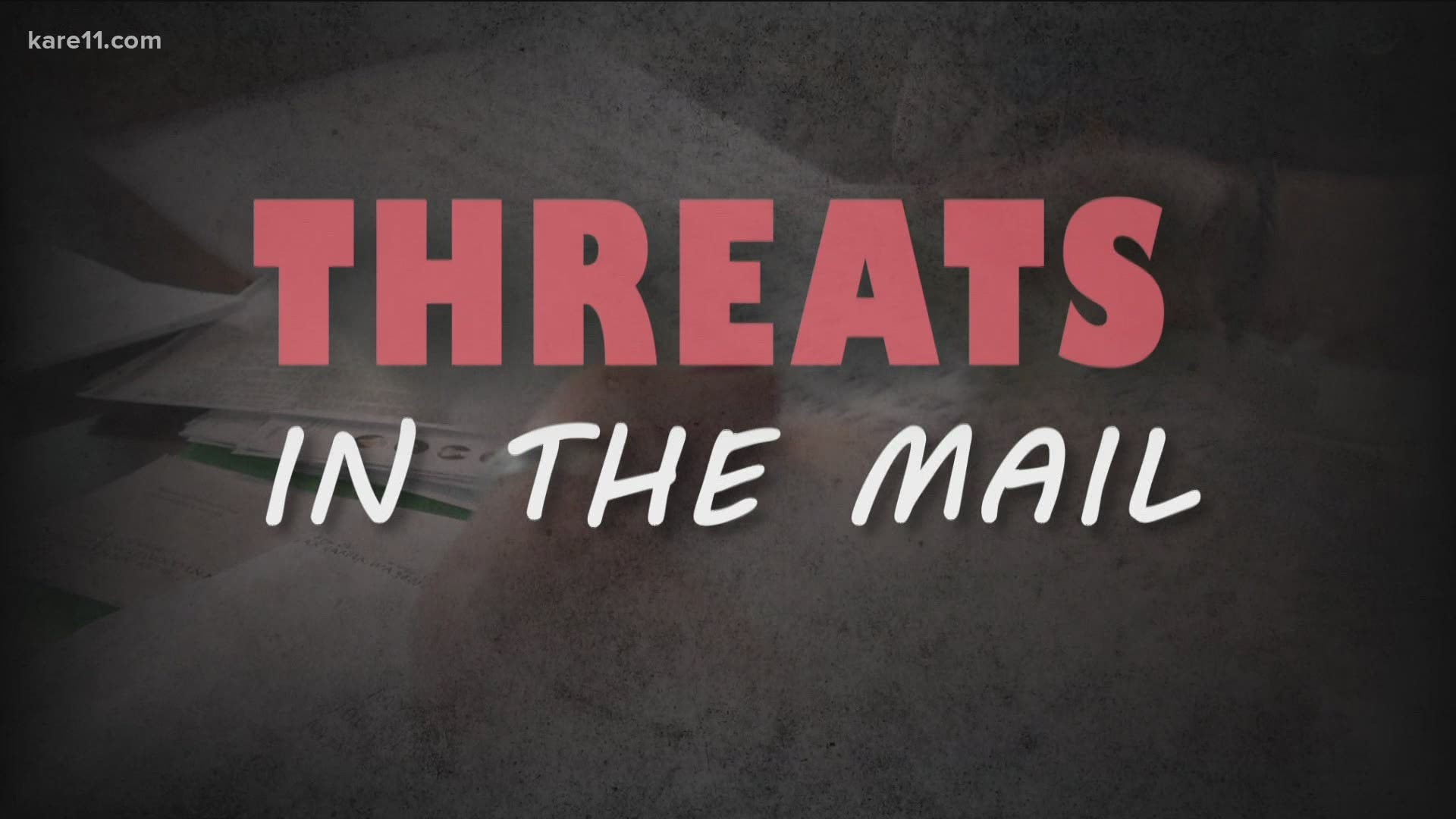 BELLINGHAM, Wash — Authorities in Whatcom County, Washington have agreed to a plea bargain in the stalking and harassment case against Matthew Dale, a former Twin Cities man believed to have sent threatening letters, emails and texts to people nationwide.

The threats are chilling. Dale wrote about impregnating young girls. Raising the babies for “plunder and extortion.” Then “sacrificing” the children.

The plea deal comes in the wake of a KARE 11 investigation which documented how Dale began sending threatening letters to his former Minnesota high school classmates years ago.

Over time, victims told KARE 11 the letters also went to their relatives across the country.

KARE 11 reported that Dale, 43, was arrested in Bellingham, Washington on May 15 for sending similar letters to a woman there.

As part of the plea agreement, Dale will spend two years on probation and has agreed to stop sending similar letters – at least for now.

The story began decades ago at Jackson Junior High and Champlin Park High School in the Twin Cities suburbs.

But 15 years after they graduated from high school, she says she got a strange message out of the blue from him on Facebook.

“It was sort of like: I knew you back in junior high and now you want to steal my money from me. And then there were these Biblical, weird comments – and things like that.”

She says she blocked him – and forgot about it. Until one day, about three years ago, when she went to her mailbox and found a long, hand-written letter.

Dawn soon discovered she was not alone. Other classmates on the list had been getting the threatening letters, too.

“Some of the people I went to high school with, their daughters are 8, 9, 10 years old. And he’s writing their names in the letters,” she said.

Over time, they were getting similar threats in post cards, texts, and social media messages – from Facebook to Snapchat.

“This is harassment. I mean it’s an ongoing, systemic thing that he’s doing to instill fear in hundreds of people,” Dawn Cooper said. “And it’s across the country.”

Credit: KARE 11
Kristen Jaakola bought a personal taser for her daughter after getting threats.

Barry and his wife are examples of how the number of mailings expanded year by year.

What started out as threatening letters to former classmates grew to include their family members. Matthew Dale had apparently done research to identify parents, grandparents, aunts, uncles, cousins – even in-laws.

Credit: KARE 11
When her family complained to police, Shirley Ertl says they said their hands were tied.

At first, Minnesota authorities said there wasn’t much they could do to stop the messages.

In May, however, a real estate agent in Bellingham, Washington – where Matthew Dale now lives – finally convinced authorities there to file formal charges against him.

Ten years after she helped Matthew Dale find a home in Bellingham, she started getting similar letters. He also threatened to get her pregnant and sacrifice the child.

“I would watch cameras around my home, sometimes for hours in the middle of the night. And just lay there and watch my cameras,” she told KARE 11’s Lauren Leamanczyk.

“Banging, ravishing … until she gets pregnant,” the hand-written letter said.

“So, this second round was really about raping me. Very clearly,” Sue said.

The criminal charges were based on the specific threats against her. But police records from the case – obtained by KARE 11 through a public records request – show just how widespread the threats have been.

Investigators detailed a private website for victims with more than 100 members nationwide. An agent working for a special Federal Task Force in Minneapolis documented 56 formal complaints made to various police departments nationwide.

The reported threats include a restraining order request from Matthew Dale’s stepmother. In addition to sending threatening mail, she wrote he once “lost his temper” and threatened her and his own father “with a knife.”

The original charges in Washington state were gross misdemeanors, punishable by up to a year in jail.

After his arrest in May, Dale was held in jail – unable to make bond – for nearly three months before agreeing to plead guilty to one count of stalking.

He was sentenced to two years on probation. During that time, he has been ordered “not to send any letters or make any contacts of the types described in the police reports.”

In court documents agreeing to the plea bargain, Dale wrote that he now understands that his letters frightened people. “I reasonably should have known they were afraid even though I did not intend to harm them,” he wrote.

For people here in Minnesota, who were tormented for years, there’s finally some relief.

They say they haven’t gotten additional mailings since his arrest. And, now, with the plea agreement in place, they hope the silence continues.

Credit: KARE 11
Thanks to the plea agreement, Dawn Cooper says "We have peace for now."

“To know that for two years it’s going to be a very quiet two years. I don’t know what it will look like after that time, but at least we have some peace for now,” Dawn Copper said. “And the victims and people who are getting letters and feeling afraid, and not knowing what to do, have a little bit of closure on that.”

If Dale ever returns to Minnesota, he could still face criminal charges here.

After his arrest in Washington, he was charged with felony aggravated stalking in Wright County. The criminal complaint accuses him of sending threatening messages to the family of a former classmate in 2019 and 2020 despite a Harassment Restraining Order the family obtained in 2018. The alleged threats involved the family’s underage daughter who was just 12 years old at the time.

According to court filings, Minnesota authorities are not seeking to extradite Matthew Dale to face trial here. But If he returns to Minnesota, there’s a felony arrest warrant waiting.

If convicted, Matthew Dale could face up to 10 years in jail.

Before his arrest in Bellingham, KARE 11 attempted to contact Matthew Dale by letter, text, email and phone.  He did not respond.