Other states – including Wisconsin – are more aggressive than Minnesota in enforcing gun surrender orders. 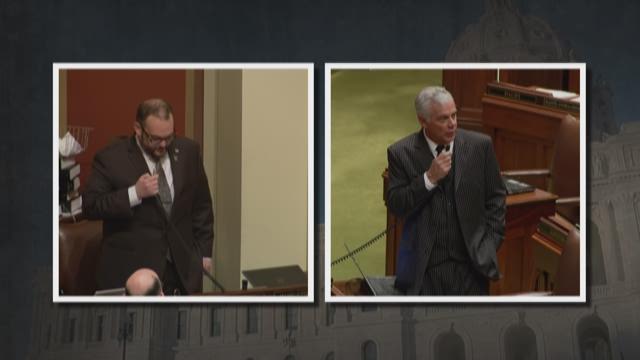 GOLDEN VALLEY, Minn. - Minnesota’s Domestic Violence Firearm Act was approved in 2014, supported by some of the state’s most outspoken gun rights advocates.

"We put as much protection for gun owners as we possibly could, and also protect a woman or a man from getting shot and killed," said then-Rep. Tony Cornish (R-Vernon Center) during the debate.

The law mandates that after an Order for Protection civil hearing, if a judge determines that domestic abuse has occurred, the alleged abuser has three days to transfer firearms to someone else or to police for as long as the order is in effect. In addition, the law requires an affidavit to be filed with the court detailing where the guns went.

But a KARE 11 investigation found the gun surrender law designed to save lives is rarely enforced.

"There’s no secret at all that he owns a gun," said Desiree Nelson, about the man who abused her. "They tell him to surrender it, and then no one even checks."

"He absolutely owned firearms!" exclaimed another victim who asked not to be identified. "He went hunting with them all the time."

Her court records detail threats to "blow my head off" and "put a bullet in every one of your animals' heads."

"These are cases where we think the court should be taking action," said Liz Richards, of the Minnesota Coalition for Battered Women.

In King County, Washington, they are taking action.

Prosecutors and police formed a task force last year specifically targeting the guns of accused domestic abusers. They work with victims and scan social media sites to identify firearms that abusers may not admit to owning. Then they use search warrants and other tactics to seize the weapons.

As a result, authorities say they have quadrupled the number of guns seized from abusers.

"A year ago, none of these guns would have been recovered," said an officer, pointing to an array of firearms.

Unlike most courts in Minnesota, Wisconsin automatically schedules a compliance hearing seven days after the gun surrender order is issued. The goal is to make certain the order has been followed.

“Without requiring people to come in and prove that they’re following it, you can’t just assume that they’re doing it,” said David Keck.

He is a former Court Commissioner in Wisconsin who helped craft the state’s protocol.

Now he regularly travels to Minnesota to help design a similar pilot program being considered in Hennepin County.

"It needs to be done before there’s a tragedy," he said.

There’s no shortage of tragedy. The Minnesota Coalition for Battered Women’s annual Femicide report found that "at least 20 percent" of the domestic violence gun-related homicides over the last five years were committed by someone already prohibited from possessing a firearm.

He is working to develop the pilot project to better enforce firearm transfer orders.

"We can do more in making sure that is a meaningful order and not just a piece of paper," he said.

A piece of paper that – when enforced – could prevent domestic abuse victims like Desiree Nelson from becoming the next tragic statistic.

Sources tell KARE 11 Gov. Mark Dayton plans to propose a series of gun-related reforms – including the domestic abuse firearms issue – as early as next week.

If you are the victim of domestic violence and are looking for help, here's the number for the Minnesota Day One Crisis Line: 1-866-223-1111.