A Lakeville mother says a medicine transformed her 5-year-old son’s life. But Minnesota Medical Assistance refuses to cover it – leaving him in agonizing pain. 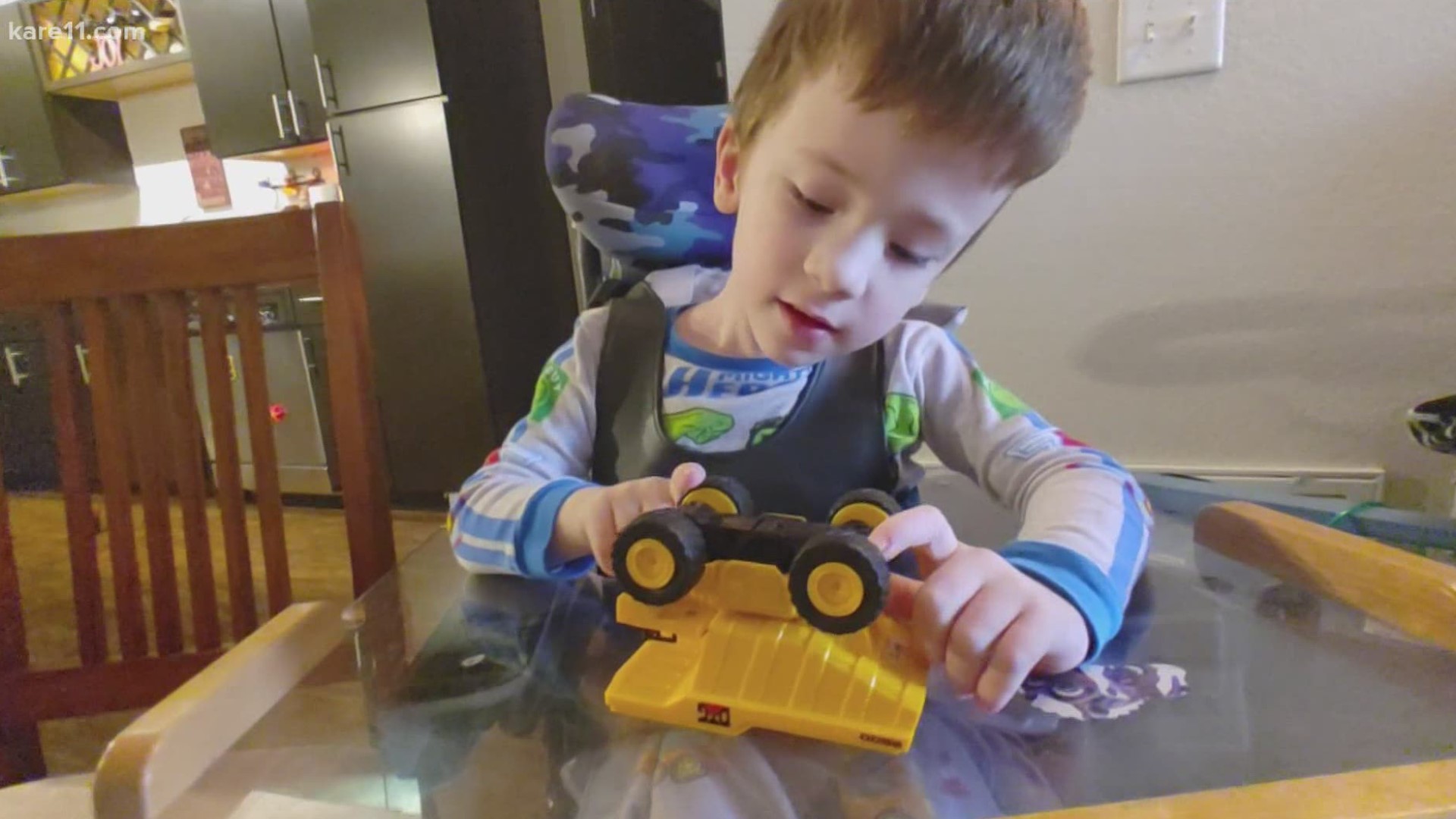 “His screaming episodes last anywhere from an hour to three-plus hours, multiple times a day and night,” says his mother Amanda.

He’s only five, but Braxtyn has had more medical complications than most people have in a lifetime.

His mother says he’s already endured 10 brain surgeries. He has chronic lung disease and cerebral palsy. And a recent leg surgery left him reliant on a cocktail of powerful narcotics to numb the pain.

Credit: KARE 11
Braxtyn Olson has had a series of serious medical complications.

He screams – often unable to sleep because of severe nerve pain.

“In order to keep him comfortable lately since the surgery, we’ve had to basically almost sedate him,” Amanda told KARE 11. “It’s heartbreaking.”

The pain was so severe Braxtyn had to be hospitalized.

That’s when doctors at Children’s Minnesota tried something new – a medicine called pregabalin, also known by the brand name Lyrica. The drug is often used to treat pain caused by nerve damage due to diabetes and other conditions.

“It is like a miracle drug for him,” his mother said.

Credit: KARE 11
Within days, the drug pregabalin was 'life-changing' for Braxtyn.

In just days, Amanda says Braxtyn’s pain and the crying episodes were nearly gone. She shared videos with KARE 11 showing him happy and playing – able to focus on school and family.

Despite what Braxtyn’s doctor describes as “life-changing” results, the state of Minnesota through its Medical Assistance program is refusing to pay for Lyrica for the boy.

“He deserves to be able to be as typical of a five-year-old as he can be,” she said. “And this medication gives him that opportunity.”

After the state’s initial refusal, Dr. Scott Schwantes, the Director of the Pain and Palliative Program at Children’s Minnesota, wrote a passionate appeal saying pregabalin is “absolutely necessary” for Braxtyn – calling it “imperative to his overall health and wellbeing.”

Credit: KARE 11
This letter from Braxtyn's doctor called the medicine "imperative to his overall health."

Even after the doctor’s appeal, the state denied the request again.

In a statement, state officials told KARE 11, “Our hearts go out to Braxtyn.” But they defended the decision saying, “The FDA has not approved the use of Pregabalin for pain management in children.”

The Olson’s purchased one month of medicine, paying out of pocket. But at more than $600, it’s too expensive to continue.

“It’s not really something we can sustain,” Amanda said.

Credit: KARE 11
Amanda Olson is appealing the state's refusal to pay for her son's medicine.

She has decided to appeal the state’s decision again – hoping a third appeal works before the drug runs out.

Meanwhile, she’s set up a GoFundMe page to help cover the cost.

“All I can hope for is that we can get insurance to cover it. And if they won’t, then as his mother I will take it to the ends of the earth to get it covered,” Amanda said.

Here is the full statement the Minnesota Department of Human Services provided to KARE 11 about Braxtyn’s case:

"Our hearts go out to Braxtyn and all those who spend their childhoods suffering from complicated medical conditions. DHS takes seriously our responsibility to provide Minnesotans with safe, high-quality, affordable health care. For safety and efficacy reasons DHS requires that a drug be used to treat a condition that is either approved by the U.S. Food and Drug Administration or a condition for which the use is described in references mandated by federal law. The FDA has not approved the use of Pregabalin (Lyrica) for pain management in children and it is not included as an indication of use in children in federal references."

If you have a suggestion for an investigation, or want to blow the whistle on government fraud, waste, or corruption, email us at: investigations@kare11.com