Other contractors pitch in after a KARE 11 investigation revealed how a banned contractor had taken a Twin Cities woman's money. 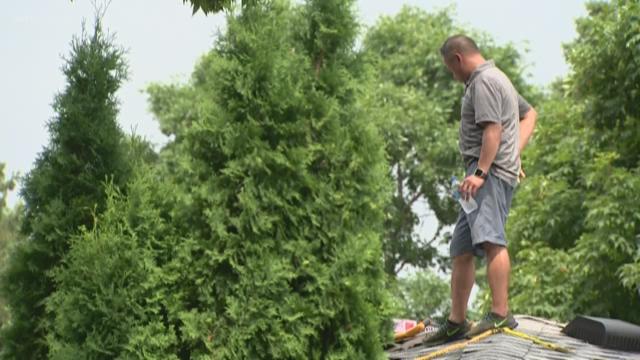 BLAINE, Minn. – Construction projects can be full of surprises. But surprises are even more frustrating when the project consists of fixing someone else's recent work.

“You should never feel worried about falling through a roof,” said an Amana Construction worker as he peeled away rotten wood on KatieMae Carroll’s roof.

She hired Moses Wazwaz to do the repairs.

But KARE 11’s investigation found Wazwaz was working without a license. Records show he’d been ordered by the state to stop contracting.

KatieMae also didn't know that Wazwaz was a convicted criminal, sentenced to state prison for felony burglary and assault, convicted of failing to pay $70,000 of child support over 15 years, and guilty of writing bad checks.

KatieMae says Wazwaz took her money but left her fence lying in a pile, the siding job unfinished, and the shingles, we're now learning, nailed onto a rotten roof.

“I feel sick actually seeing that the last crew would actually just put shingles over something like this,” said Khue Le, the owner of Amana Construction.

KatieMae heard from 15 contractors wanting to help. But for Le the job has special meaning.

“Moses and I went to high school together,” Le said.

Le said he and Moses Wazwaz were friends and occasionally worked together until he felt cheated, too.

“He wouldn't follow through with all his promises, kind of like what happened here. So, we had to cut ties, business and personal,” Le said. “I just felt that and knew that if I could do something, I might as well. And I should.”

He reached out to others who agreed to help.

Even with the donations and discounts, it’s a huge investment by Khue Le. An investment KatieMae doesn't take lightly.

“Just really grateful,” she said. “I can't believe, they've gone far beyond what I ever imagined would happen here.”

She repaid them in cake and homemade lunch.

But really, all they needed was to see the look on her face when she saw the finished work.

“See, that, your reaction to this just makes it worth it,” Le responded.

It’s important for Le to know that KatieMae has seen what good contractors with good hearts can do.

“We're both babbling and crying,” KatieMae said, asking Le for a hug. “I really appreciate it. I hope you know that.”

KatieMae took Moses Wazwaz to court and won a $15,000 judgment against him. However, getting him to pay may be another story. As KARE 11 reported earlier, Wazwaz has tens of thousands of dollars of unpaid judgments already.

KatieMae also has a GoFundMe page to help Khue out with the costs a little bit – since so much more work had to be done than anticipated. Here is a link to that page.