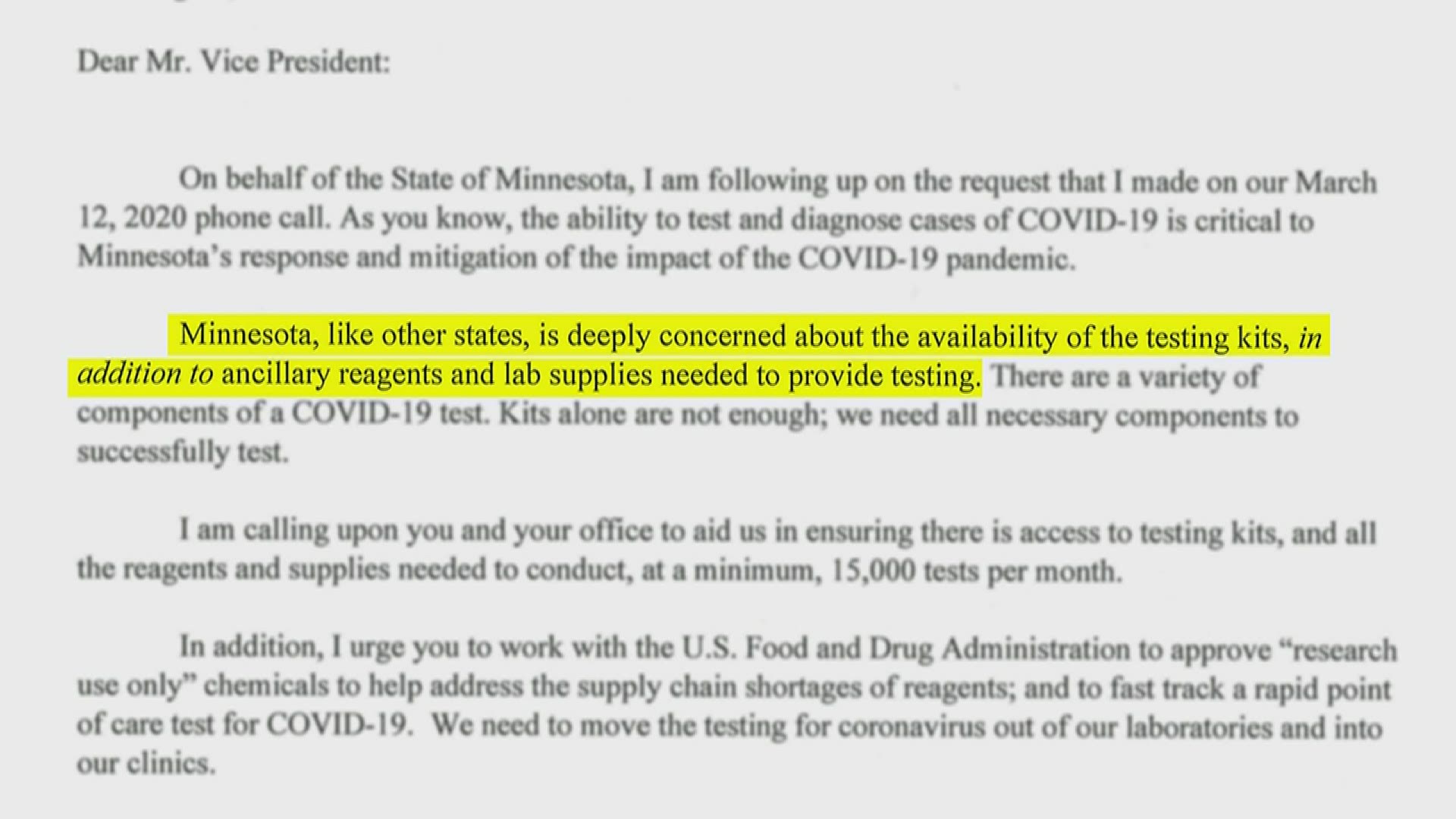 ST PAUL, Minn. — In the early days of the pandemic Minnesota’s hospitals came dangerously close to running out of critical supplies as Governor Tim Walz was pleading for federal help, documents obtained by KARE 11 reveal.

The letters and formal supply requests were released as part of a Data Practices Act request for all correspondence between the governor’s office and the federal government.

On March 13, Walz wrote to Vice President Pence urging him to work with the FDA to get critical testing equipment. “Minnesota, like other states, is deeply concerned about the availability of the testing kits, in addition to ancillary reagents and lab supplies needed to provide testing,” Walz wrote.

Explaining the need, he added “We have been forced to ration the number of tests performed at our public health lab.”

That same day Walz struck a more guardedly optimistic tone as he held a news conference explaining new social distancing guidelines and the peacetime state of emergency he had declared.

“Minnesota Department of Health and our private sector health care is prepared to deal with this,” he said.

The request notes that M Health Fairview Hospital System was just three days from running out of supplies.

Credit: KARE 11
This emergency request to the national stockpile said a Minnesota hospital would run out of key supplies within days.

So, did Minnesota get those important supplies?

Seven days later, on March 20, Minnesota Health Commissioner Jan Malcolm said, "We received a partial order today, but we're unclear where the rest of it is. So, the other two orders that we put in ourselves have not yet been responded to.”

It was not the last time Minnesota would be close to - or out of - key equipment needed identify the virus and save lives.

Testing supplies remained in short supply. Although President Trump had insisted on March 6 that “Anybody that needs a test, gets a test,” Walz disagreed. On March 18 Walz told reporters: “I watched the news conference that says we have testing capacity. I'm telling you we don't have testing capacity.”

Credit: KARE 11
Gov. Walz disputed President Trump's claim that "Anybody who wants a test gets a test."

That day he wrote directly to Dr. Deborah Birx who is a leading member of the federal government’s coronavirus task force. The letter says, “We are critically low on reagents necessary” to process tests. Walz tells Birx other key supplies are also scarce. “Our supply orders are backordered, and we are only receiving partial orders sporadically.”

Because of limited supplies, widespread testing was not available in Minnesota. At the time, testing was limited to patients in hospitals and long-term care facilities, plus front line health care workers.

Meanwhile, by the end of March, ER doctors and nurses were telling KARE 11 that protective masks were already being rationed.

Nurses who had been trained that masks were only for one-time use said they had been instructed to use the same mask for multiple patients throughout the day, even storing masks in paper bags between shifts to be used again.

Before the coronavirus crisis, nurses say they would have been disciplined for a health safety violation if they ever re-used a mask.

By mid-April an emergency request for protective gloves from the Minnesota Department of Health (MDH) indicated, “In 3 days we burned through 165,000 non-latex gloves and have 0 on hand.”

The situation was just as dire when it came to surgical masks. In another urgent request the state wrote: “We currently have 0 masks.”

Credit: KARE 11
in this emergency request, the Minnesota Department of Health said it had run out of surgical masks.

The state told the federal government it was unable to provide masks for long term care facilities – even though the number of COVID-19 infections and deaths in those facilities were about to skyrocket.

On Monday, state health officials reported that 80% of Minnesota’s coronavirus deaths – 345 out of 428 – involved residents of nursing homes and assisted living facilities.

The Governor’s office did not agree to an interview about the documents. In recent news conferences Walz has said he believes his stay-at-home orders gave the state the time it needed to acquire additional supplies. He told reporters he feels comfortable with where the state is in terms of its PPE needs today.

In the past two weeks, Minnesota has committed to ramping up testing by using resources in our own state and is now conducting more than 3,000 tests per day with an eventual goal of 20,000 tests per day.

If you have something you’d like us to investigate, send us an email at: investigations@kare11.com