An inmate’s dying wish – and records reviewed by KARE 11 – expose what experts say was negligent medical care at a jail already under FBI investigation. 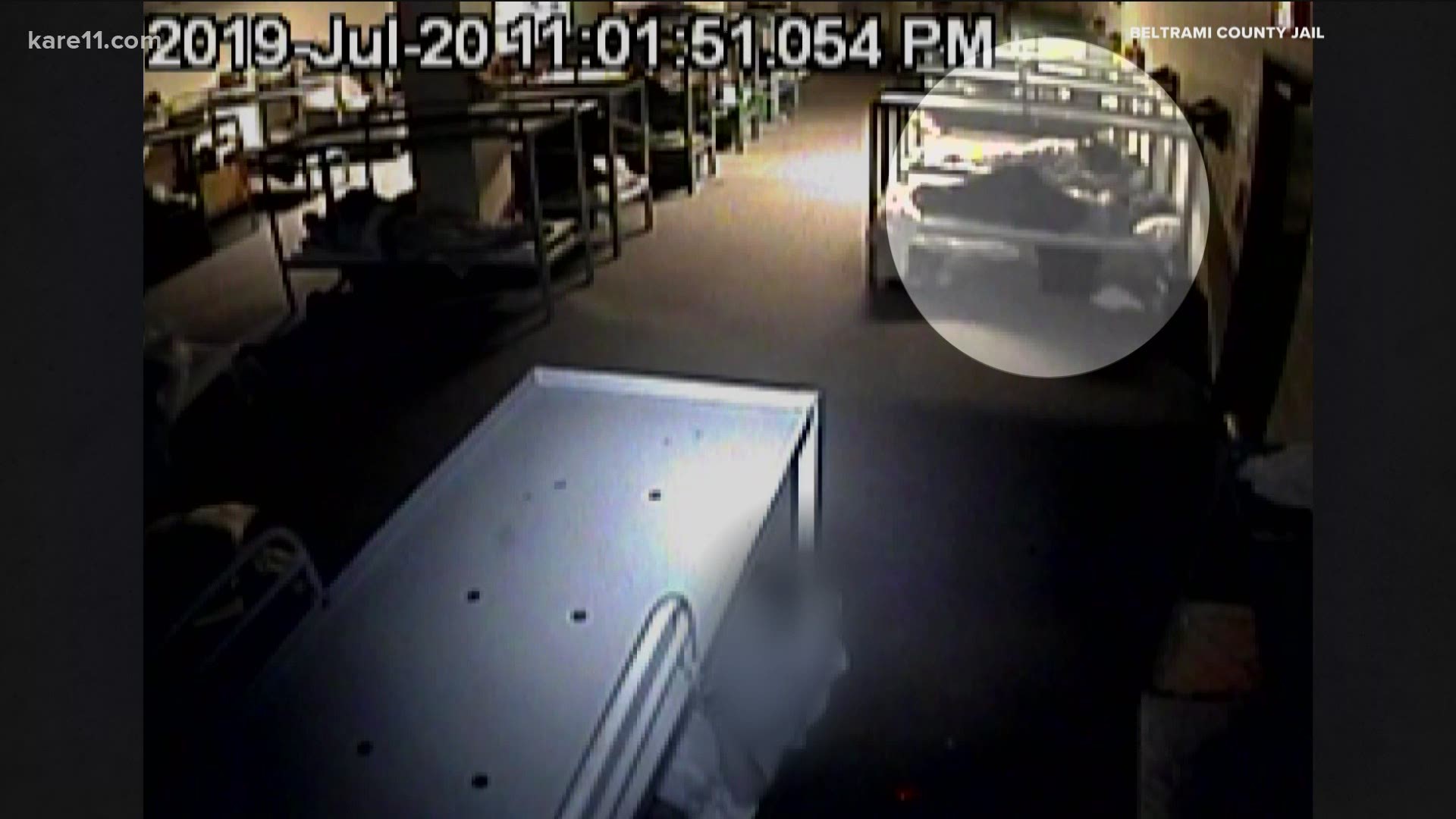 An autopsy conducted the next day found the 63-year-old died from natural causes, after being transferred from an overcrowded Beltrami County jail to the one at the next-door county of Clearwater.

But when Lundmark’s brother retrieved Bruce’s belongings from the jail, he discovered an alarming hand-written note.

“If I die sue the (expletive) out of Beltrami jail,” Bruce had scrawled on a piece of paper.

The mystery deepened when other Beltrami inmates began reaching out to Lundmark’s family. They said Bruce was clearly sick and was suffering intense pain – but never received medical help.

Records show that without reviewing his medical files, the Minnesota Department of Corrections (DOC) investigated and found no violations.

They document how Bruce Lundmark had described disturbing symptoms – and had even asked to see a doctor or nurse.

Experts who reviewed the case for KARE 11 say he was denied care that might have saved his life.

“It was negligent,” said Dr. Laura Lehmann, a specialist in emergency medicine.

“I wouldn’t treat my worst enemy this way,” said Melissa Becker, a forensic nurse examiner who also reviewed the records for KARE 11.

KARE 11’s investigation also found that the same private for-profit medical provider responsible for Bruce Lundmark’s care is under investigation for allegedly failing to provide adequate care for another inmate who died in the same Beltrami County jail.

Lundmark was a Vietnam era naval veteran. After his service he worked in construction, carpentry and trades. He played guitar and loved to paint. His artwork was often hanging in Bemidji area bars.

His family says he also had a lifelong struggle with depression, which he medicated with alcohol and drugs. That led to several DWI and drug possession charges, including the one that landed him in the Beltrami County jail on June 25 last year.

Bruce Lundmark’s dying note – and the calls from his fellow inmates – spurred his family to get his medical records and surveillance video from the jails where he was housed.

Those records, provided to KARE 11, show that Lundmark was incontinent with severe diarrhea and intense pain for at least three days days before his death.

Two days before he died, records show Lundmark asked to see a doctor or nurse. In a written request, he described abdominal pain and said he feared he might have had a stroke because of numbness in his left arm, leg and fingers.

Credit: KARE 11
Bruce Lundmark left this note asking his family to sue if he died.

The next day a fellow inmate told guards Lundmark was in so much pain they “needed to do something about it,” according to a report by a jail staffer.

Despite his symptoms, he wasn’t seen by a doctor – or even a nurse.

Instead, records show he was seen by a medical technician who was only qualified to hand out medications and take vital signs.

When she took his blood pressure the day before he died, she found it was sky high – 210/188 – according to her notes. The American Heart Association calls that level a “hypertensive crisis” where a doctor should immediately be consulted.

Before that could happen, he was shipped to the Clearwater jail.

When he arrived, records show he could barely walk. He collapsed and died hours later.

Two medical experts who reviewed the records for KARE 11 said Lundmark’s death likely could have been prevented had he been taken to an emergency room and seen by a doctor.

Dr. Laura Lehmann, who is board certified in internal medicine and emergency medicine, called Lundmark’s care negligent and his death preventable after reviewing his records.

“He had requested medical attention for complaints that in my opinion warranted immediate medical evaluation in an emergency department,” she said.

His symptoms – especially his report of numbness – should have been enough to send Lundmark to an emergency room, said Dr. Lehmann.

“Left sided numbness is an emergency complaint – that’s a stroke until proven otherwise,” she said. “You call an ambulance and you go straight to the emergency department.”

His care, said Melissa Becker, the forensic nurse examiner, “was profoundly inadequate, horrifically inadequate – negligent.”  Becker works as a legal consultant on medical malpractice cases, but she is not involved in the Lundmark case.

“It not only deviates from acceptable nursing standards of care but in my opinion is reportable to the Board of Nursing,” Becker said of what happened in Beltrami County.

Lundmark’s death is the fifth connected to the Beltrami County jail since 2015.

One of those deaths is already under FBI investigation. Hardel Sherrell spent days in excruciating pain, became paralyzed and died in 2018 at the jail without getting significant medical care.

“What I see going on in Beltrami County is just complete disregard for human life,” said Leyderman.

Records show MEnD Correctional Care, the for-profit company contracted to provide medical care for inmates at Beltrami – and dozens of other county jails across Minnesota – did not send Lundmark to the hospital.

“He’s sitting in this jail knowing that something is horribly wrong with him and wanting to get help,” said his niece, Tamara. “That’s really traumatizing for all of us to think of him spending his last days like that.”

Beltrami County Sheriff Ernie Beitel declined an interview for this story. He referred questions to an attorney representing the county, who did not return a call seeking comment.

MEnD did not respond to a request for comment.

The night before his death surveillance video showed that as other inmates slept, Lundmark was doubled over in pain. At one point he fashioned his sheet into a makeshift sling on his bunk, trying to use it to lay against and take pressure off his abdomen.

The next morning, instead of seeing the jail nurse, Lundmark was placed in shackles for transport to the Clearwater County jail due to overcrowding in Beltrami County.

Lundmark said he was in severe pain, telling the guards that his stomach was hurting and he might have a hernia, records show. He couldn’t know an autopsy would later show he was already bleeding to death internally.

In addition to an “acute gastrointestinal hemorrhage” his autopsy listed heart disease and a blocked kidney as the causes of his death.

By the time he got to Clearwater an hour later, a guard for that jail would later write in a report that Lundmark was “falling all over the place.”

The Clearwater guard did not call for medical help, instead putting Lundmark into a holding cell while he booked eight other inmates.

By the time he turned his attention back, Lundmark told the guard he could no longer feel his legs and his stomach was burning. The guard told him he’d call a nurse once he got him into a cell.

The guard put Lundmark into another holding cell, but the sick man stopped responding to questions. Other guards were called in for help; one could only find a faint pulse as Lundmark threw up a brown tobacco like liquid. An ambulance was called, but Lundmark stopped breathing.

A guard tried giving him CPR before he was taken to a nearby hospital, where he was pronounced dead.

Flynn said there’s no merit to any accusations that he was mistreated at Clearwater County.

“We didn’t have any knowledge that he had a medical condition that required attention, and when we did, we quickly responded,” Flynn said.

The original Department of Corrections investigation into Lundmark’s death found no violations of state jail standards.

However, a recently released review by the Department of Corrections Office of Professional Accountability found problems that “raised numerous concerns” including a massive breakdown in communication.

The internal investigation found another inmate who was with Lundmark at Beltrami filed a complaint with the DOC, describing how Lundmark went through prolonged pain that went untreated by jail nurses, his repeated requests to see a doctor were denied, and his condition had deteriorated to the point that he was not eating, drinking, or leaving his bed.

That complaint was assigned to one inspector, who never spoke with the other inspector originally assigned to review Lundmark’s death.

The internal investigation also states both inspectors only would have checked to see if medical staff – not necessarily a doctor – had seen Lundmark without really reviewing the medical records key to understanding the case.

The Lundmark’s family attorney, Leyderman, said he is preparing to bring a lawsuit against the county. The family hopes that the lawsuit, along with the attention given to Lundmark’s case, prompts changes at the jail “to restructure how they operate to avoid this happening again to anyone else’s loved one,” said Traci Lundmark.

“I don’t understand how people can be so callous,” she added.

The family says to add insult to injury, in March, Beltrami County sent a notice to Lundmark’s brother, seeking repayment of more than $32,000 from Bruce’s estate for the medical care provided to him while in the jail.

His family said Lundmark died penniless, and don’t know if they’ll have to pay.

“It was more or less like them stepping on someone when they are down already,” said Bruce’s niece Traci. “I wasn’t sure if it was an intimidation tactic from them, so we all worried if the county now was going to start playing dirty with us. We still all actually wonder that.”