VERIFY: Is the Super Bowl the biggest sex trafficking event in the world?

You've likely heard reports that Super Bowl events can be the “Super Bowl of sex trafficking.” But others contend the problem during the world-famous game is being exaggerated and can take away from the real issue authorities deal with every day. So what's the real story? 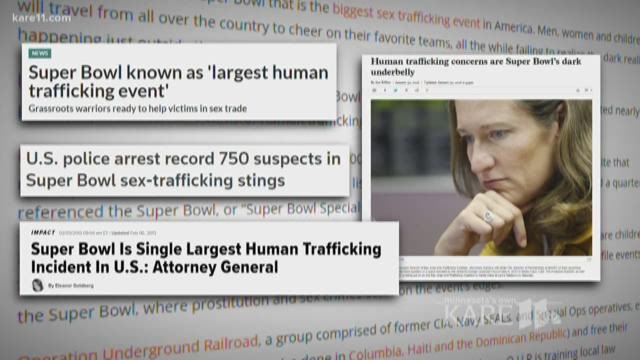 Some go as far as to call it “the single biggest sex trafficking event in the world.”

But others contend the problem during the world-famous game is being exaggerated and can take away from the real issue authorities deal with every day.

So what's the real story?

We wanted to #VERIFY, so we contacted Minneapolis Police Sergeant Grant Snyder, who heads MPD's Human Trafficking Team. He's taking the lead on planning the law enforcement response in Minnesota leading up to the Super Bowl. He traveled to Houston last year and learned from their response during the Super Bowl.

U of M Researcher Lauren Martin has done many studies on sex trafficking in Minnesota, and recently reviewed all the media coverage and academic studies connecting sex trafficking to the Super Bowl.

Washington County Attorney Pete Orput, whose office has tracked the number of sex-trafficking related ads posted to the website backpage.com every day since the beginning of 2016 in an effort to track local demand.

When asked if traffickers will bring victims into the Twin Cities specifically for the event, Snyder said, “I think they will. I know they will.”

Sgt. Snyder says there is hard evidence that is true, and he personally saw it last year.

“In the weeks leading up to the Super Bowl, we had intelligence, information current about traffickers here who were going to be bringing victims to Houston for the Super Bowl,” Snyder said.

“From what the academic literature shows, yes,” Martin said.

So we are able to #VERIFY the claim that sex traffickers bring victims into host cities specifically for the Super Bowl.

However, that doesn’t mean it’s a “bigger” problem than usual.

“The Super Bowl just increases the concentration of people that are willing to buy sex, it doesn't mean that sex is a bigger problem,” Martin said.

So is the problem overblown?

And we were able to trace that claim to a quote in a 2011 USA Today article, where former Texas Attorney General and current governor Greg Abbott said just that, but without offering evidence or numbers.

Cindy McCain repeated the claim on camera the next year.

Every year since, authorities in Super Bowl host cities announce arrest numbers for sex trafficking and prostitution, but without much context.

Both Snyder and Martin point out sex trafficking is here year-round, and a sting done at any time would net higher arrest numbers.

Martin says the Super Bowl is not the biggest sex trafficking event in the world.

“A lot of the news coverage tends to exaggerate the impact of the Super Bowl or it tends to look for a big splash,” Martin said. “Any event, any consumer trade show that would bring a large number of people to the city, would likely have a similar impact.”

And Sgt. Snyder agrees with her.

“Is the Super Bowl the single biggest sex trafficking event in the world? I don't think so,” Snyder said. “That's really no different and I don't think it's any larger than just the population in general.”

He believes the only factor leading to more sex trafficking during the Super Bowl is a population increase in the host city -- that it has nothing to do with the “type” of people coming in for the big game. And without giving context to arrest numbers, he believes they can appear misleading.

“I've looked at her findings I've read other ones that say there is no correlation. Well, that's not my reality. My reality is the Ryder Cup comes, we went out and trained the Scott and Carver County Attorney’s office for what to look for. They did, and the numbers went up,” Orput said.

Orput says the number of advertisements spike during major sporting events, and he believes the demand rises for reasons beyond simply a population increase. He believes it’s also the type of “event” that matters.

”People want to go out after whatever brought them here to be entertained. Strip clubs start advertising around things like that, conventions, mostly sporting events, and people go out drinking,” Orput said. “If statistics don't bear it out, the facts bear it out. The victims bear it out. And that's all I really care about.”

So, while we can #VERIFY sex trafficking goes up during the Super Bowl, we can't #VERIFY that there's any reason other than the simple fact more people are here. And whether the problem is exaggerated? That's where our sources disagree.