Failure to Treat: She spoke at his funeral, but veteran’s family says she played a part in his death

Struggling with mental health issues, he turned to drugs and then a state-licensed program for help. His family say the veteran just got worse. 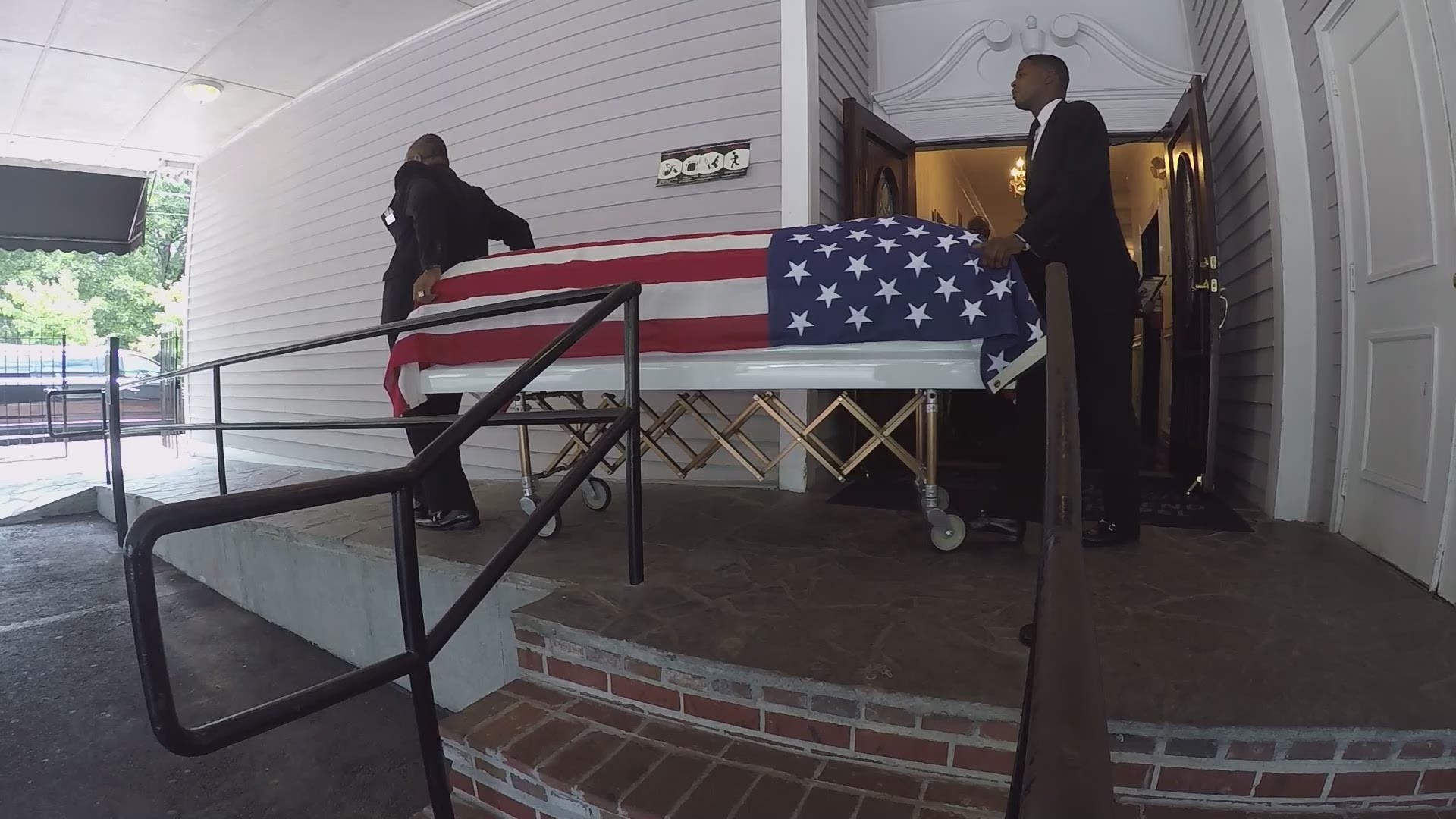 ATLANTA, Georgia — In a few weeks, Georgia Governor Brian Kemp will appoint members of a special commission tasked with improving the care of people suffering from substance abuse and behavioral health issues.

Melvin Nibbs and Amelia Jackson believe one program contributed to their brother’s death.

When Steven Nibbs got out of the Navy more than 20 years ago, he moved in with his brother, Melvin, in Atlanta. He soon noticed Steven acting strange.

“We’d just be sitting down and it’s like there’s voices going on in his head. He’s always paranoid, going to the window and stuff,” said Melvin Nibbs.

Jackson believes her brother had schizophrenia.

“One moment he wanted to be himself and the next minute he wanted to be Tina Turner or somebody. That’s how I put two and two together, and I understood that okay, he’s really suffering mentally,” said Jackson.

When Steven’s siblings couldn’t care for him anymore, he landed on the streets of Atlanta, homeless.

That’s when he met a woman named Christine Nwankwo-Richards.

According to records reviewed by 11Alive's The Reveal, Steven was a client of Agape.

“I looked beyond his challenges. I know his challenges, he tried his best, he did everything he could,” she said on August 9, 2018 during her eulogy.

Steven’s siblings say Nwankwo-Richards cared for Steven for 15 years. During that time, instead of seeing their brother get better, they say, he appeared to get worse.

“She’s also supposed to make sure he is in a living, safe situation and none of that was going on,” said Jackson.

Steven lived in an apartment complex run by a company called Gift Transitional Home, which is also operated by Nwankwo-Richards.

According to city records, Atlanta police have responded to the apartment at least 137 times since 2014. Some of the calls were for allegations involving rape, burglary and suicides.

The last time Nibbs and Jackson saw their brother alive was July 22, 2018, panhandling at the intersection of Peyton Road and Martin Luther King Jr. Drive.

The next day, an alleged drunk driver hit and killed Steven.

“What he’s been through, he didn’t have to go through that,” said Nibbs.

Three months after Steven’s death the state did investigate Agape.

According to records obtained from the Georgia Department of Community Health, a state inspector cited Agape with dozens of violations. Some of the deficiencies included failing to conduct treatment plans, drug screens and not doing psycho-social assessments of its clients. 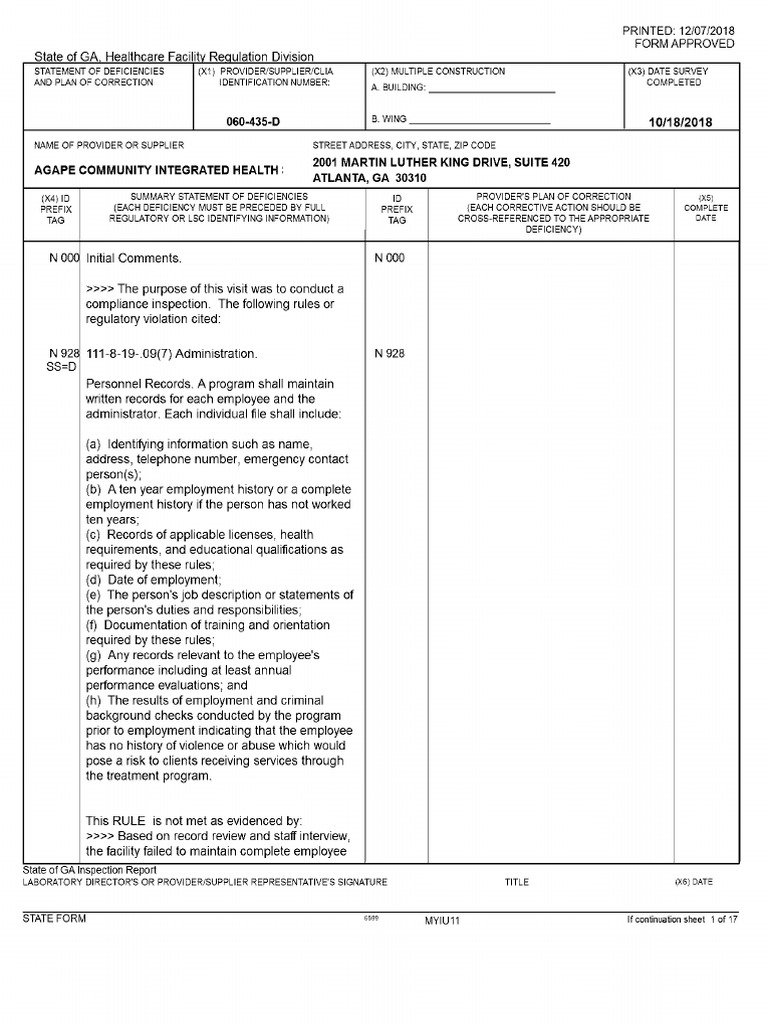 It turns out, Agape didn’t have to. Instead, her business moved office locations a few miles away. After a re-inspection, the state gave Agape a clean slate with a new license.

“It makes no sense at all, and yet sadly, it’s something that I’ve seen with other facilities as well,” said Heather Hayes, a licensed counselor in Georgia and a nationally-known drug interventionist.

“There is no monitoring. There is no regulation. So, programs will come in, they have one inspection when they open and that’s it. There’s no follow-up inspection unless someone makes a complaint,” said Hayes. “So, how can you even begin to care of vulnerable clients and their families when you don’t have that in place.”

“I think having proper oversight is extremely important, depending the type of facility, depending on the relationship between the state and that facility. There’s a whole host of different ways the state can be involved and maybe that means additional oversight,” said Tanner.

During Steven’s funeral, Christine Nwankwo-Richards praised her former client and the work she did for him.

A year later, she wasn’t so eager to speak about Steven or her company when The Reveal's Andy Pierrotti reached out to ask about her relationship with Steven.

11Alive called, emailed and sent a certified letter to Nwankwo-Richards requesting an interview.

“When Ms. Christine spoke of providing services to Mr. Nibbs, she did not specify which of her companies that provided services to him. She spoke in general terms and if you choose to categorize that statement to mean drug counseling, please be advised that we will construe that to mean that you willfully chose to deceive people with this incorrect information,” wrote Nwankwo.

Agape’s attorney said the state violations had nothing to do with patient care.

“Agape had deficiencies related to its filing system and Human Resources. None of these deficiencies had anything to do with patient care and patient management, but you have decided to tarnish my client's image with your inaccurate reporting,” wrote Nwankwo.

The Reveal is an investigative show exposing inequality, injustice, and ineptitude created by people in power throughout Georgia and across the country. It airs Sunday nights at 6 on 11Alive.

More of The Reveal:

Marine mom works through heartache and humiliation to honor her son

Early Release, Early Death: 'That's not the way he deserved to die'

Into the woods: Where is DeCorrius Jones?