President Trump has a rare opportunity to move the Supreme Court to the right, with his pick to replace retiring Justice Anthony Kennedy. And Republicans plan an expedited replacement process. 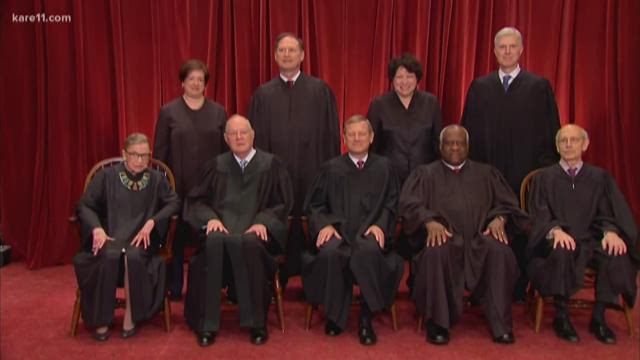 MINNEAPOLIS -- The intersection of law and politics will be in sharp focus this summer, as President Trump names a replacement for retiring Supreme Court Justice Anthony Kennedy.

The president says he wants to announce a pick soon, and Senate Judiciary Committee Chairman Chuck Grassley of Iowa, said Wednesday he wanted to begin confirmation hearings as soon as possible after the pick is announced.

Kennedy, who was appointed to the High Court by President Reagan in 1988, had become the swing vote in many closely-decided cases, often siding with the court's four conservative justices, but at times joining the four more liberal members.

"The Obergefell decision that permitted gay marriage was a major deviation from the other four conservative justices," political scientist Steven Schier told KARE.

"And I think what Trump and the Republicans in the Senate are looking for is a 100 percent conservative, someone in the mold of the late Justice Antonin Scalia."

The White House released a list of 25 likely candidates, which includes federal judges Joan Larsen and Amy Coney Bryant, both of whom clerked for the late Justice Scalia.

"All of the judges on the list are people that you would say want to figure out what the law is, not what the law ought to be," Aaron Van Oort, an appellate attorney in the Minneapolis office of Faegre Baker Daniels, told KARE.

Van Oort, who also clerked at the Supreme Court for the late Justice Scalia, said the president will be looking for jurist who, like Scalia, take an originalist approach to applying Constitution law.

"They think that the Constitution is what it was understood to be by people at the time it was passed."

Among them is Judge David Stras, who spent more than seven years on the Minnesota Supreme Court as an appointee of then-Gov. Tim. Pawlenty.

Before joining the court, Stras taught at the University of Minnesota law school and was a counsel at Faegre Baker Daniels with Van Oort.

"All of the people on the president’s list are relatively young for this sort of job," Van Oort explained.

"The goal of a president is to get someone who will be there for awhile, and Judge Stras fits there at age 44."

But much of the early buzz surrounded Thomas Hardiman of Pennsylvania, a judge in the 3rd Circuit Court of Appeals. Hardiman was reportedly the first runner-up to Neil Gorsuch, who was President Trump's first Supreme Court appointment.

"One would think if he got that far the first time, he'd definitely be one of the people being considered this time around," Van Oort said.

Democrats called on Senator Grassley to hold off on confirmation hearings until after the mid-term elections, the way he halted hearings on President Obama's final Supreme Court nominee Merrick Garland in 2016.

But Republicans hold a 51 to 49 seat advantage in the Senate, so there's little Democrats can do to block the president's appointment.

In the past, the minority party could hold up a nomination with a filibuster which takes a supermajority, or 60 votes, to end. But Senate rules were changed, barring filibusters for Supreme Court confirmations.

That won't stop Democrats from trying to derail a nominee they oppose.

"I mean this is all about intense party politics. It’s one of the big political battles of the Trump presidency," Schier remarked.