If tested for DNA, the kits could help law enforcement catch serial rapists. But the state has no plans yet to test them.

In an email last week, Bureau of Criminal Apprehension spokesperson Jill Oliveira acknowledged the agency is currently working to determine whether approximately 2,700 additional sexual assault kits need DNA testing.  They were not included in the state’s 2015 count.

Whatever the final number, Minnesota has no immediate plans to test them, according to interviews and records obtained by KARE 11.

“We plan to test these at some point, but we’re not certain when we’ll have the resources to do those,” said Catherine Knutson, the BCA’s deputy supervisor of forensic science services.

Even though the rape kits in question were sent to the BCA by local police for testing, many were never fully tested for DNA.

According to a memo written by the BCA in March, many sexual assault kits sent to the BCA lab from 2001 to 2012 were initially tested only for the presence of fluids that could contain DNA. If fluids were found, the BCA would notify local police and wait for instructions.

“As far as we were concerned, if they didn’t come back to us, we assumed that there was nothing else to be done,” Knutson said.

Kits were not tested for DNA unless directed by law enforcement, Knutson said.

When DNA tests were not done, information from those kits were never entered into a national suspect database, the Combined DNA Index System (CODIS).

Since the kits were opened and testing for bodily fluids was started, records indicate the kits are now a collection of swabs, slides or lab reports – making it more difficult to determine exactly how many were never tested for DNA.

Records show the BCA has known about the previously unreported test kits for months – and has been working quietly to determine the extent of the problem.

At one point earlier this year, records show officials feared there could be as many as 8,000 untested kits – more than double the number the state had counted in 2015.

At a meeting in May, members of a multidisciplinary team working on the sexual assault kit testing backlog expressed concerns “if/when this news is released,” according to records.

Since then, Oliveira said the BCA determined the actual number is smaller. In an email she wrote the agency “has eliminated more than 4,300 cases of the 7,081 because they were determined to have been fully tested.”

As of last week that leaves roughly 2,700 kits still being evaluating. 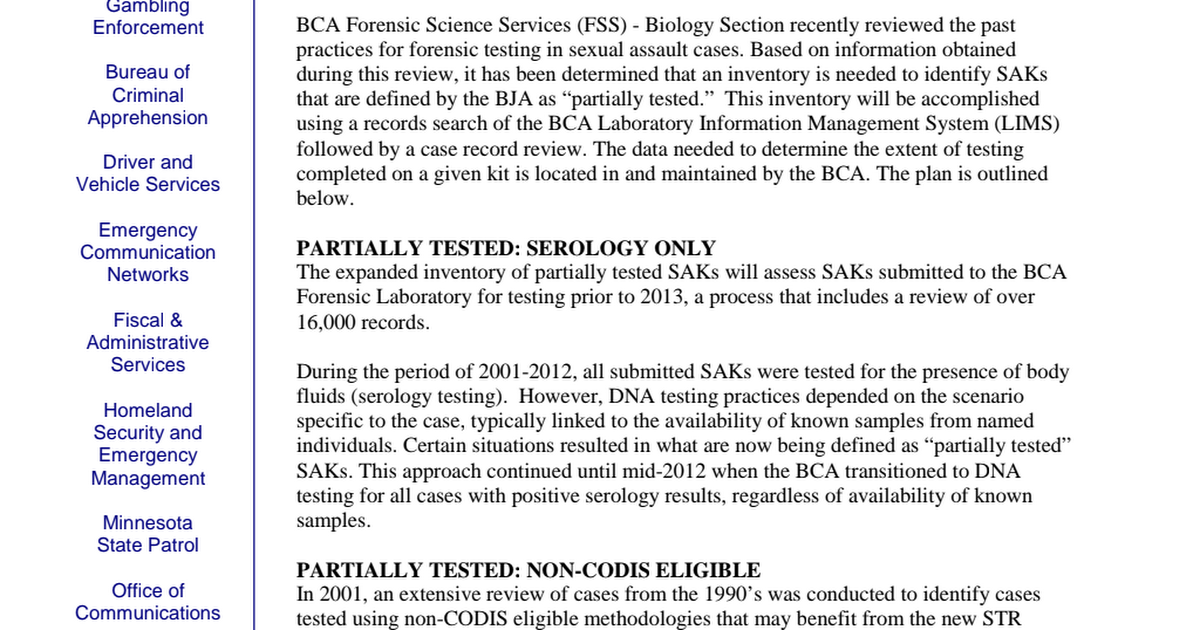 Victim advocates were surprised the recently discovered kits were not counted in 2015, when the legislature mandated that the BCA provide a count of untested kits across the state. That law specifically required the BCA to include kits that had “been submitted to the bureau for DNA analysis, but that analysis has not been completed.”

O’Neill helped pass the 2015 law.  She believes that failing to conduct DNA tests and send the results to the national CODIS database hampers law enforcement efforts to identify serial predators.

“It means that here in Minnesota we have serial rapists out on our streets free to rape,” she said.

Jude Foster, a policy coordinator with the Minnesota Coalition Against Sexual Assault, also said those kits should be tested in hopes of catching serial rapists.

“I think we could identify patterns, and from what I’m hearing from other [agencies] across the country they are identifying repeat offenders,” Foster said.

Minnesota isn’t the only state with partially tested rape kits, said Angela Williamson, who manages the Sexual Assault Kit Initiative for the U.S. Department of Justice (DOJ). The DOJ provides grant money to states across the country to help reduce the backlog of untested rape kits.

Utah, for example, has tested half of its 2,100 partially tested kits, said Krystal Hazlett, a testing coordinator for the state.

Of those tested, 700 cases have been uploaded to the national DNA database, resulting in just over 300 hits that matched suspects in other cases, Hazlett said.

Two people have been charged, including a man accused of raping a woman at gunpoint 12 years ago.

“That case is a prime example of why we test these kits,” Hazlett said.

Despite the public scrutiny given to rape kits, Minnesota law still allows police to withhold kits from testing if they find it “would not add evidentiary value” to a case.

O’Neill now says she wants to revisit that law and require that all kits be tested as long as rape victims agree.

Ultimately, that DNA should be uploaded into a national database meant to catch serial offenders whenever possible, she said.

WATCH:  Brandon Stahl, the newest member of our team, talks about the investigation with A.J. Lagoe.