Keillor tells Jana Shortal his accuser 'enjoyed flirtation, as many people do'

Jana Shortal talks with the reporters at MPR who published an investigation on the professional world of Garrison Keillor -- and Keillor responds to the story in an email exchange. 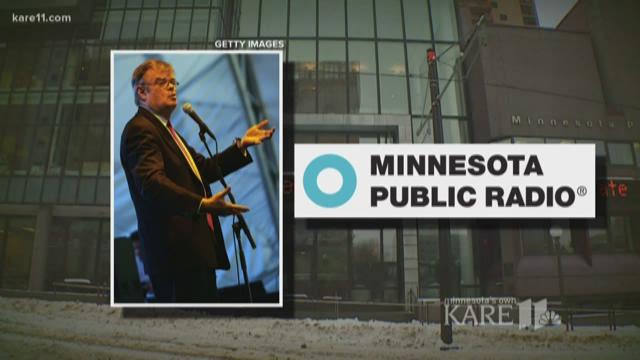 ST. PAUL, Minn. - For weeks, everyone has wanted to know exactly what Garrison Keillor did that led to Minnesota Public Radio cutting all ties with him.

On Tuesday MPR’s parent company CEO, Jon McTaggart, told the public it happened after MPR received allegations of dozens of sexually inappropriate incidents involving Keillor and a woman who worked for him on the Prairie Home Companion show.

And coming on Tuesday, an investigation by a team of MPR journalists into the professional world of Garrison Keillor.

The investigation was titled: "For some who lived in it, Keillor's world wasn't funny."

The work was done by three reporters. One of them, Laura Yuen spoke to KARE 11 on Wednesday.

We asked quite frankly what it was like to investigate a person who for decades was in the MPR ranks.

“I have to say for as awkward as it may have been at times, I never once got any pushback from company management or any discouragement from approaching the story,” Yuen said.

“The way I look at it is, I am just covering it like I would any other story. We have a person who is very powerful in the state, beloved, involved with a story where we were not really getting the full picture.”

The full picture wasn't being given, Yuen said, by Garrison Keillor or by MPR's parent company, American Public Media Group.

When this story broke last year, APMG only said MPR cut ties with Keillor because of inappropriate behavior with a female colleague.

“It began with frustration because from the very beginning the company leaders did not say what exactly prompted them to sever ties with Garrison Keillor,” Yuen said.

Their investigation led them, Yuen said, to more than 60 people who worked with or crossed professional paths with Keillor.

The story MPR published was one that Yuen says paints a picture of what Keillor was like to work for and with; some they spoke with said Keillor was a good boss, others said his moods were of the like that created a hostile environment, and others said he acted inappropriately.

Talking to so many people was important, Yuen said, for context.

“Were these one-off incidents or were these data points that illustrated a much bigger and more complex picture and we wanted to make sure that for every story that someone told us about Garrison we could corroborate it with two, three, four and sometimes five other people. That was important to us because a lot people who spoke did so on condition of anonymity,” Yuen explained.

This all came within the same hour Jon McTaggart, the CEO of APMG, released the open letter online talking about why the company parted ways with Keillor.

McTaggart said it was not because of the reason Keillor has said publicly, that he once touched a woman's back.

McTaggart said MPR was told by a lawyer of one of Keillor's co-worker's that he engaged in dozens of sexually inappropriate incidents.

McTaggart says those were detailed in a 12-page letter to MPR, a letter McTaggart says Keillor and his attorney were notified of and able to respond to before MPR decided to sever ties with him.

In the first he told her "there is nothing in MPR's letter that is new" and when she asked him about the investigation by Yuen and her colleagues, he said there was "no news there" and that it was "hardly what he would call an investigation."

Shortal then asked him specifically about the allegations McTaggart spoke of in the open letter. Keillor said, "the allegations are untrue…whatever flirtation occurred between the complainant and me was mutual, believe me." He added that "she enjoyed flirtation, as many people do."

Jon McTaggart’s letter was in response to a blizzard of listener anger, all of it richly deserved, after MPR expunged shows that people loved. And listeners smelled a rat. Listeners know me far better than MPR management does and they know I’m not abusive. Management, when it heard a complaint back in October, did not have the good manners to call me, a part of MPR for fifty years, and sit down with me face-to-face and talk about what had happened. If they had done that simple courteous thing, this all would’ve been avoided. Instead, they have been duplicitous from first to last, starting with how they began their Potemkin“ investigation” up until the very moment when they issued a letter in the midst of mediation where we had agreed to not to make any public comments.

How to respond to so many untruths in a short space? The woman who complained was a friend, had been hired as a free-lance researcher, an employee of mine, not MPR’s, working a job that she did from home by email. I hardly ever saw her in the office. Our friendship – which was mutual, reciprocal and respectful -- continued in frequent emails about our kids and travel and family things that continued to my last show and beyond. She signed her emails “I love you” and she asked if her daughter could be hired to work here, and so forth. She still features “A Prairie Home Companion” prominently on her Facebook page.

Her complaint was drawn up by her attorney, a highly selective and imaginative piece of work. MPR depended on the complaint, it never spoke to the complainant.

If I am guilty of harassment, then every employee who stole a pencil is guilty of embezzlement. I'm an honest fiction writer and I will tell this story in a novel.

Beyond that, I don’t know what comes next. I only know that I’m a writer and I have better things to do than fight with Jon McTaggart or his committee of faceless people who are in a panic. And I’m glad not to have any connection with an organization that operates like that.