A major injury this past fall kept one of the country's best wrestlers here in Minnesota instead of spending the season at the Olympic Training Center in Colorado Springs. 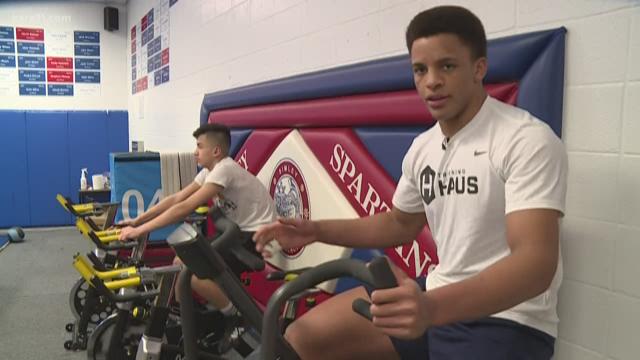 INVER GROVE HEIGHTS, Minn. — There’s been an extra spring in the step of the Simley wrestling team ever since its star senior Daniel Greg Kerkvliet made his comeback.

“At the start, it was a little bit like getting the hesitation out of there,” Kerkvliet said. “I’m getting back to my old self.”

Back on the mat since January, the future Ohio State Buckeye has been dominating the heavyweight division and has a chance to make it four individual state titles.

“That’s definitely the goal right now,” Kerkvliet said. “Everything in my life revolves around wrestling. I feel like I’ve got something back that I’ve been missing.”

“The iPhones are now out at every dual meet we go to,” Simley wrestling coach Will Short said. “Right around the heavyweight weight class, you know something fun is going to happen.”

But what really makes this Simley squad fun, is how it’s not just all about Greg.

In total, 10 Spartans are ranked – eight in the top 3 of their divisions. That includes a fantastic four-some of sophomores.

“These guys are starting to make noise on the national level,” Short said. “Yet, they still haven’t gotten the title here in Minnesota. They’re a very hungry group of guys.”

On the season, Simley is ranked second in the state, top 25 in the nation and is in the hunt for a 12th team title. But to bring home the hardware, the Spartans will have to square-off with number one Kasson-Mantorville in sections.

“We’ve had a countdown since the day we lost to them in sections (last year),” sophomore Ryan Sokol said. “We’ve been looking forward to it. We have the timer going right now.”