On that same day 55 years ago, doctors at HCMC performed the first ever organ transplant in the Midwest. 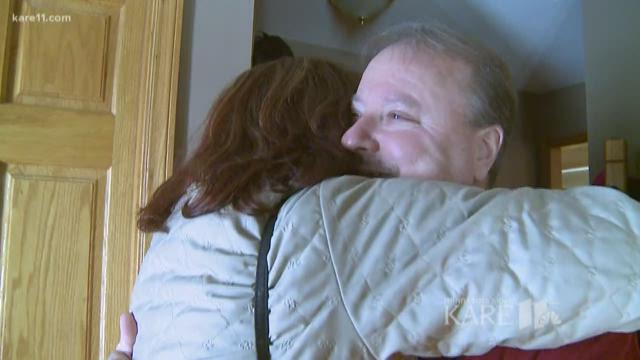 HUDSON, Wisc - The day before Valentine's Day, a kidney donor and recipient walked into the Hennepin County Medical Center to meet with their doctors.

On that same day 55 years ago, doctors at HCMC performed the first ever organ transplant in the Midwest.

"It's amazing to think it's been going on that long," organ donor Molly Lannon says.

Doctors say the procedure has changed a lot since then.

The procedure now requires only a small incision.

The hospital stay after the procedure has also shrunk to less than a week.

Doctors have seen several unique connections between donors and recipients during that time, but they've never seen a connection quite like Molly and Kevin's.

There really isn't a title to describe the connection between Molly and Kevin.

"The best way to explain it is my wife's dad is her ex-husband," Johnson laughs. "I'm only two years younger and my kids gave her the nickname of grandma Molly."

Kevin and Molly have known each other for nearly 25 years and stayed close friends after the divorce.

They're not what you would call blood relatives, but come Tuesday, the two of them will become just about as close as you can get.

After Tuesday morning the two friends/former family members will share a pair of kidneys.

About five years ago Johnson went to his doctor for his annual physical.

His doctor noticed high numbers with his kidneys and referred Johnson to a specialist.

A short time later Johnson was diagnosed with kidney failure and was left with the options of going onto dialysis or getting a new kidney.

"My kids posted it on Facebook and Molly saw it," Johnson explains.

Doctors say the odds of getting a match between two non-blood relatives is about 100,000 to 1.

But Lannon decided to get tested anyway.

"It just got further and further, and here were are today."

The two friends/former family members are hoping their unique story will inspire others to consider donating, to help out a stranger, a friend, or even a family member with a unique connection.

"It is a sacrifice, but it saves people and I couldn't be more grateful," Johnson says.