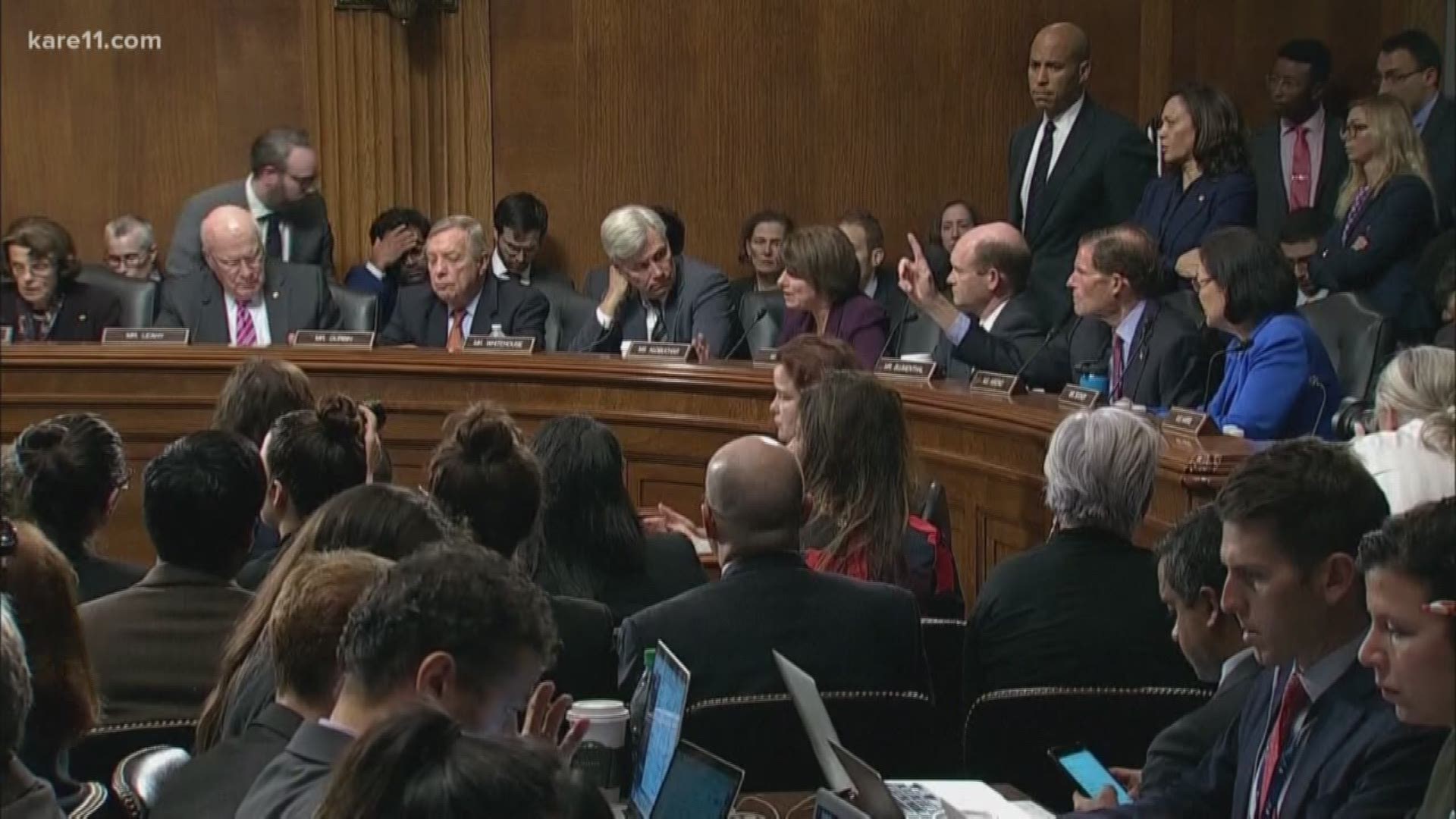 MINNEAPOLIS -- Sen. Amy Klobuchar's voice cracked with emotion at times during a 15-minute speech to colleagues on the Senate Judiciary Committee Friday, as the Minnesota Democrat pushed for an FBI probe into the claims made by Christine Blasey Ford against Judge Brett Kavanaugh, the Supreme Court nominee.

"I don’t want to hear about respecting Dr. Ford, when we are not giving her the respect of having an investigation of the case she made to us yesterday!" Sen. Klobuchar declared.

"There was a lot of chest beating that went on yesterday on the other side. And it was pretty effective, I guess, if the goal was to distract us and the American public from what they had heard in the morning."

A day earlier the Senate Judiciary Committee spent nine hours taking testimony, first from Ford and then from Kavanaugh, about Ford's accusation that Kavanaugh, as a high school student, tried to rape her at a house in Maryland.

Klobuc﻿har had already decided to oppose Kavanaugh's nomination because of his views on the expansive powers of the presidency -- including his stand that sitting presidents shouldn't be subject to investigations. But she thought the Ford had been a credible witness a day earlier in committee.

Democrats had protested the fact that no other potential witnesses had been allowed to appear in the committee. Klobuchar pointed out that President George H.W. Bush ordered a three-day investigation into Anita Hill's accusations against then-nominee Clarence Thomas in 1991.

"I would submit to my friends across the aisle that this is not a he-said/she-said. This is a he-said/they- said."

"This was a woman with no political background who made an attempt to call the front office of her Congresswoman. That’s what she did," Klobuchar told her colleagues. "She did this before the nominee was even picked."

Republicans asserted Kavanaugh had been through six FBI background checks previously in his years of government service, and that most sexual predators don't strike just once. Kavanaugh's defenders also questioned the timing, complaining that ranking Democrat Dianne Feinstein should've come forward with Ford's story much earlier.

Klobuchar decried that line of reasoning.

"You may not like how this came in at the last minute, I would’ve like to have known about it earlier too, but I didn't. The question is, what you do when it happens? And when it happens, you don’t just put it under the rug!"

The committee's vote to forward Kavanaugh's nomination to the full Senate went as expected. It was a straight party line vote of 11 Republicans versus 10 Democrats.

The surprising twist came when Arizona Republican Jeff Flake asked for a one-week delay in the floor vote, to allow for a one-week FBI investigation into Ford's claims. Senator Flake had announced earlier in the day he supported Kavanaugh's nomination, prompting a woman to angrily confront him as he entered a Capitol elevator.

Klobuchar said Flake and Sen. Lisa Murkowski of Alaska had been talking to Democrats behind the scene about a possible delay, and Democrats had agreed to a one-week investigation was better than none.

"My role was to encourage them, to work with them, and to basically say we’re gonna support you," Klobuchar told KARE. "We’re not going to say, 'Why isn’t this a month-long investigation?' but we’re going to at least say let’s give this one week."