As of Thursday evening, residents remained at the encampment. 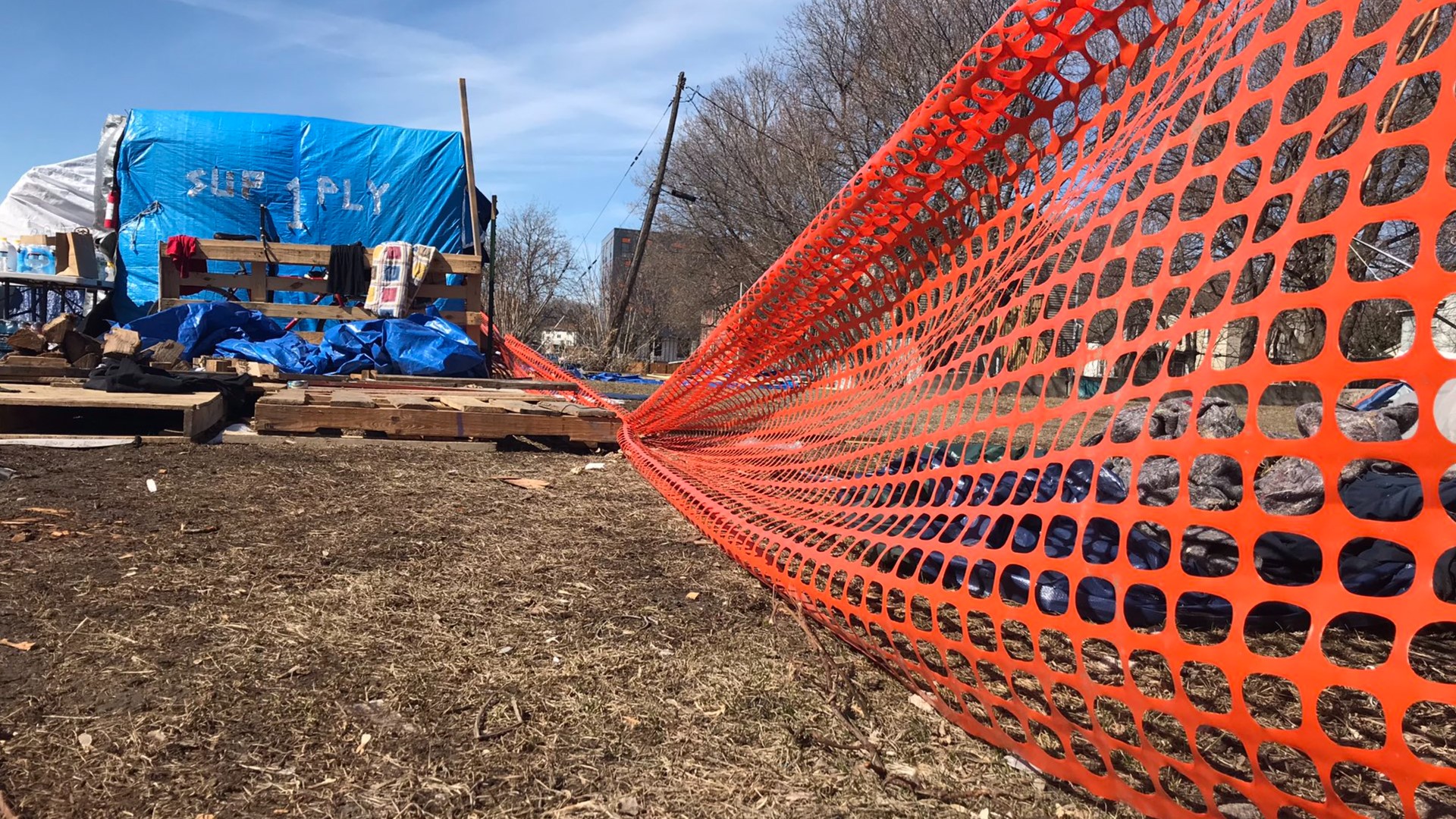 MINNEAPOLIS — Minneapolis police say five people were arrested after an altercation between people at a homeless encampment and officers who were attempting to clear them out.

According to the Minneapolis Police Department, at about 6:45 a.m. Thursday officers were assisted by the Minneapolis Health Department and Community Planning and Economic Development Department (CPED) to close the encampment in the Harrison neighborhood due to "contamination, fire hazards, and other health and safety risks."

Police say they began taping off the area so equipment could be brought in, and at that time three men began swearing at officers, attracting more people to the area.

A police press release says that people began tearing down the police tape and some individuals were throwing snow balls at officers and squad cars. At this point, officers called for reinforcements and when they arrived, the release says around 25-30 people were "actively challenging" police officers and "pushing against their line." Police say one person physically attacked an officer, and while arresting the attacker, more people began attacking officers. The department says one officer was tackled from behind and another officer was punched in the face. Bystander video captured some of the altercation, but it's unclear what led up to the incident.

This is the notice posted at the site. According to MPD, officers were called out to help close encampment due “to site contamination, fire hazards, health and safety risks.” Residents tell us they were only given two days notice, with few options for shelter. @kare11 pic.twitter.com/9SiERfZENW

"Minneapolis police came about 7 o'clock (a.m.), we heard sirens coming," said Mandla Xaba, a resident at the encampment. "Contrary to what I was told in the meeting with CPED, there were no vans coming to help people relocate, this was a police force coming to move people inhumanely."

During a press conference earlier Thursday morning about a new initiative being taken by the MPD to curb violence around George Floyd Square, Minneapolis Police Chief Medaria Arradondo commented on the incident.

"From the limited video that I have seen, I was appalled by the actions of those community members that attacked my officers," said Arradondo. "I'm thankful they weren't seriously injured."

According to a press release, after officers made the five arrests, they cleared the scene. Five officers were examined by paramedics for injuries sustained during the incident.

Members of the Harrison Neighborhood Association – who support the encampment – say the encampment has been up throughout the winter, and are now joining residents to stop what they are calling an "unfair" eviction.

The City of Minneapolis released a statement saying notices were posted on Monday and added that there is enough room in the shelter system for everyone at the encampment. The full statement reads:

Due to site contamination, fire hazards, and other health and safety risks, the City decided to close the encampment near Second Avenue and Girard Avenue North. Notices posted Monday morning shared the City’s plans with those at the campsite and provided numbers to call to find safe shelter.

The City had previously scheduled a closure for Feb. 12. The date was extended to Feb. 26, due to the extreme cold temperatures. The closing was delayed after City staff and outreach teams met on Feb. 24 with people at the encampment, who told staff they needed additional time to secure more permanent housing. The City did not establish a new closing date at that time, but City staff communicated that the camp will be closed in the near future due to public health risk of site contamination, and that the closure could happen sooner if conditions at the site changed.

Currently, there is enough capacity in the shelter system to provide alternative accommodation for everyone at the encampment. As of this morning, there were 29 men’s shelter beds and 46 women’s shelter beds available in the shelter system. Outreach workers have been engaging with residents to connect them to shelter and housing resources and will continue to do so until the encampment is closed. The City will also provide transportation to encampment residents to help them get to shelter, housing or to stay with a friend or family member on the closure date.

Safety risks at the encampment have escalated to the point where immediate closure is warranted to protect the safety of encampment residents and the community. We do not believe it is safe for anyone to stay outdoors and we encourage all of our unsheltered neighbors to engage with outreach providers and find shelter whenever possible.

As of Thursday evening, residents remained at the encampment.