The Minnesota Department of Agriculture says the seeds should not be planted and should be reported to the state. 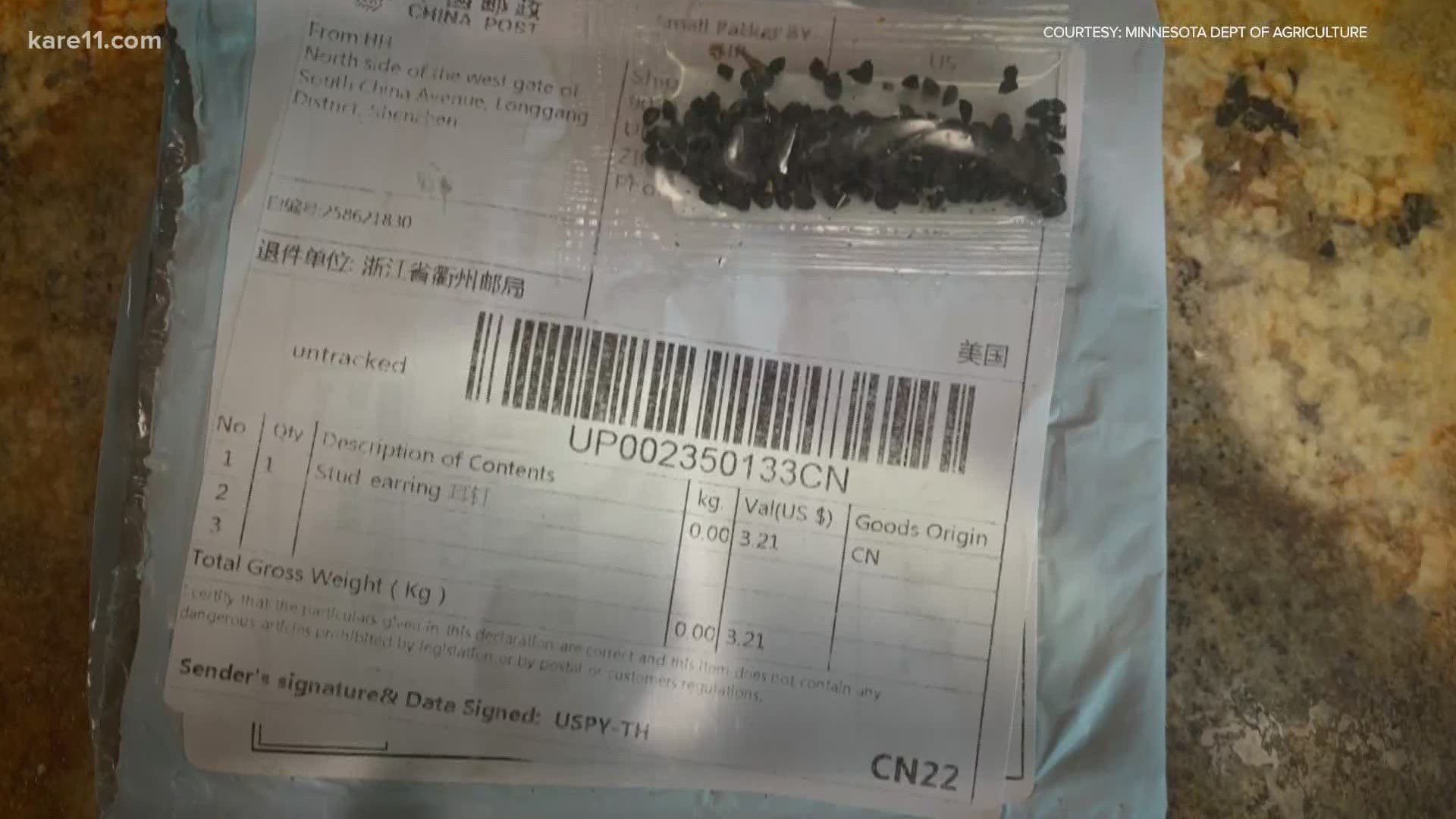 ST PAUL, Minn. — The Minnesota Department of Agriculture (MDA) is cautioning Minnesotans about mysterious unsolicited packages of seeds arriving in some mailboxes in the state.

According to photos provided by MDA, the small packages can sometimes have a postmark from China, and appear to list a piece of small jewelry in its contents, along with a small package of seeds. A photo of a similar package shows similar seeds with a return address of Kyrgyzstan, along with planting instructions in English.

As of July 31, MDA said more than 700 Minnesotans have made reports to the department about receiving the mystery seeds.

The source and motivation behind the mailings is under investigation.

MDA officials say anyone receiving such a package should not open the package or plant the seeds, and should not throw them away. Instead, recipients should keep the original packaging and contact the Minnesota Department of Agriculture by email, or by calling the state's "Arrest the Pest" hotline at 888-545-6684.

"We’re uncertain what these seeds may be and why people are receiving these unsolicited packages," MDA Seed Unit Supervisor Denise Thiede said in a statement. "Until we know more, we encourage people to contact us because of the risk they may pose to Minnesota agriculture and our natural landscapes."

The MDA says anyone who has planted the seeds should destroy them by pulling up the plants the double-bagging them along with the surrounding soil, then place them in the trash. MDA said plants and soil are usually prohibited from trash collection, but that method is recommended in this situation.

Minnesotans have received unsolicited packages of seeds appearing to come from China. If you've gotten unsolicited seeds:
-Don't throw them away.
-Don't plant the seeds.
-Contact Arrest the Pest at 1-888-545-6684 or arrest.the.pest@state.mn.us
More: https://t.co/CmeMHWUNjS#MNAg pic.twitter.com/yLIAMaZLyn

Similar mystery seed packages have been reported in other states, including Louisiana, Utah, Virginia, and Washington, with ag officials in those states also concerned about the potential of invasive plant species contained in the seeds.

MDA will coordinate with recipients on how to send the contents to the MDA Seed Program.

According to a news release, MDA officials are working with the U.S. Ag Department and its Smuggling Interdiction and Trade Compliance Program to identify and destroy the seeds.

The USDA is calling the situation a "brushing scam," where people are sent unsolicited items from a seller who then posts fake customer reviews to boost sales.

RELATED: Have you seen this weed? Invasive Palmer amaranth found in Winona County