The sudden death of musical genius Prince Rogers Nelson shocked fans worldwide and set off a wave of grief and reflection on the legacy of the pop superstar. 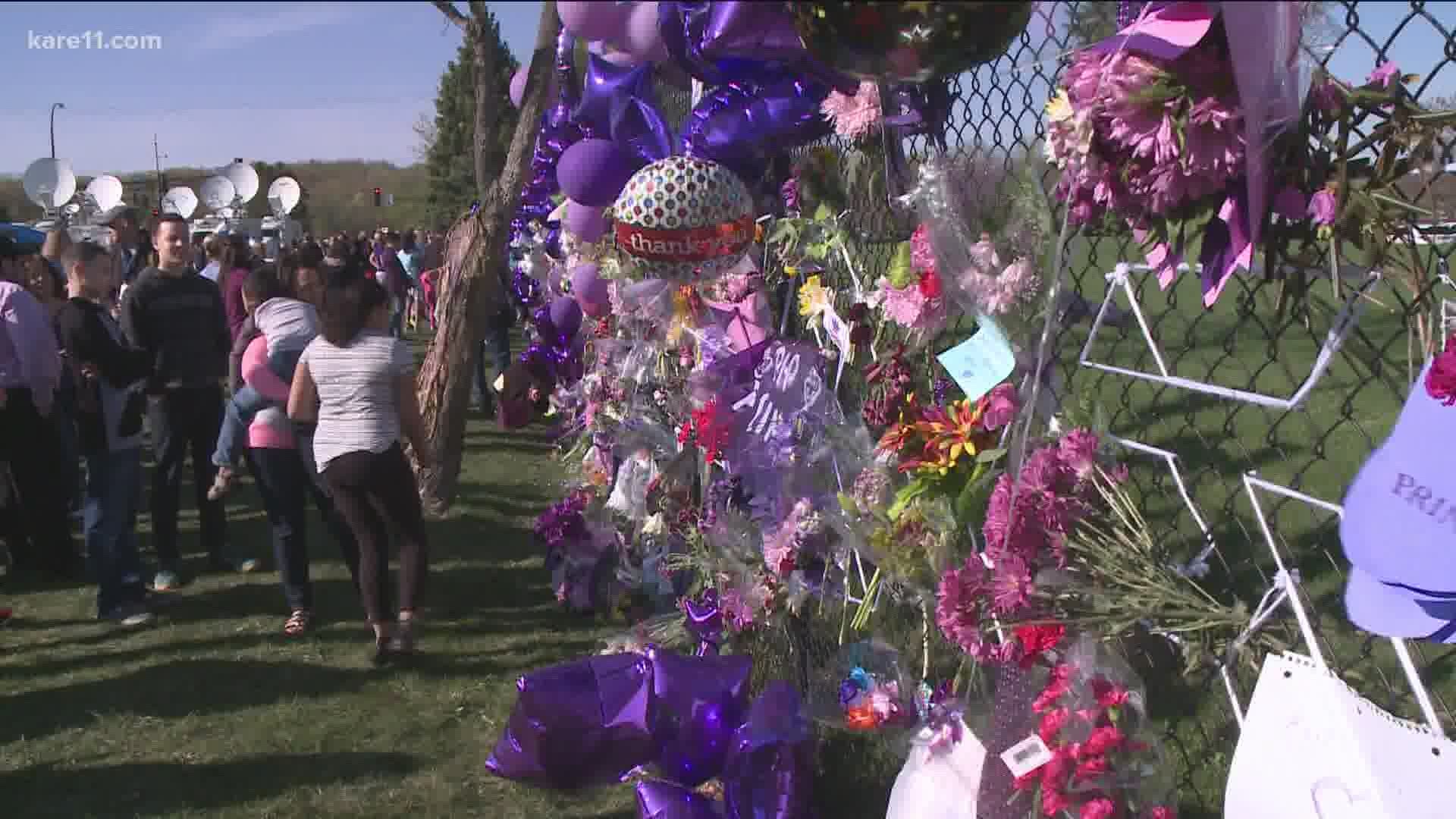 MINNEAPOLIS — The news came like a bolt of lightning. An emergency dispatch to an address in Chanhassen in response to a call about an unresponsive man.

The address was Paisley Park. The ambulance was coming for Prince Rogers Nelson. The man the music world knew as Prince was dead at the age of 57.

And the odds are you can remember where you were on April 21, 2016 when you heard the news. It was a day of rainbows and rain, sorrows and pain.

News crews rushed to the center of Prince's empire, where he lived and wrote and performed and recorded his music. Helicopters hovered overhead. Carver County Sheriffs Office deputies could be seen coming and going, conferring with the superstar's staff, friends and relatives.

The news was especially hard to believe because Prince was in the middle of his Piano and a Microphone Tour, which had begun three months earlier at Paisley Park. KARE reporter Boua Xiong and photographer Aethan Hart had both attended one of those shows, and said he was still dazzling as an artist even in that stripped-down format.

And just a month before he died, Prince made a surprise appearance at a James Brown tribute show at the Chanhassen Dinner Theater. The manager knew Prince would be there as an audience member, in a secluded part of the building, but was surprised to see him jump on stage and join the band on guitar for about a minute.

The first sign a trouble came about a week earlier. After an Atlanta concert, Prince’s flight back to Minneapolis made an emergency landing in the Quad Cities for what he later called the flu. The world would later learn that the pop icon had been rushed to a hospital after receiving an emergency antidote for an opioid overdose.

Back in Minnesota, Prince stopped by The Dakota jazz club to watch a concert and then hosted a dance party at Paisley Park where he reassured fans the Quad Cities incident should give them no worries.

"He said don't waste your prayers on me. Wait a couple days," one fan who attended the dance party told KARE at the time.

Another fan, Deborah Grant, told us that Prince had come out briefly to show off his new piano and guitar. He played a version of "Chopsticks" on his piano, and then spoke briefly to the crowd.

"He looked great, as he always did with those fabulous costumes," Grant recalled.  "You could tell in his voice, he sounded weak."

We eventually learned the Minnesota pop culture icon died of an accidental overdose of fentanyl from a counterfeit Vicodin pill. We learned that some doctors were aware of his painkiller addiction and were in the middle of putting together an emergency treatment plan when Prince passed away suddenly.

But on April 21, 2016 pretty much all we knew for sure was that an artistic genius had left without saying goodbye, and he had left way too soon.

"What can't you say about Prince?" Sy Huff told us, as he stood fighting back tears near the Prince star on the iconic exterior wall at First Avenue.

That day, as the weather changed back and forth from rain to sunshine, a rainbow appeared in the skies above the Twin Cities. Fans made their pilgrimages to Paisley Park and turned the chain link fence into a memorial filled with ribbons, balloons, guitars, teddy bears and homemade messages.

Some stood and look at the building and wept openly as reporters and photographers swirled amongst them. Among them were teenagers who were born after he last made the Billboard top 10. Others were fans who had seen Prince perform live dozens of times.

Still more people flocked to First Avenue, the downtown club that Prince had made famous 32 years earlier when it became the centerpiece of his 1984 movie, "Purple Rain."  By nightfall the crowd outside the club had grown to thousands, and they sang that tune and others in unison. Those who could get inside danced for hours to Prince's songs as his image was projected on a screen set up on stage.

That week in April of 2016 the tributes poured in for the lost icon.

Then Rep.-Peggy Flanagan performed "Purple Rain" in the Minnesota House Chamber. The future lieutenant governor was accompanied on keyboard by Rep. Mike Freiberg.

And Saturday Night Live turned its show into a Prince tribute. It featured all of Prince's SNL performances, the classic Prince parodies by Fred Armisen and Maya Rudolph, and footage of Prince performing at the after-show party for SNL's 40th anniversary show.

The film "Purple Rain" made him an international star at the age of 26, with an Oscar and Grammys in his name. But by then Prince had already cranked out six studio albums and was quickly becoming a pop icon.

His unique blend of rock and funk became known as "The Minneapolis Sound" in the 1980s. Prince wrote hits for other artists and nurtured other Minnesota musicians and bands.

But, as his star continued to rise, Prince kept his home for the most part in Minneapolis, building Paisley Park in Chanhassen.

"He was a Minnesota guy. He was proud of being from here. We all were," Bobby Z., the drummer for Prince's band "The Revolution" told The Current radio.

Prince Rodgers Nelson grew up in a musical family, spending part of his youth in north Minneapolis and part of it in south Minneapolis. The Central High School grad had some big hoop dreams, but as a teen he gravitated to the back room stage The Way Community Center on Plymouth Avenue.

Spike Moss, who ran the youth programs at The Way, said the teens there were learning about responsibility and the importance of lifting each other up for the common good. He remembers that Prince's equipment at the time was pretty bare bones.

"Prince didn’t even have a guitar case. He’d be walking down the street holding it by the neck in his hands!" Moss told KARE  reporter Adrienne Broaddus in 2016.

Signed by Warner Brothers at the age of 19, Prince was known for his dynamic performances, provocative mystique that pushed boundaries, for being reclusive with his personal life and epic battles with record labels.

His fight with Warner Brothers eventually led him to change his name to a symbol for several years so that he could produce music that wouldn't fall under that contract.

"When he signed that big contract Warner Brothers thought they owned him and could tell him what to do with his music," fellow Twin Cities musical artist JD Steele told KARE. "He didn’t like that."

In the days after his death we were flooded with vivid reminders of Prince’s unparalleled artistry -- his epic, rain-soaked halftime performance at the 2007 Super Bowl, and his show-stealing guitar solo at the Rock and Roll Hall of Fame tribute to George Harrison.

And we heard new stories. For instance, Prince's unlikely friendship with music blogger Andrea Swenson because he liked her napkin drawings of a Prince performance where no photography was allowed.

And Bobby Z. told The Current how the song "1999" came to be.  He said the band stayed at a hotel that advertised "Free HBO" on the marquee, and that night HBO was running a riveting documentary about the astrologer Nostradamus.

"The next morning the water cooler talk was, 'Did you see it?' Prince? He’d written a song! And that is the difference between Prince and mere mortals."

RELATED: Prince album recorded in 2010 to be released this summer