A south Minneapolis mom captures on video a bicyclist hitting a parked school bus with his bike lock. The same bicyclist broke several windows on the bus Friday. 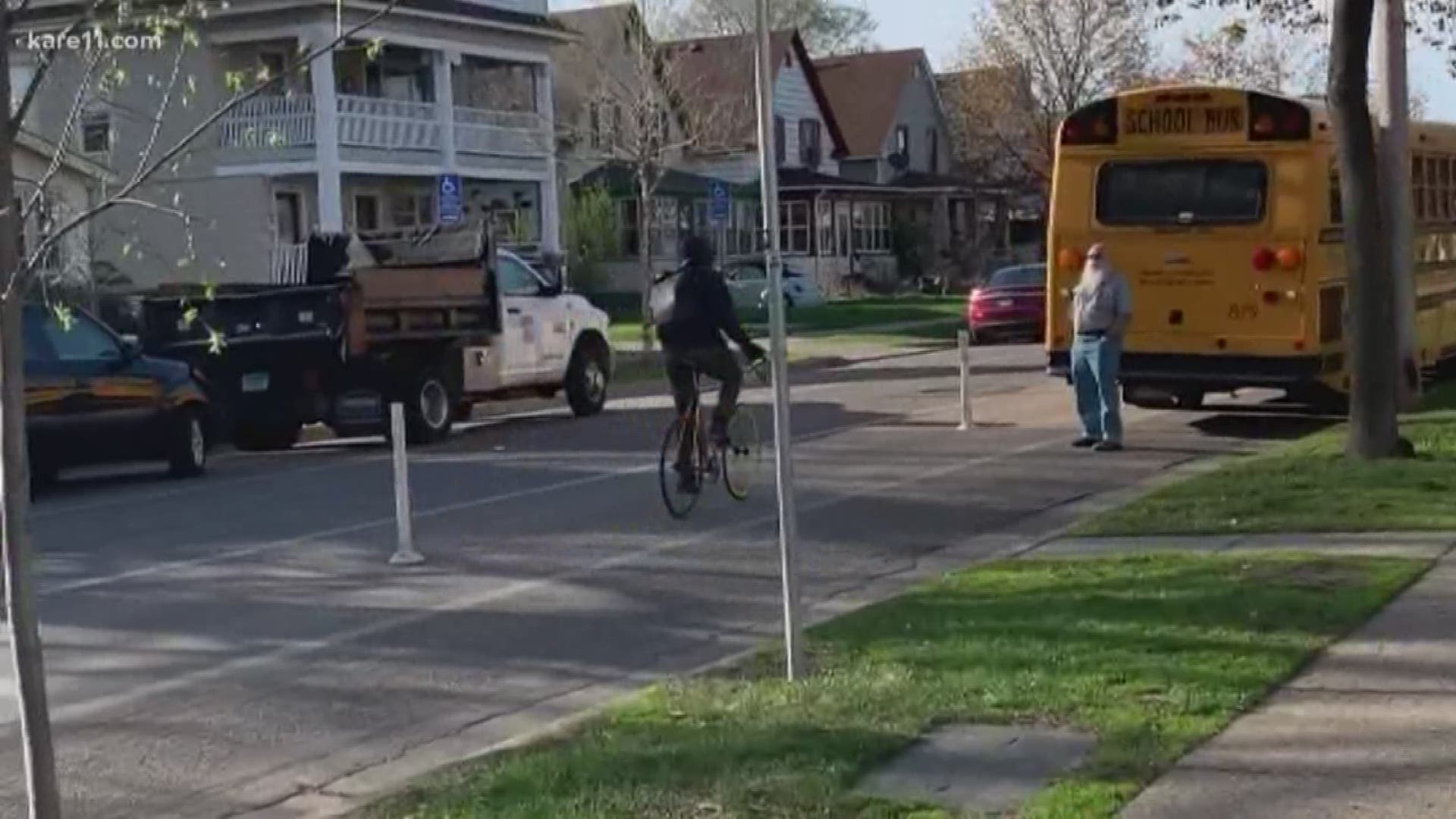 MINNEAPOLIS — Just after 8 a.m. Monday morning, a south Minneapolis mom who lives on Blaisdell Ave. was trying to hurry her son along.

His school bus was already parked outside, waiting for him.

Then the mom says she saw a bicyclist down the street stop and appear to pull something out of his backpack. The mom warned the bus driver and started recording on her iPhone.

Her video captured the bicyclist, wearing a dark hoodie, baseball cap, sunglasses and backpack, swing his U-lock style bike lock at the bus, smashing the rear blinker and rear-view mirror.

"That was him," yells the bus driver, Rich Olson.

"It's scary that someone out there – it's road rage on a bicycle," the mother told KARE 11 News, asking we don't report her name out of fear that the bicyclist could retaliate.

The bus was stopped on Blaisdell Avenue near West 32nd Street. That's a single-lane one-way street with a bike lane.

Olson is 71 years old and is adored by co-workers and children alike. They nicknamed him "Santa."

"Gets close to Christmas time, they start telling me everything they want for Christmas," Olson said.

Olson said if the children on Blaisdell are standing ready, he will put out the stop arm and flashing lights. But if the first child he's scheduled to pick up isn't out of the house yet, he's forced to pull into the bike lane to avoid stopping traffic for an extended period of time.

Monday morning's incident is more disturbing when you find out what happened Friday with the bus parked in the same spot.

"Bam, I heard a noise and next thing I know I turn around and the glass is coming in. Then he took out the mirror. Then he moved to this window then that window," Olson said.

He said the same bicyclist smashed the windshield, driver's side window, headlight and blinker.

"Awful, couldn't believe it, the damage to the bus. Then when I saw the inside of the bus, the bus driver's lucky he wasn't really hurt," she said.

Olson said the same bicyclist has been tormenting him for weeks. He rides a distinctive yellow bike with a partially-yellow front tire.

Olson hoped to deter the bicyclist on Monday by getting out of the bus and standing at the rear.

"Next thing I know, he reached around his back and pulled out his lock and starts wailing away at the bus again," Olson said. "I was really hoping he would just go on."

Olson is just thankful no kids were on the bus.

He said the incidents do not deter him from driving. He puts the children first.

"It's not so much being afraid. It's being right. Doing your job right, you know?" Olson said.

Minnesota law states that a bus can enter a bike lane to pick up or drop off a person, provided flashing red signals are activated and the stop-signal arm is extended.