Border Protest: Clergy among those to stand trial after arrest

Last December, those arrested were with others at the border in San Diego to bring attention to what they believe were injustices towards migrant families. 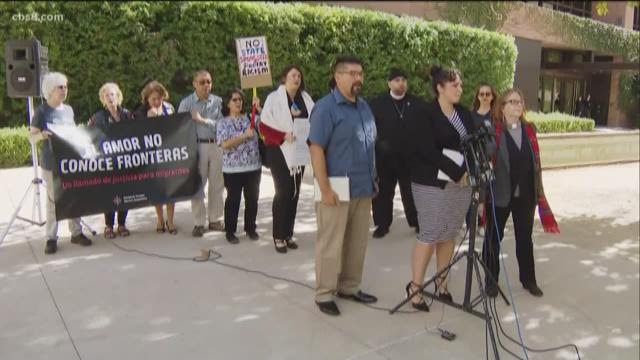 SAN DIEGO — Demonstrators on Monday used their voices to show support outside of the federal courthouse for a group of clergy, veterans, and others arrested at the U.S., Mexico border.

On Monday, four of those arrested were set to stand trial, and two of them are faith leaders.

Last December, those arrested were with hundreds of others at the border in San Diego to bring attention to what they believe were injustices towards migrant families at the border.

It has been reported that Border Patrol agents asked the demonstrators to move away from the wall, but witnesses say after clergy members tried to move forward with ceremonial blessings near the wall, agents arrested them. A total of 32 individuals were taken into custody.

The issue of migrants arriving at the U.S., Mexico border seems to have faded from the headlines in recent months, but the issue remains a deeply devise issue.

While supporters have called their treatment deplorable, on the other side, many Americans have sided with law enforcement and their right to enforce U.S. laws and policies – especially against those who have come to the country undocumented.

“Migrants are receiving due process and protection while the United States is restoring integrity to our immigration system,” said Mark Morgan, acting commissioner of U.S. Customs and Border Protection.

It remains unclear how the outcome of the trial will affect future demonstrations.