A deportation stopped: A St. Paul family now waits to find out what's next

A St. Paul man was to be deported late last week, but with a young son who is a U.S. citizen seriously ill, his family waits for a possible reprieve. 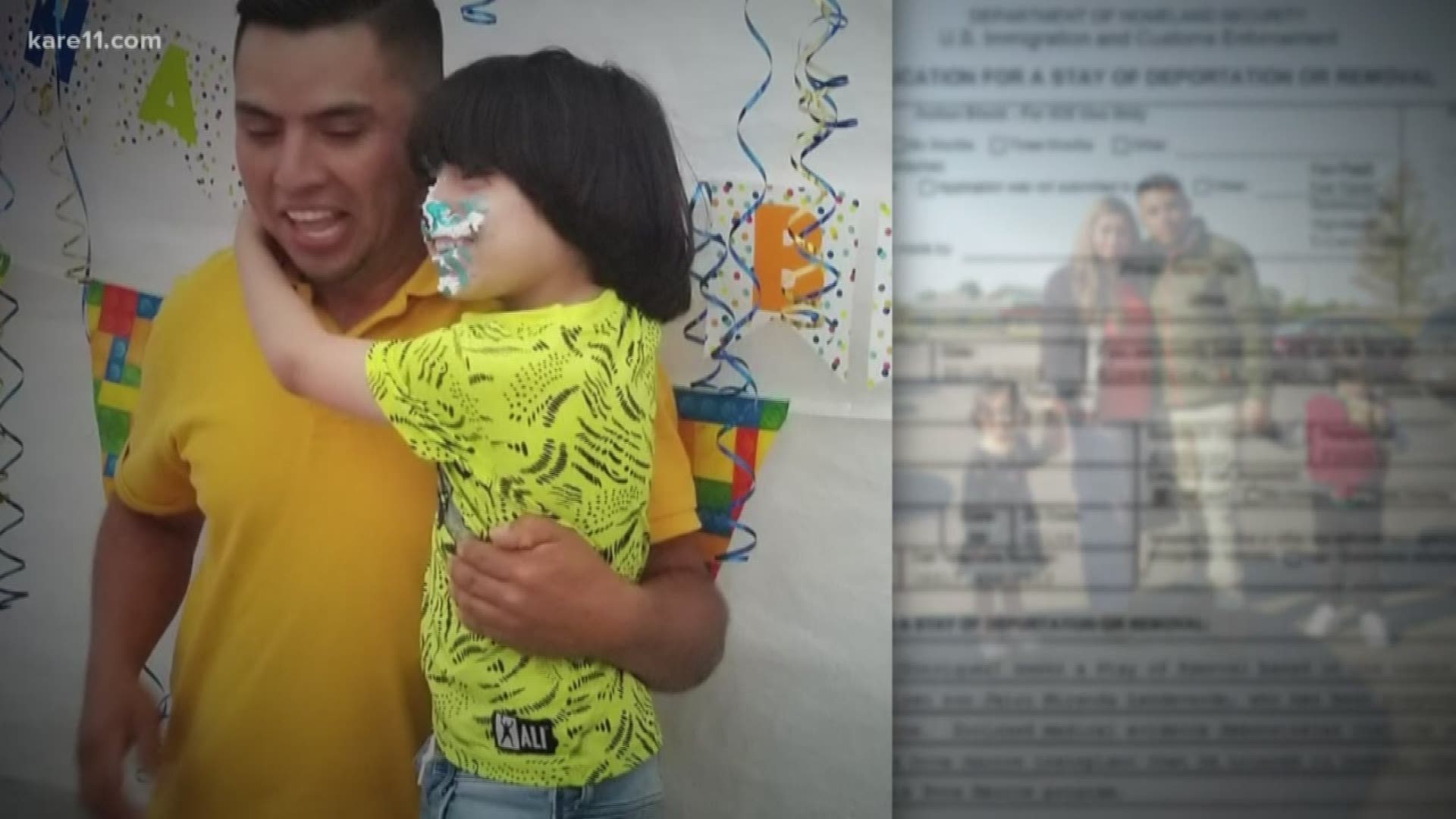 ST PAUL, Minn. — Immigration is an issue in this country.

And every politician from every party has their own idea on what to do about it.

And in the debate, often times what gets lost, is the individual stories.

This individual story is about a family in St. Paul.

Mirna came to this country alone in 2006.

“There's times where you are just concerned about the daily survival,” she said referring to her home country.

She fled El Salvador, she said, and crossed into the U.S. without papers.

Saying she wanted to come here for work, and that work was hard to find there.

I asked her if she was happy to come to America.

“Yes, I was happy to come here. I knew that here I'd have a better life,” Mirna said.

She married Armando Miranda Enriquez; he came without papers from Honduras, for the same reasons: Work and a better life.

Credit: KARE
A photo of Armando Miranda Enriquez (second from right) and his wife, Mirna (second from left) and the two children, Jessy (left) and Jairo (right).

“The big goal for the family is for the younger children to be able to study,” Mirna said.

The children, both born in St. Paul, are U.S. Citizens.

Shortly after their oldest child, Jairo, was born they learned he was very sick.

Jairo has a genetic disorder that seriously affects his immune system and the only hope for a cure, according to his care team at the University of Minnesota, is a bone marrow transplant in the very immediate future.

Credit: KARE
A photo of Armando Miranda Enriquez and his son Jairo.

With his next medical appointment to make the transplant plan set for March, the family faced something it didn't see coming last month.

Immigration officials came to their home one morning several weeks ago, and took Armando into custody, as he is undocumented and was ordered out of this country over a decade ago, but then came back.

Late week, he was set to be deported to Honduras, his home country.

The night before he was to leave, Danielle Robinson Briand, an immigration lawyer, filed a stay of deportation for Armando - and in 43 pages explained to the federal government that it was her, and the family's position, that if Armando were deported this family will face great hardship - most importantly, they cited Jairo's illness.

Credit: KARE
A photo of Armando Miranda Enriquez and his son Jairo.

She explained that he works full time to pay for Jairo's care, and to support his family.

He pays his taxes.

He owns a successful business in St. Paul.

He is a devout Christian member of his St. Paul church.

Besides the immigration violation, he has no criminal history and has never been arrested in all his time in America.

But even with all of that, for him to stay his attorney said, would basically be a favor granted to him and his family from ICE.

On background, an ICE official with knowledge of Armando's case told me the documents will have to be reviewed - but that late last week his deportation was temporarily stopped.

Armando may get that temporary permission to come back - but even if he does, it's just temporary.

The best he can hope for is a one-year stay, that would then have to be re-considered next year.