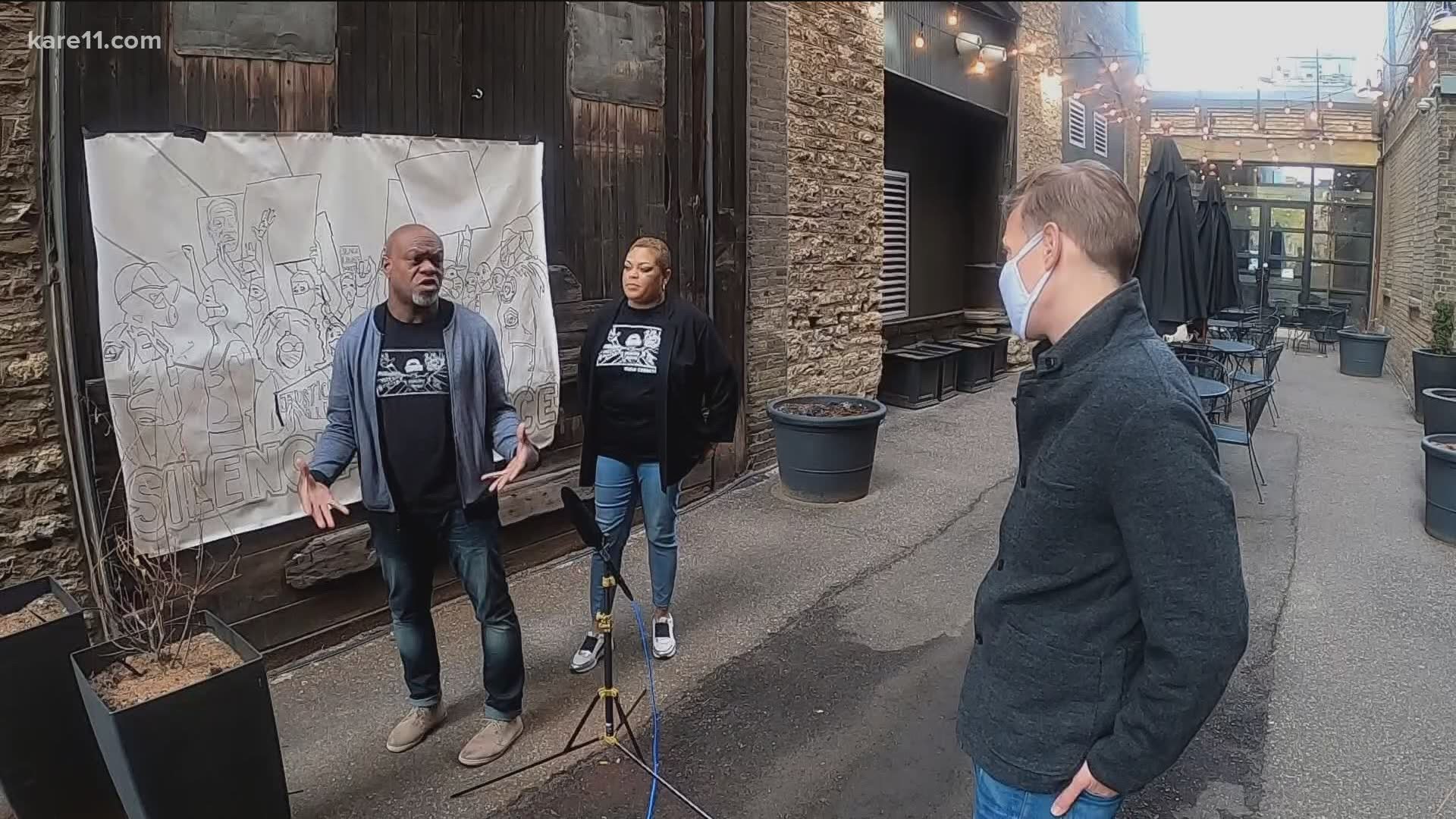 MINNEAPOLIS — For some, the sudden police killing of Daunte Wright in the midst of the trial of Derek Chauvin, was mobilizing. Protests and vigils in Brooklyn Center a testament to that.

For others, the events were paralyzing.

"I took off of work Monday through Wednesday because for the first time in my 52 years... this was the first time that I couldn't move," said Sean Phillips, an artist and poet from Minneapolis. "I wanted to, but I just couldn't move because I think, for me, the weight got to be too much."

In time, Phillips says he found the strength in the same way he always does, by lifting a brush.

"People need to get this thing, this energy, outside of them," Phillips said. "Because, if not, we know it can become destructive."

Christopher Aaron Deanes says art is has been his outlet as well.

"It's hard to speak to all this when the feelings and the harm is real and relevant in your body, in your mind, in your heart and your soul." Christopher Aaron Deanes said.

Christopher Allen Deanes, and his wife Cara Deanes, are directors of the ROHO Collective, a Twin Cities Non-Profit that has been helping artists of color tap into that creative outlet when words aren't enough. ROHO Collective works to promote the work through new partnerships and platforms.

This weekend, Martin Patrick 3 in the North Loop of Minneapolis, will feature several artists both inside and out. The event, will run from 12:30-6pm, and will also feature art as therapy.

"We'll be having live art, including painting, sculpting and tie-dye," Christopher Aaron Deanes said. "We'll also have a DJ as well as two public art projects."

The public art is a chance for everyone to find a creative outlet. Therapists with Creative Kuponya will also be on hand.

"We've been planning this event as just kind of a respite during the trial," Cara Deanes said. "And then the unfortunate incident, the killing of Daunte Wright just kind of confirms the work. It adds to the work. It's great to protest, it's great to fight but we have to also recharge ourselves and we also have to take some to really process that and heal from those wounds and those traumas that we feel."

The public will able to help that process by finishing a large sketch created by Christopher Aaron Deanes, titled "White Silence = Violence".

"People can add color and also leave messages on it," he said. "We left room, even in some of the protest banners. It's going to give them an opportunity to work together, talk through it with one another as we're doing the work."

Sean Phillips says he'll be there painting, and he'd love to see others come and pick up a brush as well.

"That would be a fabulous thing to see," Phillips said. "I don't expect people to come out with all the answers. Just come with your energy. Come say hello. Come cry a little if you need to or be ticked off, that's okay, cuss somebody out, that's energy too. I'd rather you do that than do nothing. Even if it's just a brush stroke. This is what I believe in and we need to figure this out together because that's the only way out."