The beach is known to be a "clothing-optional" kind of place. 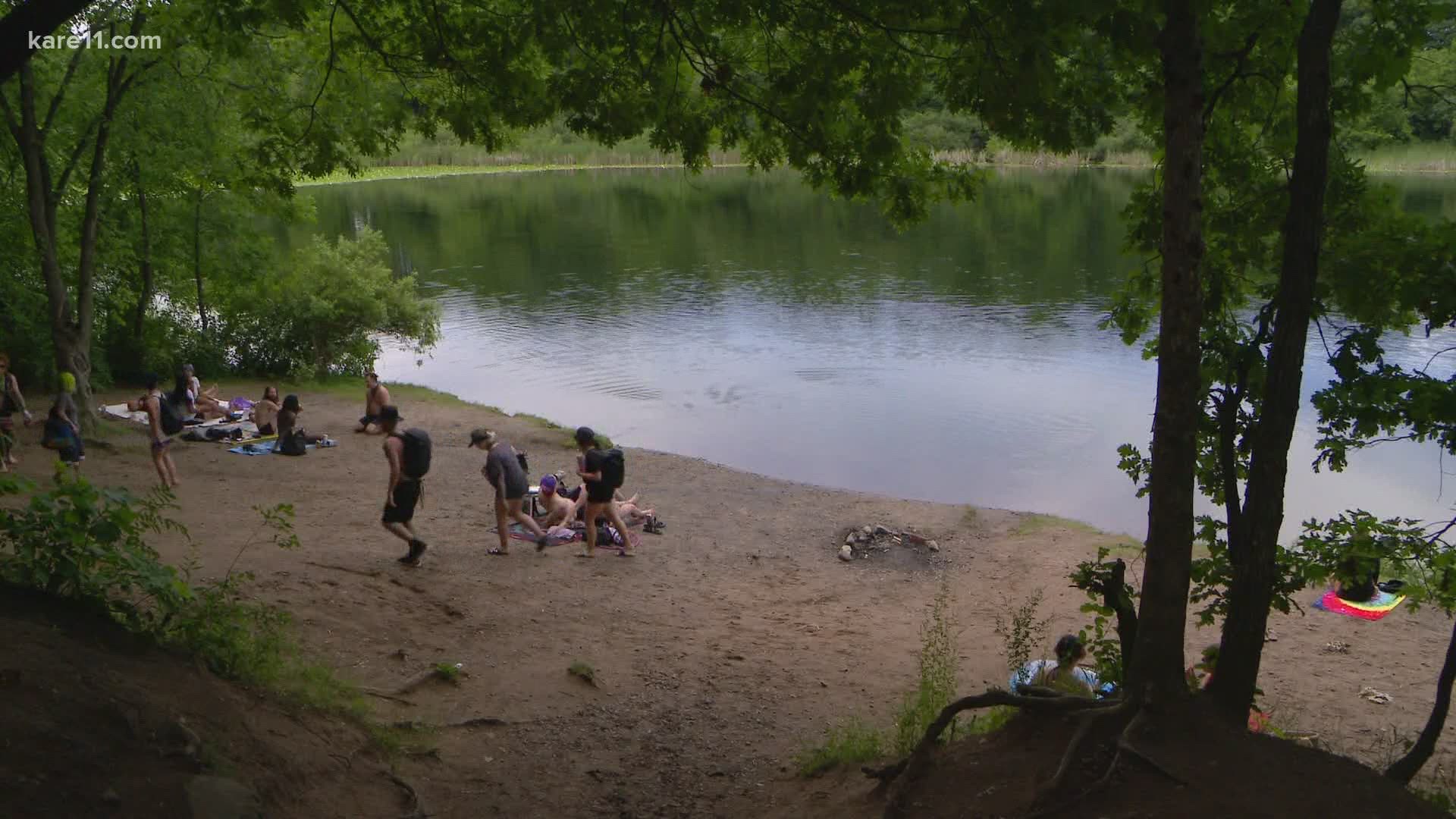 GOLDEN VALLEY, Minn. — An interaction was caught on video over the weekend. Cellphone video shows Golden Valley police officers collecting information from Kristian Calbert and her friends, who are hanging out at a beach.

The beach, which is located in Golden Valley, is widely understood as a "free-from-clothing" kind of place. Calbert described it as a safe space where people who want clothes to be optional can relax, without any judgement from other beachgoers.

"[We were] just chilling, enjoying a day of not doing community work, trying to relax at the beach," she said. "We saw a drone go up. We didn't think anything of it because everyone has those now. Maybe ten minutes later, we hear, 'we think police are coming.'"

On the cellphone video, Golden Valley officers can be seen talking to Calbert and her friends while others at the beach question what they are being cited for. Officers can be heard saying that it's illegal, to be topless.

"We're like 'no,' we have our tops on," Calbert said. "So what illegal activity do you have us doing, she said we have it on video. One of the male cops pointed up and said, 'Yeah, that drone that was flying around--that was us.'"

Whoever is taking the video can be heard saying, "They were wearing tops!"

The officer replies, "They weren't earlier...when the drone was flying over there, we watched all of you."

Calbert said the drone made her feel uncomfortable.

"I don't like that," she said. "If you come up to me right now and tell me 40 minutes ago, I was doing something but you won't provide any proof and that's enough to get me in trouble, I don't think that's okay."

Calbert said because the beach was in Golden Valley and it lacked any signage, she didn't know it was a part of the Minneapolis Park system. Right now, as it stands, MPRB's ordinance reads, "No person ten [10] years of age or older shall intentionally expose his or her own genitals, pubic area, buttocks or female breast below the top of the areola..."

RELATED: Minneapolis park board will vote to repeal nudity ordinance

"It's ridiculous when I turn around and there's a gentleman who has boobs that are as big as, or bigger than mine," Calbert said. "And he can keep his shirt off and we're doing the same thing, sitting in the sun. I'm like you say it's a sexual organ but it's not. We're not sexualizing it."

Some did express, though, that when it comes to children at the parks, it might be a conversation a guardian might want to have.

"It's up to parents and kids to have conversations about that," a woman said in a previous KARE 11 interview from Tuesday. "That's how we start to break down archaic thinking."

Calbert said she's hopeful that the park board would reconsider its ordinance. The MPRB announced it will be voting Wednesday on the ordinance--but it is not a "one vote and done deal." Tonight's vote will be one of three, with the final vote anticipated in August.

RELATED: Minneapolis parks ramp up lifeguard presence at some beaches

UPDATE: The City of Golden Valley issued this statement in response:

On the evening of Friday, July 10, the Golden Valley Police Department (GVPD) and the Minneapolis Park and Recreation Board (MPRB) Police Department responded to complaints of potentially unsafe conditions and illegal activity at an unauthorized beach in Theodore Wirth Park.

The City of Golden Valley received feedback and criticism about its actions, including the decision to take enforcement action, officer interactions with the beachgoers, and the use of drone surveillance. The City appreciates the feedback and wants to continue the dialogue by responding to some of the questions received.

A unique relationship exists between MPRB and the City of Golden Valley. Theodore Wirth Park is owned and operated by the MPRB, but 60 percent of the park resides within Golden Valley’s municipal boundaries. The City and the MPRB work together to patrol the park and keep visitors safe.

Why were officers called to the beach in the first place?

For decades, police response to the unauthorized beach has been based on complaints by local residents and park patrons. The beach has been the location of sexual assaults and other sexual activities, a substance-related drowning, an accident resulting in paralysis, and drunk driving and narcotics arrests. Also, recreational fires in various areas along the beach regularly pose risk to the surrounding parkland and neighboring businesses and homes. In the last year police have written more than 40 citations at this location for violations including indecent exposure, consuming alcoholic beverages, and after-hours park usage. The goal is to keep the beach area safe for all park users.

Regarding this latest incident, police were responding to complaints about illegal beach behavior and encountered illegal consumption of alcohol and nudity.

Complaints said officers targeted individuals of color. What does the City say about that?

Why issue citations for low level violations or non-violent crimes in the first place?

Although the officers collected information from several individuals for various infractions, no citations have been issued at this time. Over the past several months, the City has received many complaints from Golden Valley residents and park patrons and has issued many warnings and citations to beachgoers.

How does the City use drones?

The police use drones to promote public safety and collect evidence, especially in difficult to access areas, and as a de-escalation tool. Examples include surveillance during gatherings on public property, such as community festivals, and fire department operations. Recently, the City started using drones during the COVID-19 pandemic to avoid having unnecessary face-to-face interactions between members of the public and officers.

It seems inappropriate to allow officers to collect footage of nudity.

Drone footage is accessible only to very few staff within the department and is only used for documentation, evidence collection, and prosecution if needed. Police staff are trained in data privacy and maintaining confidentiality. By law, people in public spaces have no expectation of privacy from being recorded by security devices (MN State Statute 626.19, Use of Unmanned Aerial Vehicles).

What happens to the data collected from a drone?

The City deletes drone data as soon as possible and does not retain it longer than seven days, unless it is part of an active criminal investigation. The City welcomes feedback from the public on its drone policy, which can be found at www.goldenvalleymn.gov/police/gvpd-window/.

The City acknowledges the feelings of all involved in the July 10 situation and those who viewed the video footage. The City appreciates that context matters and that there is a heightened awareness around policing behavior. GVPD officers strive to provide fair and unbiased services and take pride in maintaining positive relationships with members of the community. Their priority is to ensure that citizens’ complaints are answered and that parks are safe so all people feel welcomed.

The City strongly condemns racism and discrimination. The City conducts a variety of trainings, and leadership regularly reviews police interactions with members of the public, including body cam and dash cam footage, to ensure officers treat individuals fairly and equitably.

As Golden Valley works to make its community a welcoming and respectful place for all, the City continually tries to balance individual freedoms and rights with safety as well quality of life issues for both residents and visitors.