"Operation: 23 to Zero" is hosting the event "Boots for the 20" at the Minnesota State Capitol this week to raise awareness of military and veteran suicides. 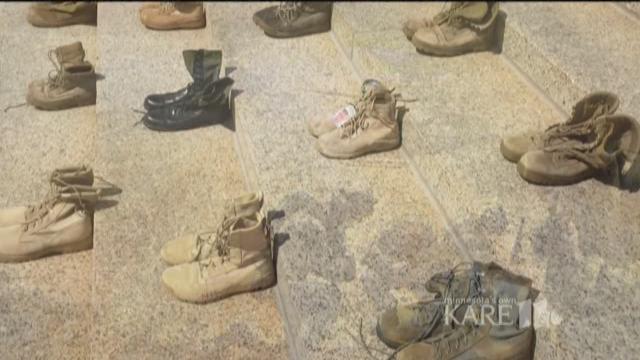 ST. PAUL, Minn. - Every day, about 20 veterans commit suicide in the United States, according to the Department of Veterans Affairs.

A Twin Cities-based nonprofit is putting that number into perspective in hopes of starting a larger conversation around military suicides.

"Operation: 23 to Zero" is hosting the event "Boots for the 20" at the Minnesota State Capitol this week. Every day, the group places 20 more boots on the steps of the Capitol building to represent the lives lost to suicide.

"There's a lot of stories to these boots," said David Peters, director of Operation: 23 to Zero.

Peters, who served 12 years with the U.S. Marine Corps, pointed to a pair of boots that belonged to Joel Costa. Costa, a Minnesota National Guard member, committed suicide in February.

"Yesterday we had a family come out and place their son's boots," he said.

This is the group's third year displaying boots at the State Capitol.

"If you look at the boots here... none are the same. They have blood, sweat, tears, oil, gas, mud on them. They have character," said Captain Michael Langr with the Iowa National Guard.

"I'm a 23-year veteran and this is something that hits close to me. I've lost friends and family members, fellow soldiers, to suicide... it's not a story that's told enough," Langr said.

By Friday, there will be 100 pairs of boots on display.

Langr added, "They're our brothers and sisters and it shouldn't happen."

For veterans in need of help, Operation: 23 to Zero has a list of resources here.

Editor's Note: This story was originally published in April 2017.