Phil Lawrence set up his doughnut trailer in Brooklyn Park Fleet Farm's parking lot a few days ago. Then, he went viral on Facebook. 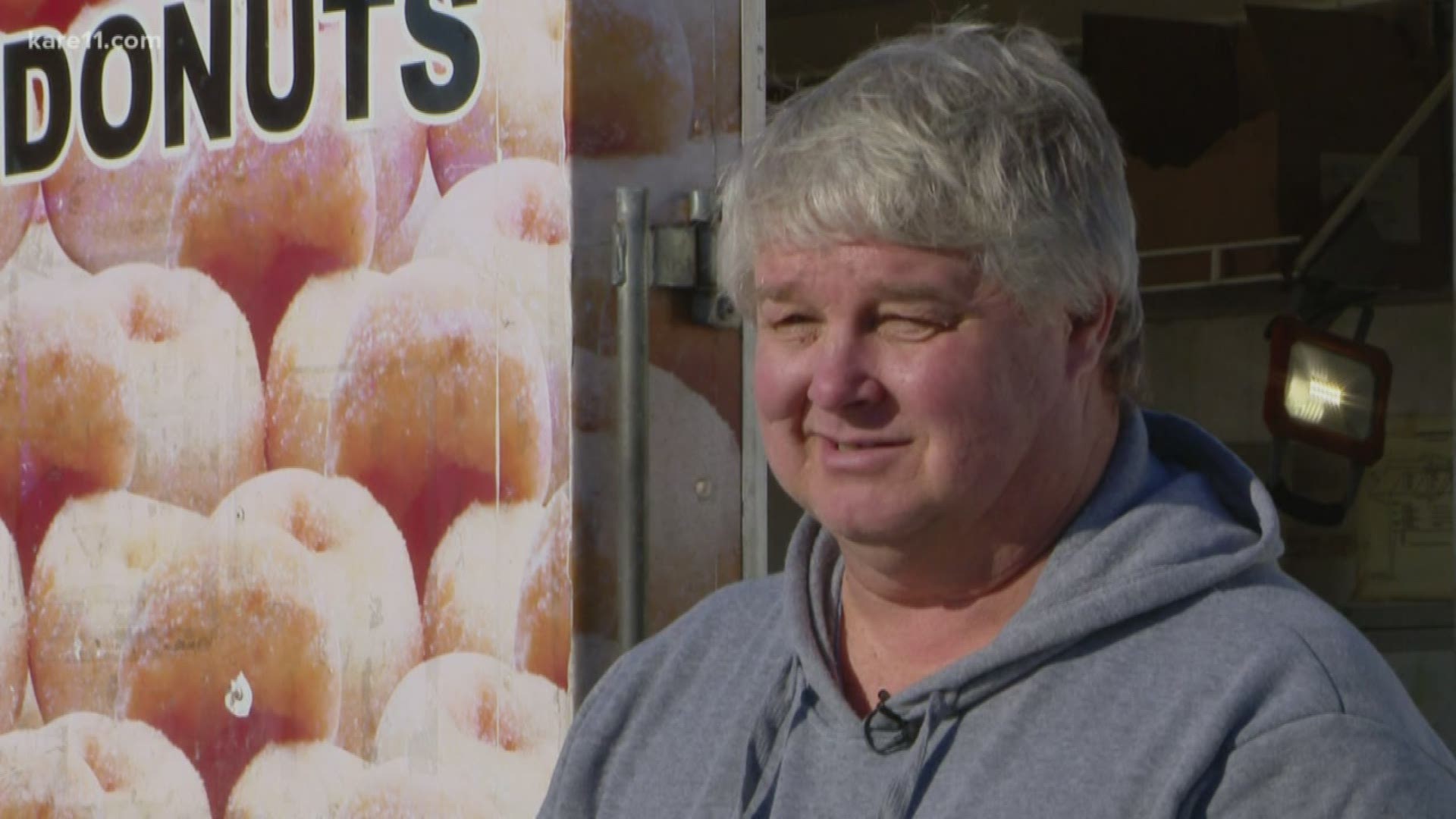 BROOKLYN PARK, Minn. — You usually find yourself at a Fleet Farm when you're looking for things like power tools or gardening supplies. However, at the Brooklyn Park Fleet Farm, people were looking for something a little sweeter.

"This is my second time," a woman said, holding a tall paper bag overflowing with mini doughnuts. "I try not to make it an every day occurrence."

Fleet Farms aren't really known for sugar fixes. However, the Brooklyn Park location recently has become a hot spot for those looking to satisfy a sweet tooth, all thanks to a Facebook group hooked on Phil Lawrence's Mini Donuts.

"I go all over the state," Lawrence said, filling a plastic bucket with his mini doughnuts, fresh from the fryer. "I'm at Martin County down at the Iowa border I'm up in Hibbing at the St. Louis County Fair. I see the same people all the time."

For 15 years, Lawrence has been slinging tiny hoops of joy.

"I don't eat doughnuts," Lawrence said with a chuckle. "I try them once in a while to make sure I'm doing them right."

His little trailer that sells five dollar bags and 16 dollar buckets has kept his business strong.

"I make a lot of money-- I don't deny it," Lawrence admitted. "I can pay my bills and I can give everybody their cuts. But the love..."

Lawrence trailed off, thinking about how the last few days have been for him. He's referring to the love that only online communities can offer. A specific, viral kind of love. It's the kind of affection he hasn't seen before in 15 years of his doughnut business.

"It's one thing to make money, it's another thing to feel an overwhelming compassion towards something you do all the time," he said.

Ever since conversations began on the Facebook page called 'Brooklyn Park, MN Bulletin Board,' the page has been overflowing with doughnut talk. People have been posting pictures of their doughnut haul. Sometimes they posted selfies or pictures with Lawrence himself. The Brooklyn Park police and fire department folks got in on the love too, vouching for the sweetness and awesomeness of his doughnuts.

"It's been a much needed change because literally the page can get really negative," one woman said as she was waiting for her bag of doughnuts. She was referring to the community Facebook page. "It can be neutral, but everybody can get really negative. People are grateful you did this and gave them something to be happy about!" She shouted into the window so Lawrence could hear.

If happiness can come in a bag, warm and coated in cinnamon sugar, you can find them in Lawrence's trailer, parked in the Fleet Farm parking lot.

"The best I can do is give them the most doughnuts that I can," he said, piling the small, golden rings high into a bucket for a customer. "Hot and fresh."

Phil said as much as he loves his Mini Donuts, his joy actually comes from a community showing up hungry for a good, positive story.

"Brooklyn Park, I won't ever forget them," Lawrence said.