Former Gov. Tim Pawlenty shares thoughts on Capitol riots, and the future of the GOP

Pawlenty said he was "disgusted and angry" watching the insurrection unfold on Wednesday in Washington. 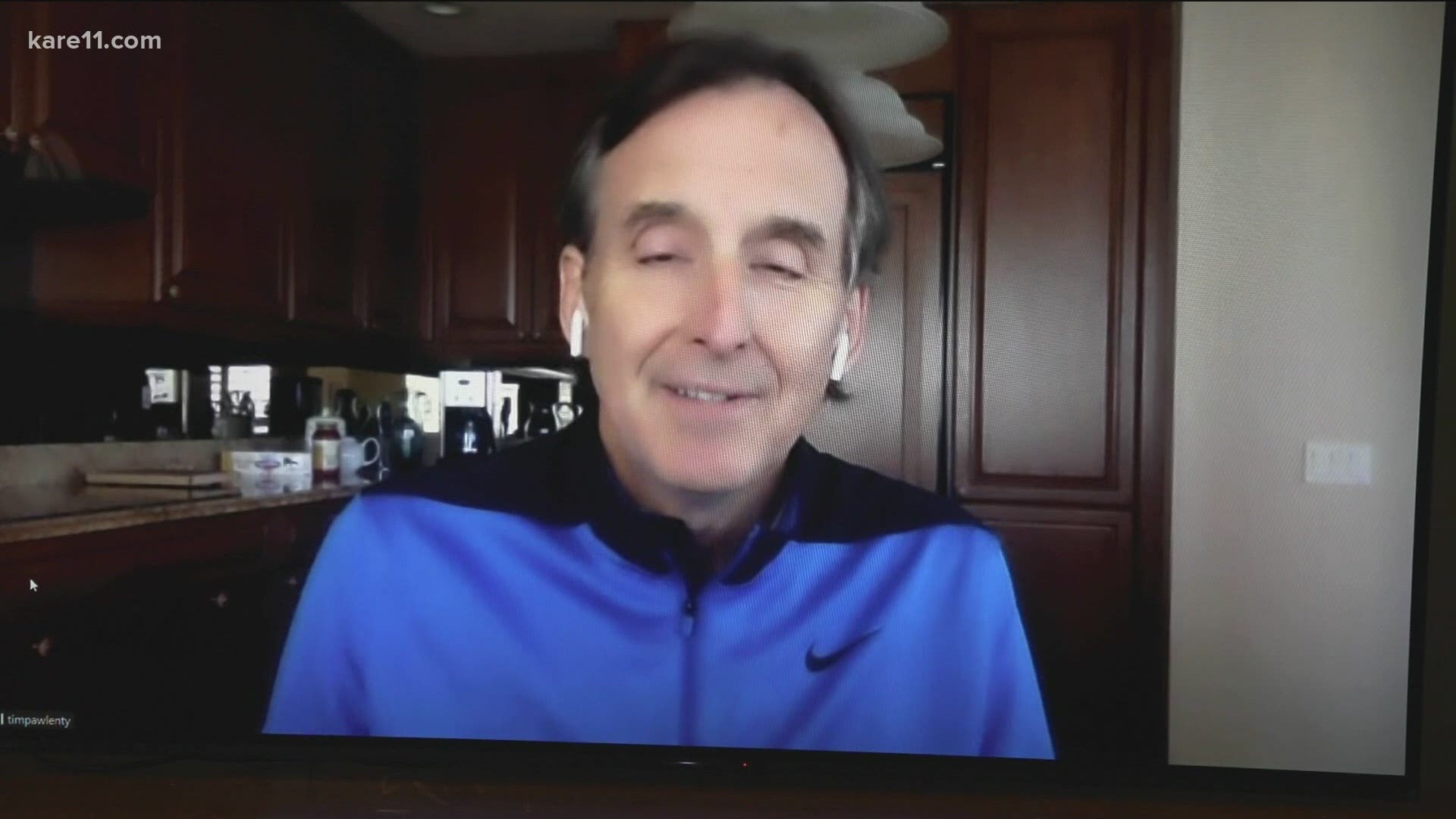 Like many of us, former Republican Minnesota Gov. Tim Pawlenty was a witness from afar to what happened in Washington, DC on Wednesday.

"In watching the mayhem and violence that broke out inside of our Capitol earlier this week, I was initially stunned and then I was disgusted and angry as I'm sure most of your viewers were and most of America was," Pawlenty said in an interview with KARE 11's Jana Shortal.

"Regardless of political party we have to be able as a people, a society, neighbors, community to agree on certain basic rules, and one of those basic rules is you don't get to use terror or violence to advance political agendas. That's domestic terrorism," Pawlenty said.

Shortal asked the two-term GOP governor and onetime presidential candidate if he felt that what happened on Wednesday afternoon hurt the Republican party.

"Absolutely," Pawlenty said. "In the recent election, of course, Republicans lost the White House and both houses of Congress and now have witnessed the President attempt to incite an insurrection. And if that isn't rock bottom, I don't know what is.

Pawlenty was also asked his opinion on the state of the Republican party right now.

"I think the Republican Party elevator has landed in the basement with a big thud," he said. "And now we are going to have to go thru a process of charting a better course for the future."

What that course looks like, would differ depending on what Republican you speak to, but Pawlenty thinks Minnesota's Republicans should be thinking of change.

"I was last Republican to win statewide (in Minnesota), and that was 2006, so nearly 15 years ago. And when you haven't won a statewide election in 15 years I would say that's pretty tough shape," Pawlenty said. "Minnesota has the longest unbroken streak of voting for Democrat for President of any state in nation. And so Republicans have to look at that and say more of the same isn't going to work if you want to win statewide in Minnesota. It's different in pockets and districts, but statewide if you want to have people from our party elected governor or (to the) U.S. Senate, we are going have to be better and earn support of more people and that hasn't happened."

And while he was last to win for that party statewide, he couldn't get out of the Republican primary when he ran again in 2018, losing to Hennepin County Commissioner Jeff Johnson. So things have changed, if we just look at that vote, in terms of which Republicans that Republicans vote for.

But Pawlenty was the last Republican governor here, that is true, and he was one and is one who does not find favor for the current outgoing President.

"You can't have a party that is led by people who don't tell the truth and this president among other things hasn't told the American people the truth," Pawlenty said. "And one example of that is to perpetuate the notion that the election was stolen when no court in this land, no judge, including Trump judges, said that's not the case and try to use that to foment an insurrection that is a line way beyond what any of us should tolerate."

So in his opinion, what is next for this country, when it comes to deep divisions both in the chambers of Congress, the chambers of Minnesota, and in the people who cast votes?

"We have to realize we live in a country where people with very different views if we are just going to say it's my way or highway we are gonna head in the ditch," Pawlenty said. "We have to find a way to reward discussion and common ground at least to a degree so we don't self destruct."