Have you ever wanted to be a Disney princess? Well, in Hugo, you can just show up and this deer might let you pet her. That's if you can find her. 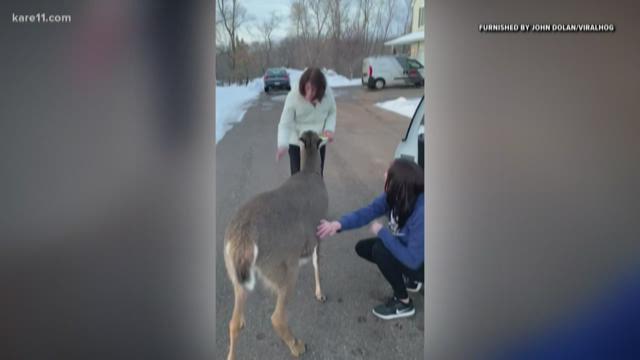 A family in the North Metro is getting a lot of attention tonight thanks to a video they captured of a deer that's a bit more than friendly.

The situation is definitely reminiscent of those Disney movies. Disney movies in which princesses are dancing and hanging out with wildlife. The birds and mice brought Cinderella her hair ribbons and shoes. An owl danced with Sleeping Beauty in the forest. In the fantastical world of Disney, anything's possible right?

Well, in the fantastical world of Hugo, that's possible too. John Dolan got a chance to be a real-life-Disney-princess on Saturday when a deer approached his son, who was getting mail.

"My son was walking to get mail at the mailbox and I noticed the doe approaching my son and it was getting really close," Dolan said. "I thought I've got to get this on camera and started rolling."

To be honest, John Dolan is probably the furthest thing away from a Disney Princess.

"Well, I moved to Iowa to deer hunt, I'm a little obsessed with deer hunting," Dolan said. However, he said his sentiment towards deer is one of love and adoration.

"I respect nature and deer are one of my favorite animals," he said.

So on Saturday when a doe wasn't shy about her interest towards him, his son and his son's girlfriend, Dolan said it made for quite an unforgettable moment.

"It was really unbelievable, as you can tell from my laugh--which was a bit embarrassing," he said. "People are getting a kick out of it, she definitely seemed to like me as you can see from the video. She nuzzled me a couple of times and I think she was probably looking for food."

If you watch the video until the end, it becomes obvious that she probably was looking for food. When John's son's girlfriend Sadie showed up with her car, she said the deer bee lined for some fries under her seat.

"It was two french fries," Sadie Lalles said. "I would never feed a deer McDonalds, just to let everyone know that. But it was just first instinct."

She said touching and petting the deer was surreal.

"It was like velvet--soft and squishy and not what I thought she would feel like," Lalles said. "The only other deer I've pet has been the one on my wall unfortunately. So it didn't feel the same. She was perfect, she was healthy, nothing strange about her behavior. I think she had been fed by humans."

Lalles said she found it funny that Dolan hadn't hunted and killed any deer in the past two years.

"He didn't get a deer this year, I was teasing him that a deer just walked up to him," she said. "He said he could have but he's a hunter. I thought it was perfect."

Maybe, the deer was just saying 'thank you.'

KARE 11 has reached out to the MN Department of Natural Resources to ask about the deer. They said they do not recommend the artificial feeding of deer--and although it is not illegal to feed a deer, there might be local ordinances prohibiting it. They added that possessing wildlife is definitely illegal and that if you were to run into a friendly deer, you are encouraged to haze it or scare it away.

This way, the deer aren't motivated to come back for more food.