Get a Girl A Kidney: Shedding a light on living organ donation

Christina Garner has been on the transplant list for nearly three years. She learned she was entering kidney failure on her father’s birthday. 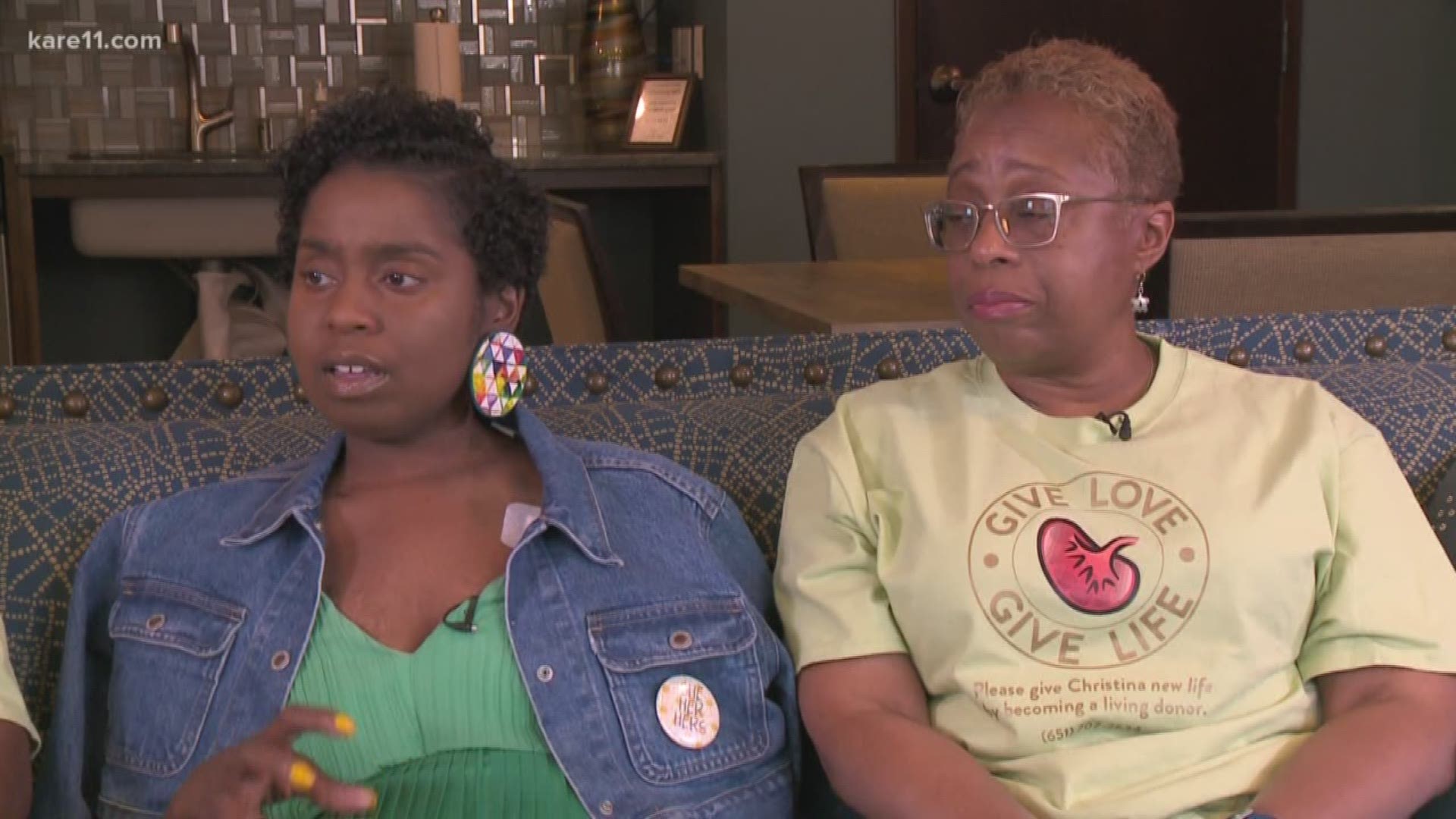 ST PAUL, Minn. — Three-thousand. That's how many new patients are added to the kidney waiting list each month, according to the National Kidney Foundation.

One St. Paul family is waiting for a gift that will change their lives, again. Christina Garner is 33-years-old and needs a second kidney transplant. If a registered organ donor dies, Christina doesn't qualify for one of their kidneys. Her only option for a chance of a normal life is getting a living donor.

“I enjoy the aspect of being able to be a survivor, but I want to thrive,” she said. “In the past week my biggest fear is possibly dying before I accomplish some of the many things I have on my list. In the fall 2000 I was diagnosed with Focal Segmental Glomerulosclerosis better known as (FSGS), which affects how the kidneys filter out impurities in the body and causes scarring on the kidney.”

Christina Garner and her parents have been searching for a donor.  Her mother issued a plea on Facebook.

“Every day she struggles just to get out of bed. She is a loving sister, daughter and friend. She is a hard worker. Unfortunately, her body is not being very kind to her right now. She desperately needs a living donor to give her a kidney. If I could give her a kidney I would. I have been tested at 3 different kidney centers and have been turned down, Coral Garner wrote. “If I could give her my life in exchange for mine I would. That’s how much I love her. We are looking for a type 0 blood type but if you are willing to participate in a paired exchange that will help us as well.”

Her father, Carlton Garner, wears a shirt with the following message: Please give Christina new life by becoming a living donor. By sharing your spare, you are giving one of the greatest gifts of all, Life.

Christina Garner has been on the transplant list for nearly three years. She learned she was entering kidney failure on her father’s birthday.

She is not alone. According to the Department of Health and Human Services, African Americans make up the largest group of minorities in need of an organ transplant.

And, in many cases it is hard to get a transplant - let alone twice.

Christina is on dialysis 12 hours a day and still works full time at the St. Paul Foundation.

Some of her friends are hosting a brunch to spread awareness about the living donor program next month.

A black organ recipient doesn't have to have a black donor but the best match comes from a donor with the same ethnic background.

The Garner family hopes to erase the stigma of living donation, especially among African-Americans who are reluctant to give and sign up for organ donation.  Here’s more information on living donation.

“I looked at the Midwest donor registry for Minnesota, and for year to date, the majority of the donors have been white. There were zero African American donors,” Coral Garner said. “The number of black living donors is extremely low. Led me to question what are the myths or fears that circulate in the African American community that make people hesitant to be living donors?”

Research has shown mistrust of the medical system, suspicion of the process and fear of jeopardizing their own health. Christina Garner says black patients on dialysis at one of her clinics tried to discourage her from seeking a donor.

But, she has a message for anyone fearing the process.

“There is not much to worry about. You may have better health after because the way they manage your care before and after,” Christina Garner said. “You only need one kidney to live.”

Now, the family waits and hopes for a better outcome.

“Hoping we can find someone to give her another chance, another chance to make a change in the world we live in,” her father said. “She is remarkable and I am not just saying that because she is my daughter. It takes courage to do what she does.”

Thirteen people die each day while waiting for a kidney.  Statistics the family knows, but hopes never become their reality.

“I feel the clock ticking every day.  My biggest fear is that Christina will become too sick to be a kidney transplant candidate,” her mother said.  “We have always looked at her on dialysis as a temporary fix and not a permanent way of life. My prayer is that it doesn't become a permanent way of life and that we will hopefully soon find someone who is match for her.”

If you would like to learn about becoming a match for Christina  or organ donation visit this website.