Gloria's Place will be the only emergency shelter in Minnesota specifically for unaccompanied pregnant or parenting homeless youth and their children. 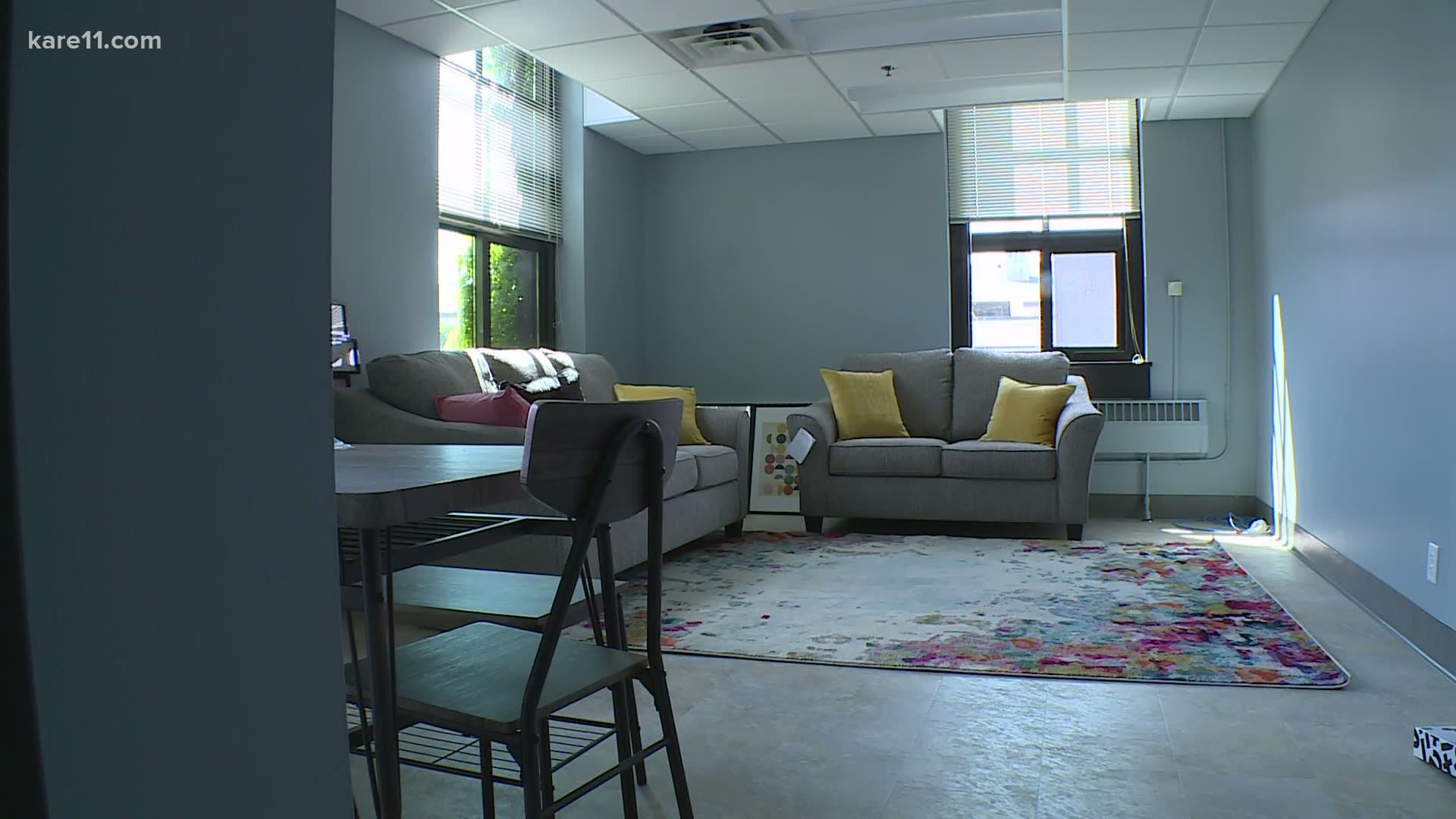 MINNEAPOLIS, Minnesota — For 50 years, The Bridge For Youth has been providing services for runaway and homeless youth. The Minneapolis-based nonprofit is now getting ready to mark another milestone. Later this month, Gloria's Place will open.

It will be the only emergency shelter in Minnesota specifically for unaccompanied pregnant or parenting homeless youth (ages 15-17) and their children (ages 0-3).

"I think we can look around and see homelessness with the encampments, we can see homelessness with people on the corner asking for money or food, but I want us to imagine looking around and do we see young people who are homeless? Not often. I feel like they are more hidden than the adults who are homeless in our community and yet they are so much more vulnerable," said Lisa Mears, executive director at The Bridge.

RELATED: "It was tough." Minneapolis park board member Londel French talks about decision to lessen homeless campsites in parks

According to Wilder Research, about 6,000 Minnesota youth on their own experience homelessness on any given night. 35% of all homeless youth are parents.

"Our youth here at The Bridge are extremely vulnerable and they may also be exploited to varying degrees to survive. That's why when we think about parenting youth, it becomes that much more important that we have a space where they can come to for immediate shelter, food, the safety and security of staff that are providing supportive and hopeful services for them," Mears said.

Gloria's Place will be the only emergency shelter in Minnesota specifically for unaccompanied pregnant or parenting homeless youth and their children. @BridgeforYouth will open Gloria's Place on August 17. Watch the story on @kare11's Breaking the News at 6:30. pic.twitter.com/g5JJlU8nRY

Mears said Gloria's Place is named after Gloria Segal, adding, "She was a representative in the Minnesota House and a staunch advocate for not only women's rights but mental health."

The emergency shelter will have six beds but because of COVID-19, they'll start off with four (the number of rooms at Gloria's Place) so each family has an individual room for social distancing.

"We get crisis calls and crisis text messages from youth who are either pregnant or are already parenting looking for shelter and there just hasn't really been a shelter to meet their unique needs," said Molly McInerny, emergency services manager at The Bridge.

RELATED: When stay-at-home is not an option: Organization helps homeless youth during pandemic

Programming at Gloria's Place will include case management, on-site healthcare, an on-site therapist, individual and group counseling, as well as things like play groups.

The goal is to provide a safe space for teen parents to come in and figure out their next steps.

"We want to reunify families. So that's kind of always an ultimate goal but we've also found that it's not always the best solution or it might not be possible. So in Gloria's Place, we're kind of rethinking what is reunification.  Maybe it's not physical. Maybe it's in support and relationships," McInerny said.

Those at Gloria's Place will be able to stay there for up to 90 days. For more long-term housing for teen parents, The Bridge opened Marlene's Place in April 2019.

Homeless pregnant and parenting youth are part of the transitional living program and can stay for up to 18 months.

"If you think about a young person who is really just trying to figure out where they're going to be from night to night with their child, they're not able to really think about the long-term success," said Rachel Hatch, supportive housing manager at The Bridge.

According to Hatch, since opening last year they've served more than 25 families.

"I think around 83% have moved on into their own independent living, market-rate apartment. They've graduated high school. They've gone on to college. So we've seen a lot of success in that program with kind of a stopping point for young people just to figure out next steps," Hatch said.

If you'd like to help, The Bridge For Youth has set up a Target registry to help make Gloria's Place feel like home.

You can also donate to The Bridge through their website.

The Bridge is also looking for artists willing to work with them on a donation basis to transform their space through murals and art. Those interested may contact Mears through the website.