The Washington Post apologized after it changed its headline in death of ISIS leader. 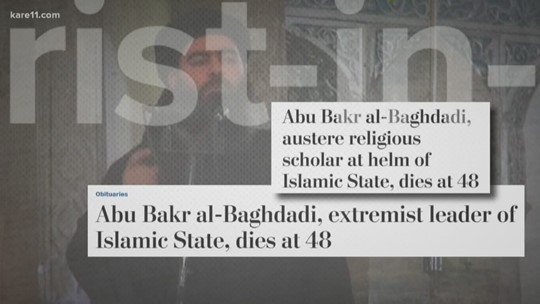 It, of course, was the biggest news of the day covered by news outlets everywhere.

The Washington Post, offered up an obituary on the leader, headlined, "Abu Bakr al-Baghdadi, Islamic State's 'terrorist-in-chief,' dies at 48."

But for some reason, the paper changed the headline to instead call al-Baghdadi an, austere religious scholar at helm of Islamic State.

Conservatives called the paper out for trying to make a terrorist seem like a sympathetic character.

But even Democrats, like Senator Amy Klobuchar and Representative Ilhan Omar, used their voices and platforms to describe the man for what he really was.

The Washington Post apologized and changed the headline, yet again.

"Certainly the reaction that the Washington Post gave to the blow back that they got suggests that this was not a well thought out headline," said Jane Kirtley, the Silha Professor of Media Ethics at the University of Minnesota.

Kirtley says changing headlines is nothing new...but our environment is.

RELATED: In Chicago, Trump calls the city an embarrassment to the US

"In out highly partisan environment, where people are very divided and are looking to take offense. It's very likely that you can't really win in a situation like this," Kirtley said. "I'm not here to be an apologist for the Washington Post, but, in this instance, I'm guessing that they were trying to thread a needle and come up with a somewhat neutral headline, and in doing so they managed to offend everybody.

"There's two issues here, one is the need for speed, the pressure to publish something very, very quickly and get it up online and the other is the way the reader consumes that. They click on a headline, maybe they don't even read beyond the headline, and that can give them a false impression about what the story is about."

But this particular reporter would argue that, especially now, when people are trying to figure out which sources they can trust, that we earn that trust every day. The words we choose are important.

"Good news organizations make mistakes, that's inevitable." Kirtley said. "The question is do you correct those mistakes? And good new organizations do, but because of the nature of the internet, and the fact that nothing ever disappears, there will be those who have grievances that will revive that to further an agenda.Not to excuse this particular headline but just saying it's really hard to win in these situations because any mistake is seen as being part of some deep dark plot to undermine the President or undermine the President's opponents when in most cases, frankly, it's just a mistake."