Helping thousands of Afghan refugees stuck in Wisconsin hasn't been easy. Here's how one Minnesota woman is doing it

Roughly 35 Afghan refugees have been placed in Minnesota in the last month, with more than 300 still expected. Sonia Anunciacion is waiting to help them. 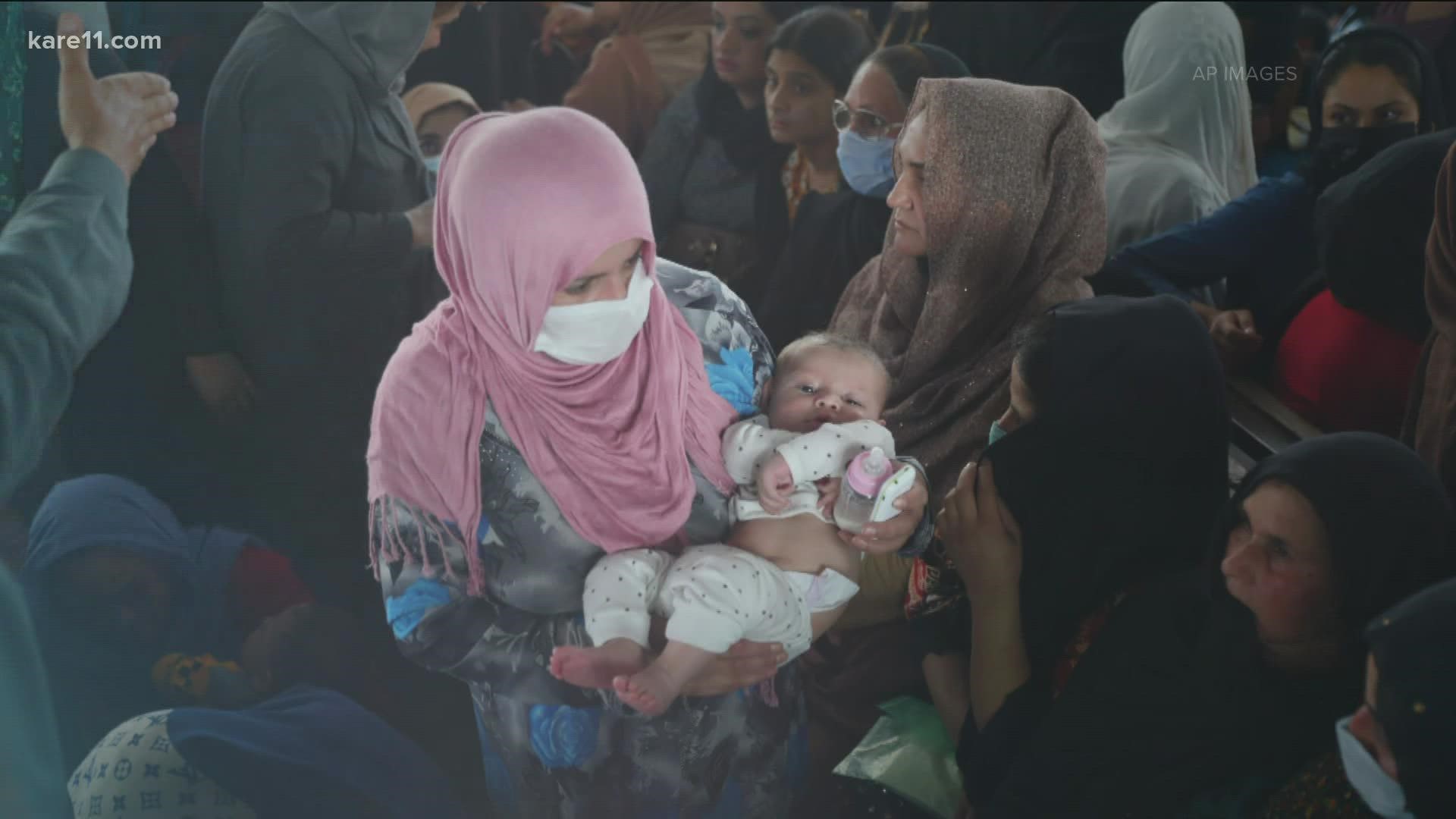 SHAKOPEE, Minn. — Several weeks after the chaotic and deadly U.S. withdrawal from Afghanistan, Sonia Anunciacion has moved dozens of boxes of donations for Afghan refugees through her home in Shakopee.

"This basement was full, there wasn't much room to move," Anunciacion said, while showing KARE11 the boxes of diapers, toys, clothing and other household goods that are still stacked in some corners of her home.

Anunciacion has now organized five donation drives and fundraisers in the Twin Cities in the last few weeks. Not bad, considering she didn't have extensive knowledge of the evacuation and resettlement process, beyond the experience of her own extended family.

Anunciacion: "In the first days of the evacuation, I was talking a lot with our family. I was getting just really, really absorbed into it all and then hearing about all the refugees that were coming into the states. I wanted to get involved and just do something."

Erdahl: "You're family. Are they still in Kabul?"

Erdahl: "How is life over there right now?"

RELATED: 'The Afghan in us never leaves' | Family who fled Afghanistan in the 80s helps welcome refugees

Anunciacion is still trying to work with legislators to advocate for her family's evacuation, but that hasn't stopped her from delivering those donations - via Uhaul truck - to the thousands of other Afghans stuck in limbo at Fort McCoy in Wisconsin.

Kent: "How is life on the base right now? Are you in touch with some of those families?"

Anunciacion: "I am. I spoken with a couple of people there. Some of them are going to bed hungry, so there isn't enough food. A lot of them still have the clothes on that they came in with. Imagine a month in the same clothing. There's over 12,000 people there so the more we can get to help out, the better."

Sonia says she hopes to make another delivery soon, but doing so is complicated.

Anunciacion: "We can't send items directly to Fort McCoy, but we have a contact there. We've been delivering to his home. He works in Fort McCoy and he's able to then deliver all of the items to the base."

Erdahl: "To have to go through an intermediary just to get things to people seems a little backwards."

RELATED: Yes, there is a vetting process for Afghan refugees coming into the US

Anunciacion: "It is, and I'm so thankful for this contact, otherwise we'd still have everything in our basement. I don't think they have a lot of support from the government. I know, in Minnesota, they have some support, but in Wisconsin it's not as much. So we're doing everything we can to provide for them."

That's why, in addition to the donation drives, she has helped plan an upcoming a fundraiser at the Northwest Islamic Community Center in Plymouth, on Saturday, Oct. 8. Anunciacion says refugees in Wisconsin have also created Amazon wish lists so that they can quickly get specific items they urgently need.

For Minnesotans who are willing to connect with refugees who have already made it into the state, Anunciacion says the needs and wish lists are slightly different because many are trying to start work or school.

Anunciacion: "I'm looking for families who are willing to sponsor local families who have resettled into Minnesota. People who can purchase items on their wish list and might be willing to connect them with jobs or transportation solutions."

Erdahl: "If someone is thinking, that's a whole lot of ways to give, where should I start? What would you tell them?"

Anunciacion: "If you're looking for a way to help and you don't know how, just email me. I'll navigate that and help you out."