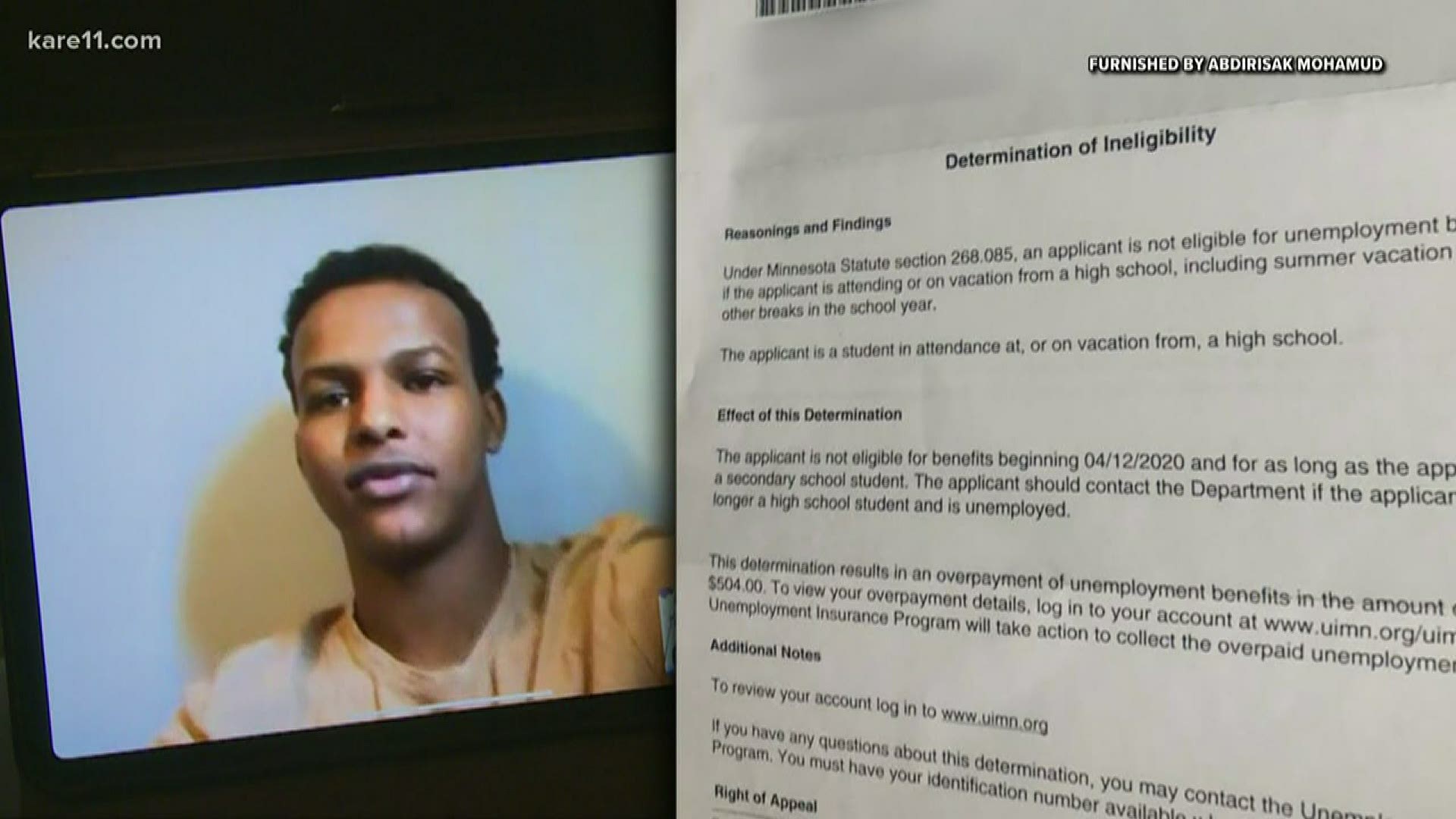 MINNEAPOLIS — In Minnesota, high school students can’t receive unemployment benefits while enrolled in school. But somehow – some students who lost their jobs applied and were approved. Then, after receiving and spending the money the state wants the money back.

Cole Stevens is a senior at Roosevelt High School in Minneapolis. He said he applied for unemployment insurance and was approved.

“I was happy about that. We were behind on some bills so I used that money to pay those bills. Then two days later I got a letter asking for all of it back, $1,314 they wanted back from me,” Stevens said. “Worse than broke I am now in debt.”

Stevens said he used the money to help pay rent and keep the Internet running - an essential as he completes his last week of distance learning before graduation.

But Stevens is not alone. Washburn High School  junior, Abdirisak Mohamud, said when he lost his job due to COVID, his previous employer told him to apply for unemployment.

He applied, was approved and received pay.

Then, he received a letter from DEED saying the applicant is not eligible for benefits. The letter Mohamud  shared with us also said The determination results in an overpayment of unemployment benefits in the amount of $504.

“They want everything back. Everything. If I would’ve known from the beginning I wouldn’t have applied, this is more problem right now,” Mohamud said. “I don’t know how I am going to pay the money back. I used it to help my family and fix my car.”

Mohamud said 12 people live in his home, including his parents. Like Stevens, Mohamud said his family relies on him for support.

We reached to the Minnesota Department of Employment and Economic Development  (DEED) to find out how this happened and how many students have been impacted.

Jake Loesch, a spokesperson with the department  said DEED can’t comment  on individual cases. Loesch, said it is an “uncommon error” and sent the following statement:

Minnesota Unemployment Insurance Law holds high school students ineligible to receive benefits until graduation. The Minnesota Unemployment Insurance program has seen more applications in the past two months than we saw in the previous four years combined, and there are added complexities as we are also processing an entirely new group of recipients under the federal PUA program for self-employed and independent contractors.

DEED works very hard to ensure we’re paying only those who are eligible for unemployment insurance benefits. When we find out someone got paid who shouldn’t have, we have an obligation to Minnesota taxpayers to correct the situation (known as an “overpayment”). If someone disagrees with an overpayment determination, they have the right to an appeal – and for non-fraud overpayments, we do not charge any interest or penalties.

DEED also would not tell us how many letters it has sent to high school students requesting reimbursement.

Meanwhile, Stevens said he loves creating music and anything that makes noise. He said he will continue to use his voice as an instrument to shed light on a pricey predicament.

“I want the state to Minnesota to see this is a ridiculous law. I do not think I should have to pay that money back,” Stevens said.  “It is an 81-year-old law. Times are changing. If they want the economy to pick up people need money. Kids works hard and in some cases, harder than adults because nobody ever takes us serious."

Earlier this month, we profiled a chorus of high school students fighting to change the state’s law.

Cole is marching to the same beat.

“My taxes go into that system. This is an insurance system for workers to pull out of when we need it the most. And we need it now.”

Cole said he has appealed the determination and has a hearing on July 2.