Celia Grace Hamlett's family was notified Thursday that BCBS of Alabama reconsidered covering her treatment after denying an initial request and appeal. 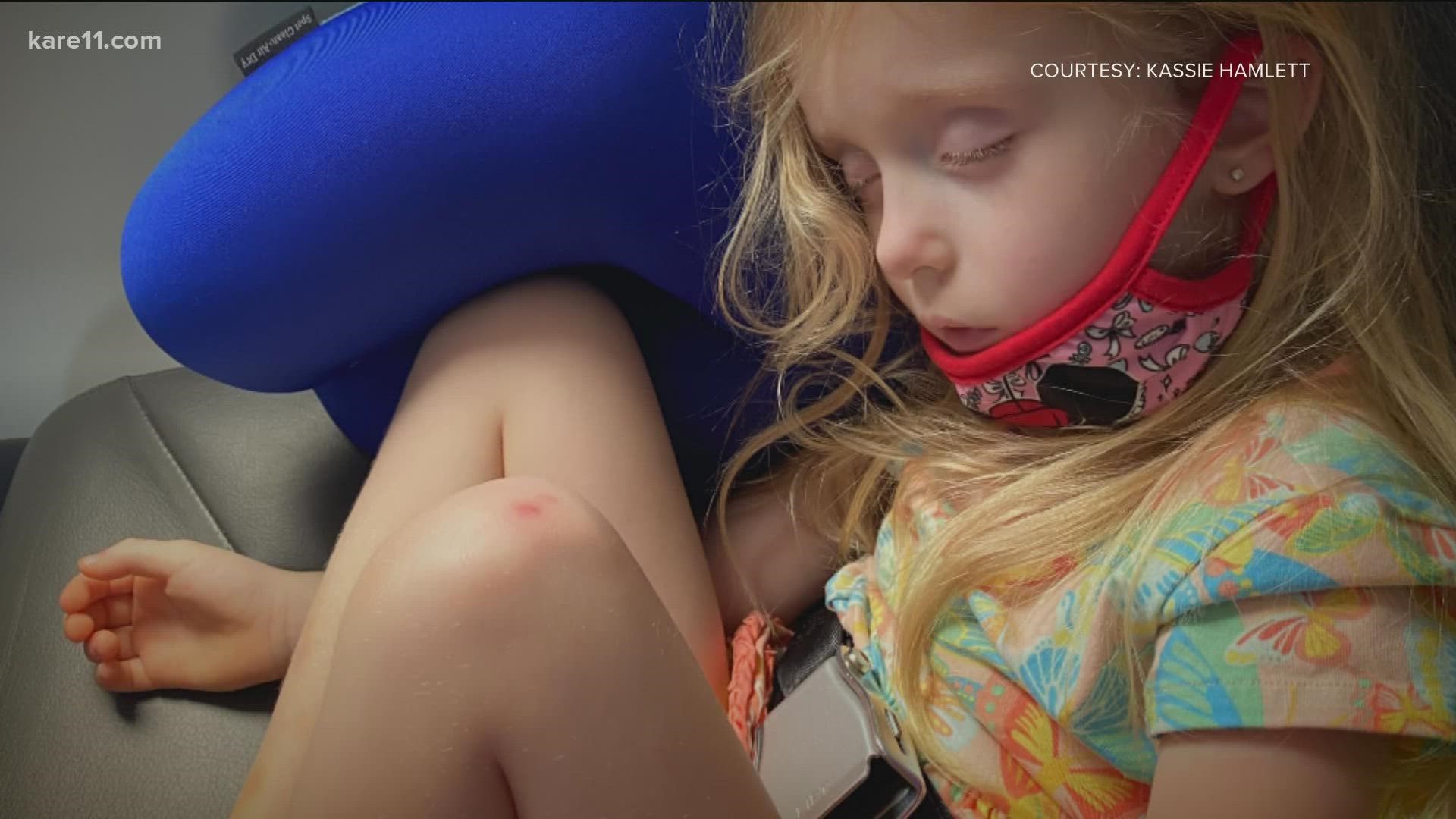 After KARE 11’s initial reporting, the Hamlett family says their insurance provider has reconsidered. After their initial request for coverage - along with an appeal from Dr. Orchard - were denied by Blue Cross Blue Shield of Alabama, the family says they are now told that that it will be fully covered.

That means Celia Grace can begin her gene therapy treatment next week, just a few days later than planned.

UPDATE: After airing our story tonight, I’ve learned that Celia’s insurance provider has reconsidered. BCBS of Alabama tells the family they will now cover her gene therapy. https://t.co/UG4mVyjF9B

The Ronald McDonald House in Minneapolis has become a home away from home for four-year-old Celia Grace Hamlett.

In the past year, Celia Grace and her parents have traveled to Minneapolis four times in search of a life-saving treatment.

"We would love to wake up from this nightmare," said Kassie Hamlett, Celia's mother. "When you look at her you can't even tell."

Though Celia appears to be a typical, energetic four-year-old; one year ago, a bizarre tummy ache led to an MRI, and her doctor discovered a mass in her gallbladder.

"He said there was a neoplasm inside the mass that was associated with a disease called metachromatic leukodystrophy (MLD)," said Gary Hamlett, Celia's father.

Against the advice of their doctors, the Hamlett's googled MLD.

"We learned that if it goes untreated, she won't live to be a teenager," Kassie said. "We went numb. Our life was turned upside down."

MLD is a rare, inherited disease affecting just one in 40,000 people, in which your body can't produce a critical enzyme.

"It affects the brain, it affects the nerves, it's progressive and it's lethal," said Dr. Paul Orchard, a Pediatric Blood and Marrow Transplant Physician at M Health Fairview. "Historically, we've done bone marrow transplant using cells from a donor that can make the enzyme. Unfortunately, transplantation is associated with a lot of complications and sometimes kids die going through transplant."

But Dr. Orchard says Celia's current health, makes her a great candidate for a new type of gene therapy trial, that began in Milan, Italy. He says it's been so promising that he and his team at the Masonic Children's Hospital convinced the FDA to make Celia the first patient to receive the treatment in the US.

"I think it's really an opportunity to move the field forward and to better treat the kids," Dr. Orchard said.

"We were ecstatic," Kassie said.

"We had been making plans for the long journey to Milan. Four to five month stay," Gary said.

Instead, Celia spent a few days in Minneapolis back in July, as doctors removed stem cells so they could be sent to Italy. Specialists there engineered her genes to produce the enzyme she needs.

"The doctors are helping make me better," Celia said.

But now, just days before she's due to receive her newly repaired genes, everything has stopped.

"Blue Cross/Blue Shield of Alabama has denied further progress of this," Gary said. "My heart sunk."

"To be totally denied of paying anything is just indescribable," Kassie said.

Dr. Orchard wrote an appeal to the insurance company in hopes of reversing the decision, but that appeal has been denied.

"It should be safer, more effective, and - at least in this circumstance - cheaper than what we would otherwise be offering," Dr. Orchard said. "I haven't seen the language of the contract but some of the insurance contracts say, essentially, they won't pay for experimental therapy."

Friends and family have now started a fundraising site to help the Hamlett's with the cost of the surgery, which could now approach $300,000 out of pocket.

"I told them, whatever it takes, I'll do what I gotta do," Gary said. "I'll work the rest of my life in order to save her life."

"I'll take out of my retirement if I have to," Kassie said.

"At this point, clinically, she looks great, but on MRI there are clearly changes that have already occurred," Dr. Orchard said. "So it's critical for us to be able to move forward before she has any symptoms."

"We're just begging and pleading for somebody to help us, to make them change their mind," Kassie said. "If it was their child they would change their mind. If anybody knows Celia Grace, how normal she is, we want to keep it that way."

The Hamlett's say they are working with their doctors and their legislators in hopes of changing the mind of their insurance provider. In the meantime, if you'd like to help, click here.