Signs with the message "Whites Only" or "Colored Only" are images often linked to segregation. But a team of three – including two historians and a computer programmer-- discovered segregation in Minneapolis was more powerful than signs that outlined racial boundaries. 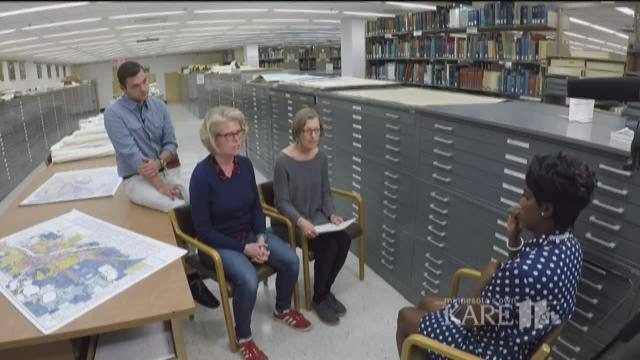 MINNEAPOLIS - Signs with the message "Whites Only" or "Colored Only" are images often linked to segregation. But a team of three – including two historians and a computer programmer -- discovered segregation in Minneapolis was more powerful than signs that outlined racial boundaries.

Working in the basement of the Wilson Library at the University of Minnesota, the group are members of the Mapping Prejudice project. They've discovered thousands of Minneapolis deeds with racist restrictions.

The team includes community activists, students and scholars from Augsburg University and the University of Minnesota.

One common Minneapolis covenant reads: "the said premises shall not at any time be sold, conveyed, leased, or sublet, or occupied by any person or persons who are not full bloods of the so-called Caucasian or white race."

"People think that because we didn't have segregated water fountains or waiting rooms that we didn't have segregation in Minneapolis but racial covenants determined who could live where," Kirsten Delegard said. "They say these covenants were in place from 1910 to 1960's but they have been illegal so why are we dredging up this old history? It forces a fundamental reconsideration of what we know about the past."

Delegard, the project director, said the Mapping Prejudice project plans to identify and map racial restrictions buried in historic Minneapolis property deeds. These restrictions, known as racial covenants or racially-restrictive deeds, were used in most American cities before 1968 to prevent people who were not white from buying or occupying property. Nobody has ever shown how much of the urban landscape was saddled with these restrictions.

Once complete, Delegard and her team of researchers will have mapped the first comprehensive map of racial covenants for an American city.

"We are still living with the legacy of these policies. We can point to all kinds of disparities especially in area of home ownership that we are living with today because of these polices enforced over the last century," she said.

Kevin Ehrman-Solber, the project manager, showed us the portion of the map that is complete.

"Each one of these dots denotes a home that was off-limits to anybody who wasn't white," he said. "Take a look at south Minneapolis, which is now zoned exclusively as single family homes. These homes are worth $40,000-$500,000 today. Financially barrier of entry of moving into this neighborhood is massive. The only folks once allowed to move in to these homes were white people."

Ehrman-Solber said today Minneapolis has the lowest home ownership rate in the country.

Penny Petersen, the property records specialist who works with the project said, reading the documents is still tough.

"In other words, you could lose the property if you violated this covenant," she said. "I was horrified. This is a violation of the 14th Amendment. It is horrible. I didn't find just one or two. These appear in deeds across south Minneapolis and around Lake Nokomis."

The group plans to complete mapping Minneapolis by May. Their work started with the Historyapolis Project at Augsburg University.