The Dakota Skipper and the Poweshiek Skipperling used to be abundant. 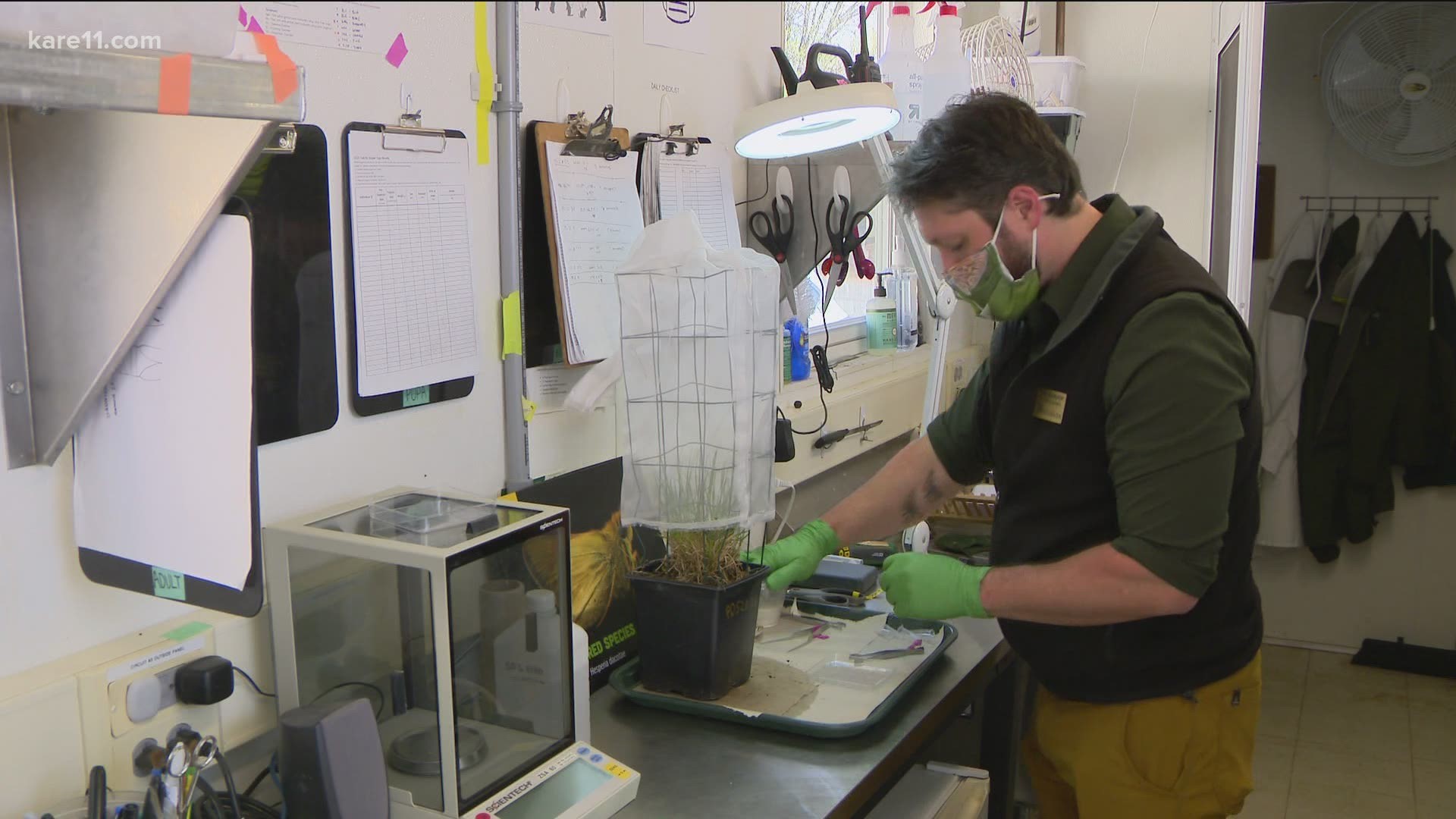 APPLE VALLEY, Minn. — At the Minnesota Zoo's butterfly conservation compound, there are creatures who have taken this social-distancing thing very seriously.

"I haven't seen any of these caterpillars since last October [when] we wrapped them up in their individual little vials," Butterfly Conservation Specialist Cale Nordmeyer said.

Only now, in April, is he getting to say hello again, because the endangered butterfly species has been hibernating, so to speak.

"This is the time of year, where we're actually waking up our Dakota Skipper butterflies," Nordmeyer said. "They actually overwinter as a half grown caterpillar. One of their superpowers is their ability to overwinter and survive the crazy weather conditions that Minnesota weather throws at them. They actually form antifreezing agents in their body-- similar to what you throw in your car--to prevent ice crystals from forming in their bodies and shredding up their tissue, to survive winter, out in the Minnesota prairie covered with snow before waking up in the spring and continuing their life cycle."

And while many are familiar with the declining numbers of monarch butterflies, the Dakota Skippers and the Poweshiek Skipperlings are both native species on a rapid decline as well.

"So when we hear the word endangered species we often think about species that are far away," Nordmeyer said. "The Dakota Skippers and the Poweshiek Skipperling, really, we are in triage mode. So species like the Poweshiek Skipperling, maybe global population - fewer than a 150 animals left. And right now we have about a 1/3 of that at the MN Zoo."

He said it's crucial we don't lose these butterflies.

"We're really close to that happening," Nordmeyer said. "Butterflies like the Poweshiek Skipperling and the Dakota Skippers represented at some point some of the most numerous butterflies in the Minnesota prairies. With the decline in prairies we've also seen a decline in these species and they're declining at a fast rate, if we don't intervene, we'll just lose them."

So, Nordmeyer spends his time behind the scenes at the Minnesota Zoo, going back and forth from the lab to the hoop houses, where he has nestled hundreds of sleepy caterpillars in their temporary metamorphosis habitat.

He still has hundreds more to wake up.

"Well they've now been sleeping in a freezer since basically last October, so I imagine they're a little groggy - not to anthropomorphize too much - and it does take them a while to get going," he said.

Once they get going though, it's with the goal of maturing and getting strong enough to fly off.

"It's the most rewarding part of my career," Nordmeyer said. "It's exactly what we want to do. We started the pollinator conservation program at the Minnesota zoo to provide a safe space for these imperiled species that are otherwise declining from the wild, but we didn't do this so they would just live here at the Minnesota zoo indefinitely. We did this to get them back out into the wild."