Britain and Denmark have opted to delay the second dose of their COVID-19 vaccines, in order to vaccinate more people, faster. 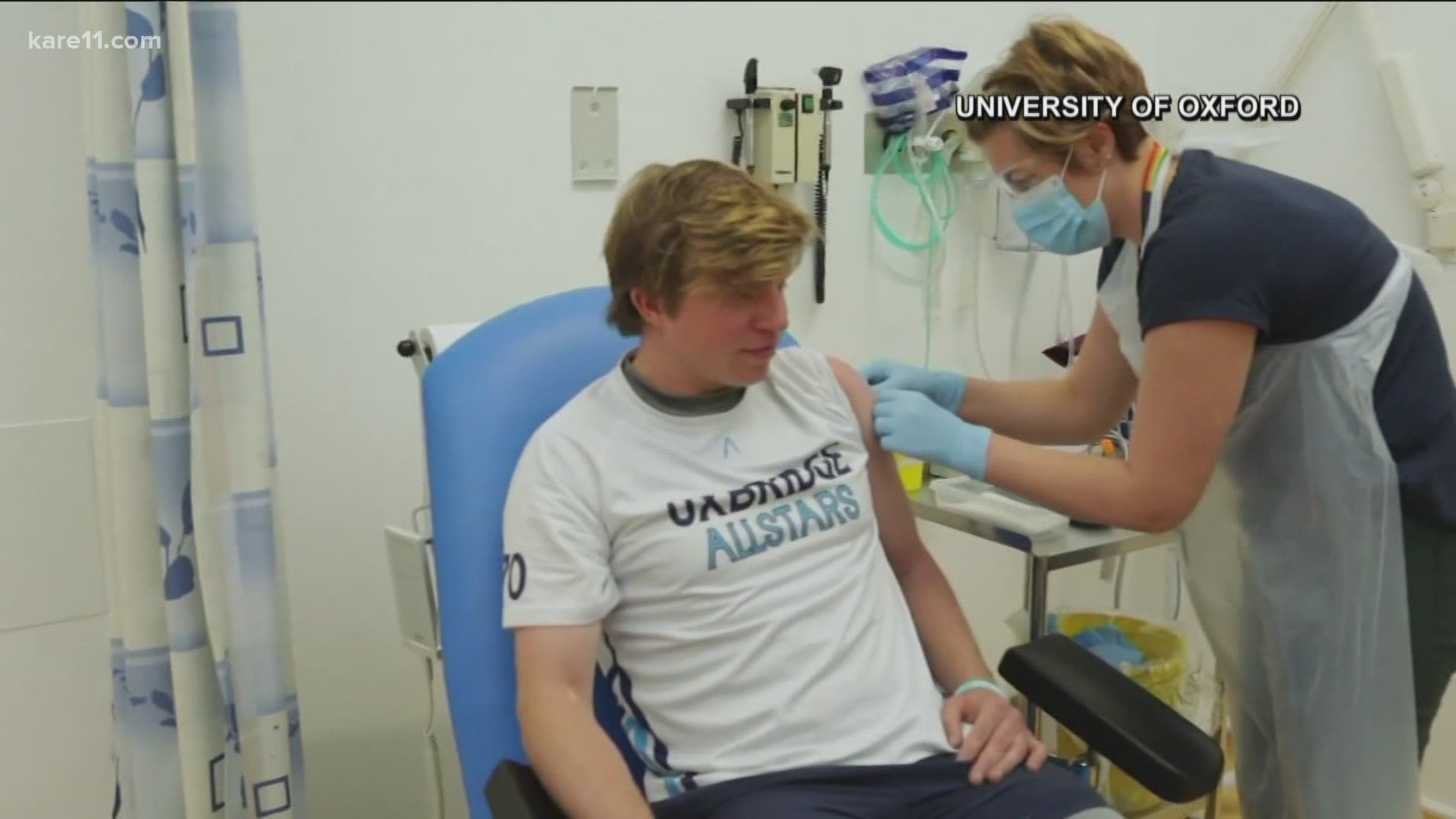 MINNEAPOLIS — Healthcare workers at the Minneapolis VA received a second dose of history on Monday, becoming the first Minnesotans to receive both doses of the Pfizer/BioNTech COVID-19 vaccine.

But the milestone comes at a time when some foreign governments are deciding to delay the second dose of the vaccine in favor of a strategy that prioritizes more people receiving the first dose.

With a new COVID variant spreading rapidly through Britain, the government there is beginning to delay the second dose of both the Pfizer and Oxford-AstraZeneca vaccines, extending the standard three week interval between shots to 12 weeks. The goal is to cover as much of the population as possible at a critical time.

Denmark is moving toward a similar delay, and leaders in Germany are also considering it.

"It's time to change the plan; namely, we should give people a single vaccination now and defer their second shot until more doses of vaccine become available," wrote Robert M. Wachter, chair of the department of medicine at the University of California at San Francisco; and Ashish K. Jha, dean of the Brown University School of Public Health.

But the strategy has received considerable pushback from experts in the United States and beyond.

"I, personally, as an infectious disease doctor, don't think that it is, at this point in time, a good strategy," said Dr. Tim Schacker, vice dean of research for the University of Minnesota Medical School.

Dr. Schacker says he understands the urgency and says the push to delay the second dose is based on early trial results that showed the first dose had substantial benefit after just 10 days. But he says banking on sustained, protective immunity without a second dose is just a theory.

"They could be right, we just don't have the data," Dr. Schacker said. "That should be studied before we just launch into doing it in people. We do know that if you give the vaccine as it was tested, that it is extremely protective and, in the middle of pandemic, this seems like the wrong time to be testing that theory."

"The trials weren't designed around proving that that approach would be effective, so there wouldn't be as much science backing up those conclusions," Dr. Morice said. "It will just, essentially, introduce a lot more unknowns in terms of how protective that vaccine really is."

In addition, Dr. Morice says delaying the second dose could further stress states and healthcare systems, many of which are already struggling to handle long vaccination lines and a barrage of rollout issues.

"It creates a lot of confusion," he said. "Just logistically, keeping track of who got one dose versus two. I mean, that's one thing we don't think about, but that's a big part of this. If you do it close together, it's a lot easier to keep track of who has gotten two doses."

So far, a delay does not look likely in the U.S. Dr. Anthony Fauci, has said he's not in favor of delaying the second dose.

Dr. Schacker said he hopes there will be national guidance on the topic.

In response to the move to delay the second dose of vaccine, Pfizer and BioNTech issued a joint statement saying, in part, "There are no data to demonstrate that protection after the first dose is sustained after 21 days."