She said it was time people stopped feeling like visitors in their own city. 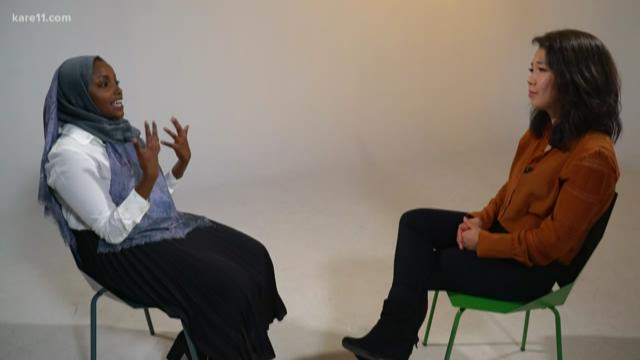 MINNEAPOLIS — Election day has come and gone and politics continues to make headlines. However, the politics of the day isn't about what's going on in Washington, but history made right here in the Twin Cities.

"I couldn't believe it," Mohamed said of her election. "I think it just hit me after my speech and I started bawling because I could not believe that I was a city council member. I woke up this morning and I was like okay, it doesn't feel different. Then I saw my phone, it was all over Twitter, Instagram."

Mohamed said she ran for the council spot because she saw something in her community.

"I had a vision for St. Louis Park," she said. "For the past four years, I've been doing a lot of community engagement. Making sure we're connecting and that people aren't feeling like visitors in their community."

When asked if she ever felt like a visitor in the community she grew up in, she nodded yes.

"I came when I was 10 years old," Mohamed said. "I went to the elementary school, middle school, high school. At times I'd go to school and come back home. I wouldn't be contributing to the community. I wasn't connecting with the community in a way I was just visiting. One of the ways I wanted to build my roots, it was maybe time to connect with the community members. Get to know them and what not."

RELATED: Results from the 2019 general election

She said sitting in on a council meeting sounded like a good start. When she did, she said she didn't see herself reflected in the chambers.

"I'm a renter, I am youth, I'm a person of color, I practice a different religion," she said. "All those identities might add to a fresh perspective. I know half the issues that the city council talks about. I live through it. When those policies are implemented, it affected me, my family and the whole city."

Mohamed is 23 years old. She said she was the first and last to doubt her abilities as a younger person on the council.

"For a long time, I was like, 'do you think it will be a problem that I'm 23?' there was a lot of rewiring that I would do to let people know that this is a strength," she added.

As the first Somali Muslim woman to serve on the St. Louis Park city council, she said she is excited to make history. However, said there's more to her than just breaking records.

"I feel very very much ecstatic but I also want to caution people, not to stop on my identity," she said. "Yes, I am the first of many of the things but I will be more. I want to be more than just my identities."

Mohamed said affordable housing is one of the top issues she wants to tackle first. She swears in the first week of January in 2020.