The informational picket comes after a brutal attack on a nurse at the facility after she wouldn't give him Tylenol. 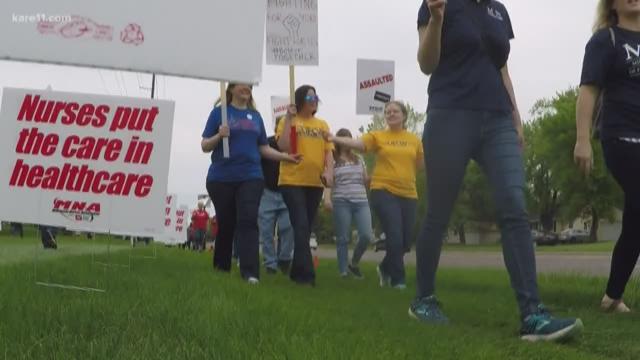 Starting at noon on Wednesday, members of the MNA, AFSCME, and MAPE will picket outside of Anoka Metro Regional Treatment Center. They're demanding full-time security on site and also want more staff added to the facility.

This informational picket comes after a recent attack on May 9 on a nurse at the facility. According to the criminal complaint from Anoka County court, 29-year-old Andrew Taggart is charged with third degree assault after allegedly punching a nurse several times in the face because she wouldn't give him Tylenol when he initially asked for it.

"If clients and patients are so stressed and worried about their own safety it doesn't provide a very therapeutic environment for anyone to get better and progress and move to the next place," said Carrie Mortrud, a nursing staffing specialist with the Minnesota Nurses Association.

Mortrud says there is no longer a uniformed security guard inside of the facility. She and other nurses, say they want that changed immediately.

"We do know that a person in a uniform or some sort of security uniform does provide a different level of security alone for the patients and for the staff there," she said.

Minnesota Department of Human Services (DHS) Commissioner Tony Lourey released the following statement when contacted by KARE 11 about the concerns of nurses at the Anoka Metro Regional Treatment Center.

“Nurses and other staff who care for patients in our psychiatric facilities have difficult and potentially dangerous jobs. I recognize and respect that they face challenges every day," Lourey stated. “I met this week with staff and labor representatives at AMRTC who are raising concerns about safety. Their insights and participation are essential to maintaining a safe workplace for staff and patients alike. Safety is a shared priority, and I’m confident that together we can address those concerns in a meaningful way.”