Due to inspections, the Mississippi River in downtown Minneapolis has been drawn down — revealing parts typically hidden by the water. 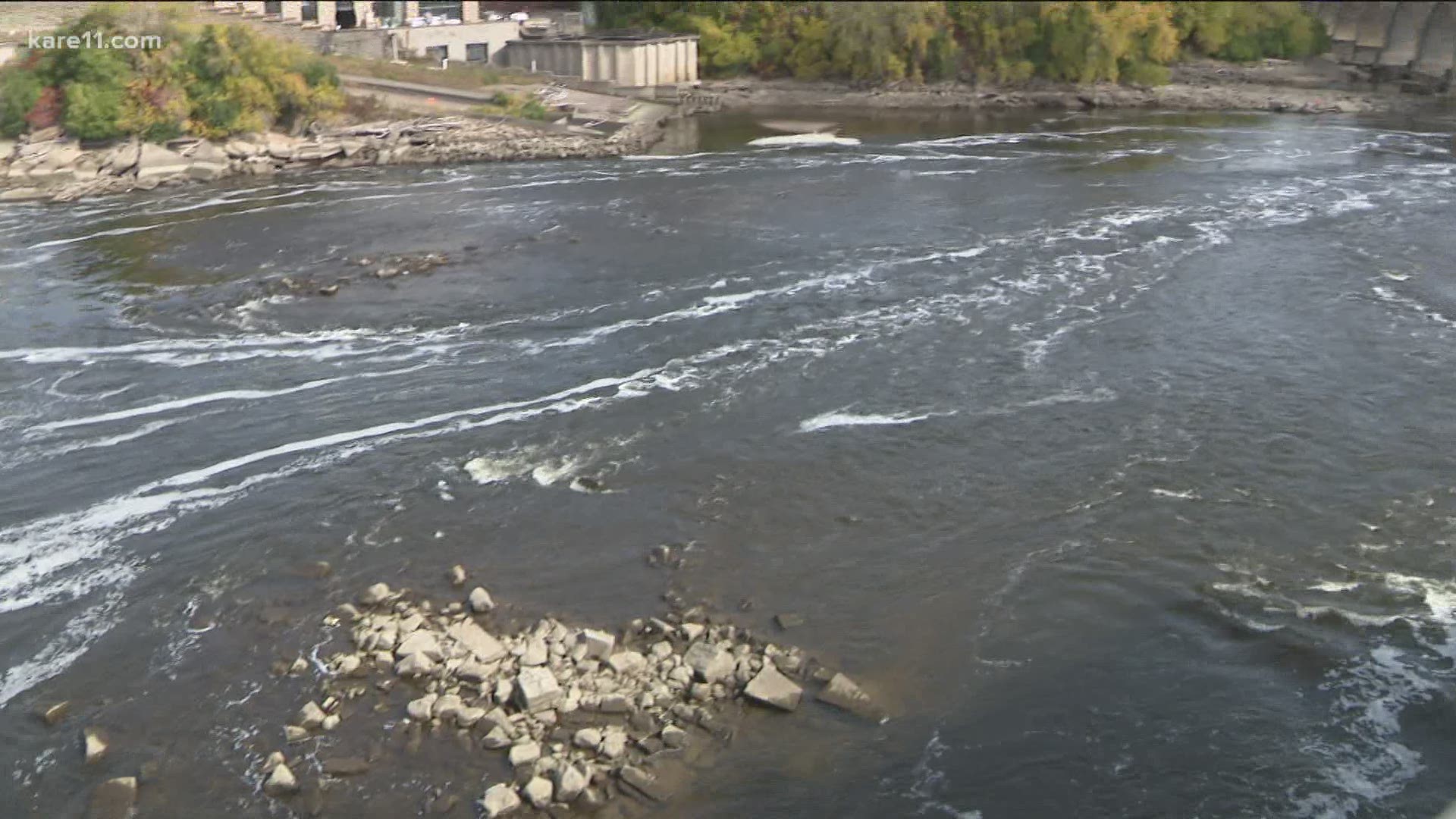 MINNEAPOLIS, Minnesota — This week, visitors can get a rare look at the bottom of the Mississippi River in downtown Minneapolis.

They started the drawdown a few days ago and Tuesday it reached its target level.

Crowds could be seen at the Upper St. Anthony Falls Lock and Dam on Tuesday afternoon, taking photos of the river.

Laura Madsen of Minneapolis was there with her homeschool group.

"We've been kind of studying the history of Minnesota," Madsen said. "I read an article where you can see more of the Stone Arch Bridge and you can definitely see that. I think you can see the rapids that were supposed to originally be here so it's pretty cool."

Adam Barrett of Minneapolis visited on his lunch break.

"I think the last time I maybe took a field trip down here was probably in second grade with my Minneapolis Public Schools class and so it seemed like a good opportunity to wax nostalgic but also learn a bit about the lock and dam," Barrett said.

Mississippi National River and Recreation Area
What was the Mississippi River like long ago? The modern Mississipp... i is held behind dams that make it wider and deeper for more than a quarter of it's length.

"It's a gorgeous day and this is one of the rare occasions where we have drawn down the water between the Upper St. Anthony Falls lock and the Lower St. Anthony Falls Lock. So there are areas that are exposed to public view that normally would not be exposed. So it's a good opportunity for us to look at our structures and also for the public to look at what's normally under water," said Nan Bischoff, project manager for the U.S. Army Corps of Engineers in St. Paul.

According to Bischoff, while they do inspections every 5-10 years, they haven't lowered river levels since 2008.

"There are historic structures that are exposed. If we go downstream a little bit there are some bridge piers that are still in the water that get exposed when the water drops down," Bischoff said.

Credit: Jason Steussy
According to Bischoff, while they do inspections every 5-10 years, they haven't lowered river levels since 2008.

It's also a snapshot of what parts of the Mississippi River looked like prior to the lock and dam. The lower lock was constructed in 1956 and the upper lock was completed in 1963.

The upper lock closed to navigation in 2015.

"The government is no longer interested in owning this site," Bischoff explained.

Because they are considering getting rid of the upper lock, this inspection will help them know the condition of the lock and what any potential owner should expect.

"There are two entities that have an interest in keeping this site open. It's providing a damming surface for the city of Minneapolis' water supply which is four miles upstream. So we need the water held at a certain level to support that. It's also supporting Xcel Energy's hydropower operations. So those are probably the two key players in making sure this site stays in good condition," Bischoff said.

The Upper St. Anthony Falls Lock and Dam will be open again to the public on Wednesday and Thursday from 10 a.m. to 4 p.m. Park rangers and volunteers will be available to help answer questions.

River levels will gradually return to normal once inspections are complete.

OTHER NEWS: Tips for getting fall leaves out of your gutters before it's too late