St. Paul animal control is investigating. The Humane Society of the United States is offering a $5,000 reward to anyone with info that might lead to an arrest. 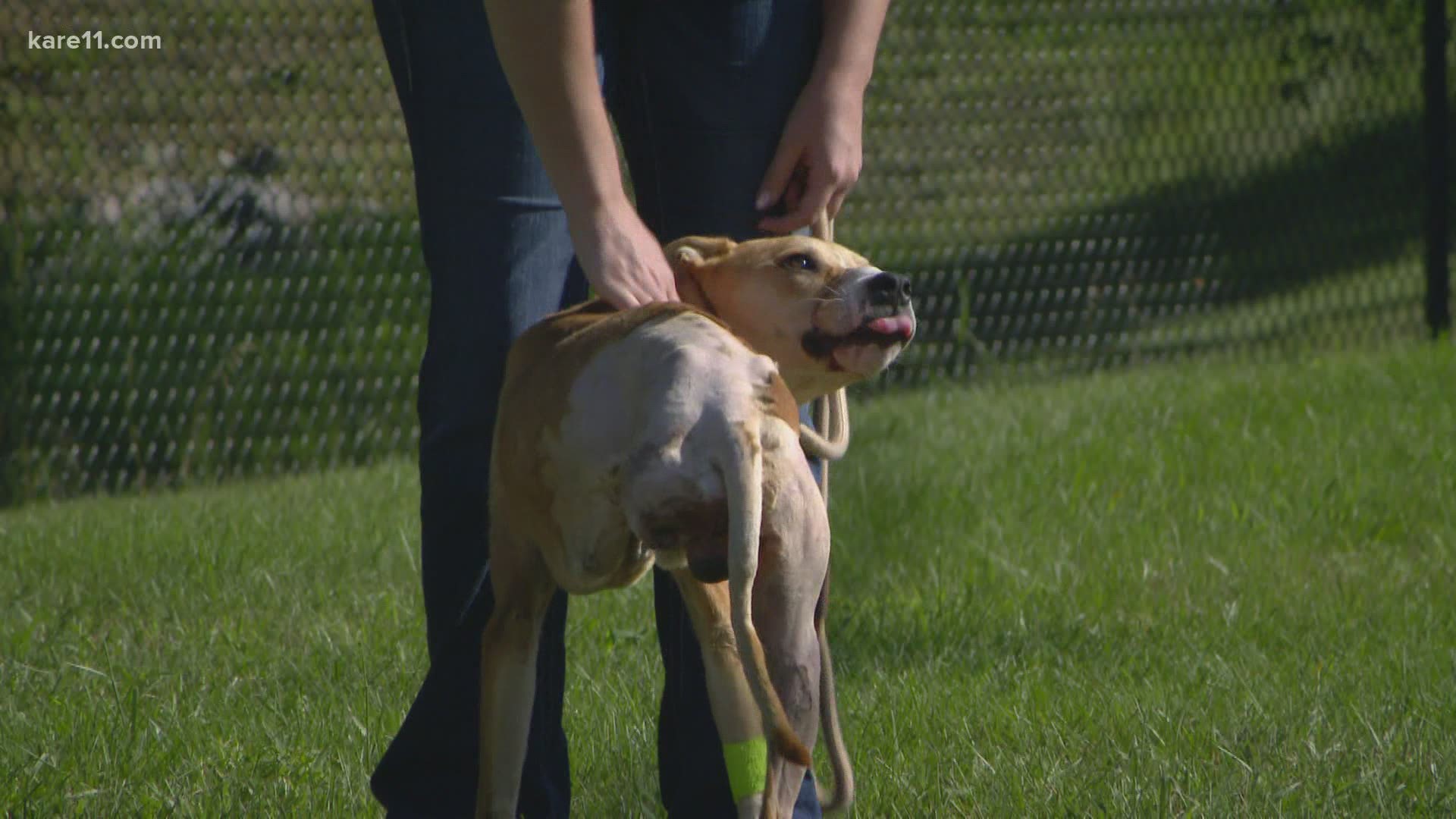 BLAINE, Minn. — Faith and loyalty from an animal may be among the few things humans take for granted.

"Last Thursday we got a call from both the local emergency clinic as well as St. Paul Animal Control," Liz Gigler said. Gigler is the director of Rescued Pets are Wonderful (RPAW) based in Blaine. She said her organization has been around for a while now, but only recently did she decide to focus on senior pets and animals with severe medical needs.

"Every single of these guys matter," she said. She added that she wanted to be the organization that took on the seemingly impossible cases. Riptide's case being one of them.

"A good Samaritan, an employee of the mosquito control was out surveying in a wooded area in St. Paul," Gigler described. "And came across [Riptide], thought he was dead, realized he wasn't and knew that he needed medical care and brought him into the emergency clinic."

There, staff saw Riptide covered in maggots. A rope was tied to his hind leg that was tied to a tree. It was cutting into his leg to the bone. His jaw was zip-tied, the plastic of the tie embedded into both the top and bottom of his muzzle, speaking to the amount of time he might have been tied shut.

Gigler said those are clues as to how many days he was tied up, or outside.

"You have to take into account, how long it takes for rope or a zip-tie to embed," she said. "Probably a couple of weeks. However it only takes a couple of days for maggots to produce the way they were. The conclusion we came to is that this dog was tied up and zip-tied in someone's home, inside somewhere because the maggots would have killed him in the time it took the embedded part to happen."

She said she's assuming that Riptide was then tied up, left out to die in the woods in St. Paul for a few days before he was found by the mosquito control surveyor.

Gigler said every animal cruelty case is a difficult one to look at but she said she could immediately tell, Riptide wanted to continue living.

She added that she doesn't only consider living cases to be a success. She said she takes pride in taking in animals and providing the most comfortable and dignified end-of-life care all animals deserve, if that's determined to be the best scenario for them.

However, that was the opposite for Riptide. His muzzle was severely wounded but Gigler said the flesh wounds will heal on their own and that when he is healed, it won't affect his daily life.

After his leg amputation surgery on Monday, he had no problems running around on three legs and slowly warming up to people around him.

Riptide's willingness to approach people proved that the love a dog may have for people might just be a bottomless well.

The investigation into Riptide's cruelty case is ongoing, led by St. Paul Animal Control. The Humane Society of the United States is offering a $5,000 reward for anyone who might have information leading to an arrest.

KARE 11 has reached out to the St. Paul Animal Control and they sent this statement:

“We appreciate your interest in Riptide and the investigation into this animal cruelty case. As you know, a tip from a concerned citizen led to Saint Paul Animal Control (SPAC) officers finding the dog tied to a tree. These cases are difficult to investigate. We look to residents in the immediate and surrounding neighborhoods who might have seen the dog prior to the incident so any attention could be helpful.

Our Animal Control officers are in the preliminary stages of their work on this; investigations into acts of cruelty can be very challenging when the animal cannot be immediately tied to an address or owner. Animal Control Officers are hopeful that, with the community’s help, they can locate the person responsible. The Humane Society of the United States is offering a $5,000 reward for information leading to the identification, arrest, and conviction of the person or persons responsible.

“Violence against companion animals is one of the strongest predictors for other crimes and violent acts,” said Animal Control Supervisor Molly Lunaris. “We’re hopeful that the community will come together and share any information they have about this case so we can prevent future violence in our City.”

Saint Paul Animal Control is thankful that Rescue Pets are Wonderful (RPAW) was able to take Riptide and give him the immediate medical attention needed. They are one of the many organizations SPAC partners with to ensure appropriate care for all animals that find their way to SPAC’s shelter.”