The Minnesota native and Harvard Business School alum is the founder of SayKid, a screen-less learning platform. 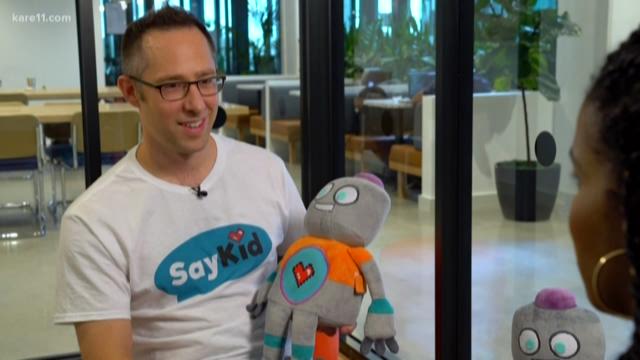 Learning doesn't start, stop or end in the classroom.

And DeLonn Crosby is trying move the education needle with screen-less technology.

The Minnesota native and Harvard Business School alum is the founder of SayKid, a screen-less learning platform.

“You have to reach kids early in life. Part of the problem is a lot of kids don't have access to early education,” he said. “You have to meet them where they are. That is often in their homes.  How do you reach kids in their home? What do all kids pay with? Toys but I didn't want to have a screen.”

The robot help kids solve problems, develop empathy skills and self-control.
In this game, Crosby says children must use critical thinking, flexibility, and persistence to solve the problems. The platform adapts to the age of each child.

“All of our software is around the kid playing the role of teacher, teaching the robot how to develop things like empathy and creativity,” he said. “The average kid spends almost 20 percent of their waking hours in front a screen under the age of 8. One to the things I know is really difficult to break a habit.”

He hopes to break habits of kids who spend countless hours in front of a screen.

The father of two said he has spent his career working at places like Google, Deloitte, and Target. He notes those companies invested millions in education, but he has yet to see those investments help children learn.

Researchers have said excessive screen time can damage brain growth.
The American Academy of Pediatrics recommends limiting screen time to one hour a day of high-quality programming. That's for kids between the ages of 2 and 5. It discourages media use, except for video chatting, by children younger than 24 months.

“It hasn’t been done before. There is no guidebook you can read,” he said. “It is hard stuff.”

But Crosby says he is learning through trial and error.

Now, it's possible his 21-century robots could be in classroom near you.

“You  can't move the needle without reaching kids,” he said.