The hardest job at the state fair

We are talking about the icemen. They are the keepers of cold, the lifeblood of freshness, and the kings of quench. 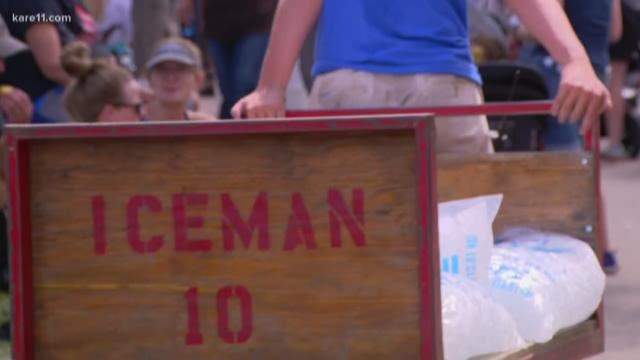 ST PAUL, Minn — There are so many people who work long, hot hours at the Minnesota State Fair to make it the event it is, but we found one job that might just top them all when it comes to hard work.

Without these guys, that ice-cold beverage you just slurped down would just be…a beverage.

We are talking about the icemen. They are the keepers of cold, the lifeblood of freshness, and the kings of quench.

RELATED: KARE at the Fair: Eating well with food allergies

Gopher State Ice Company has been hauling the frozen gold to vendors in dollies, on foot, at every fairground event for 45 years.

“The carts themselves are 300 pounds,” said Paul Abdo, who is a second generation manager of the company. “Each bag is 30 pounds, so if you do the math it’s 900 pounds per load.”

Nearly a half-ton on wheels, up and down the slopes of the fair, for which the ice movers are the engine, the brakes, and the bullhorn.

“Definitely moving through the crowds,” said 17-year-old Ryan Jordan who has hauled ice for 7 years.

Half of those steps are spent pushing or pulling the frozen payload to awaiting vendors.

It didn't use to be this way. Before 1992, Abdo said trucks and motorized carts were allowed to haul the products on the fair streets, but as the fair blossomed, the rules changed.

The job has become a proving ground, said Abdo, paying minimum wage to $13 an hour.

But Abdo said it offers a life lesson in work ethic and team building.

“You bring a 12, 13, 15-year-old kid here that has never done any of this before, and you say you need to load a cart, drive it to a customer and provide customer service. It blows people's minds because most kids these days aren't doing that,” said Abdo.

In the sweltering heat of the fair, keeping cold, is a hot commodity, thanks to sweat of the icemen.

“I love this job more than anything,” said Jordan.