A man was passing around fliers calling for the firing of Dr. Kelly Wilson, which included using photos of her children. 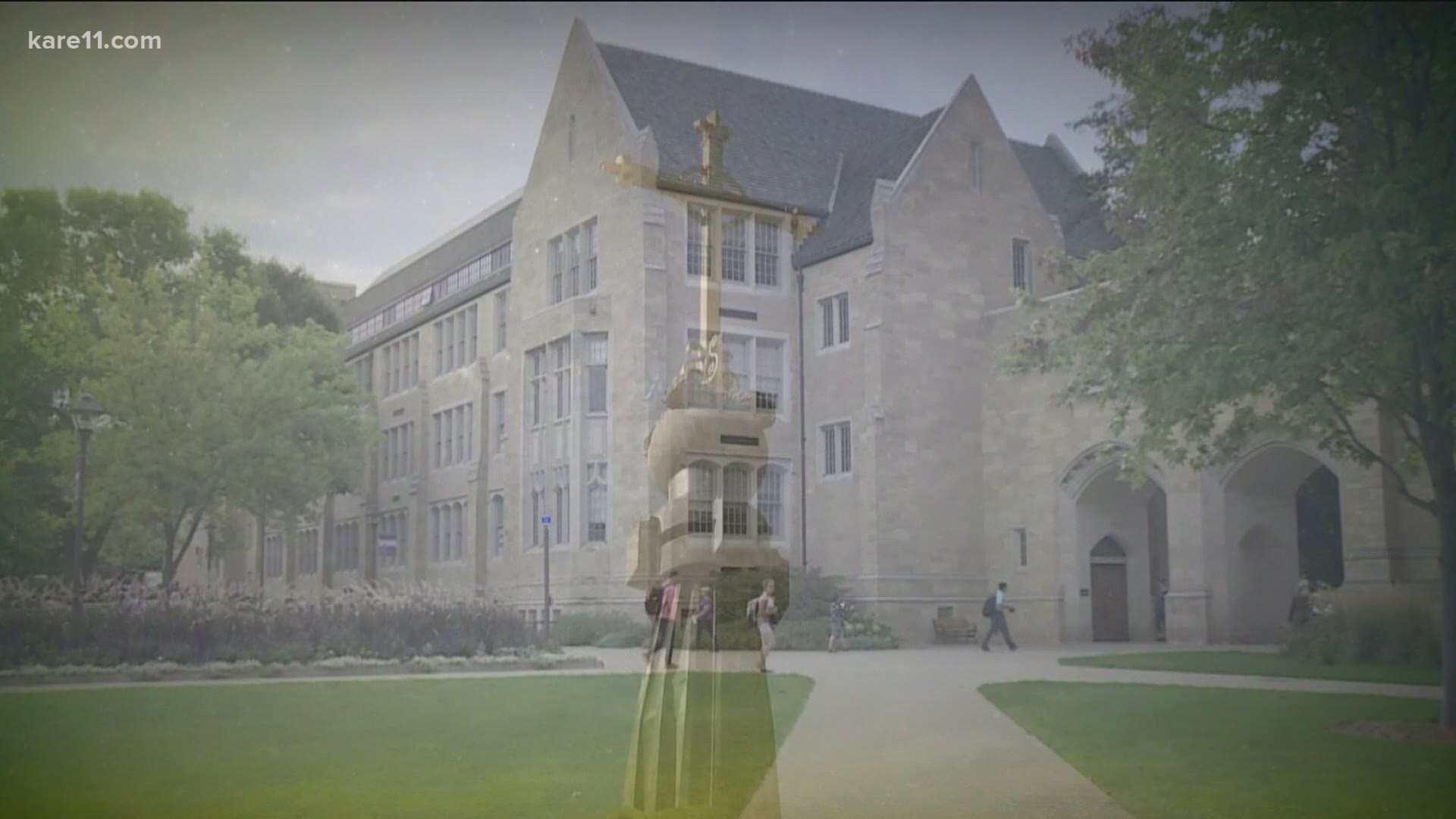 ST PAUL, Minn. — Dr. Kelly Wilson is a biblical scholar and has taught in the theology department at the University of St. Thomas for years.

She is also, gay.

And until last month those three truths were never challenged or grouped together she says, on campus.

“Seven years after coming out this is the first time it’s come up even,” Dr. Wilson said.

It came up when a man came to school and handed out fliers, calling for her to be fired.

He included her picture on those fliers and a picture of her family showing her young kids.

“This isn't new to me that I would get some pushback from some people I just never know or knew it would include a picture of my kids as evidence of why I should be fired, “ Dr. Wilson said.

She said as it was happening, she immediately got a call from campus security.

“I think public safety's concern was this was the first time he has targeted an individual and used a picture of their family,” Dr. Wilson said.

Dr. Wilson said almost immediately she was supported from her students, some faculty and she even got a call from the Dean.

But in the hours after it happened, she felt the need to do something more than just take calls of support.

“I just thought the best way to respond to someone like this is to support those systems that he's trying to break down,” Dr. Wilson said.

She started a fundraiser for Dignity Twin Cities - an organization that advocates for Gay Catholics -of which she is proud one.

“For me I find deep and profound beauty in the church.  There is enough there that gives me hope that the church, although it moves slowly, it moves towards justice and I believe in  a God that moves towards inclusivity and love,” Dr. Wilson said.

She raised a few thousand dollars and then a colleague thought, what if they asked one of the most outspoken Catholic priests in the nation to give a talk about inclusion for gay Catholics to the St. Thomas Community.

He is Father James Martin.

“The Catholic Church teaches that LGBT people are to be treated with respect compassion and sensitivity,” Father Martin said in an interview from his home in New York City.

Father Martin's following is worldwide and in the hundreds of thousands if not more.

He holds a relationship with Pope Francis.

And his rebuke of what that man with those flyers did is not vague.

“The idea people would be protesting and as I understand passing out pictures of her children is, let's use a word that needs to be in the discussion, which is cruel. And that is certainly something not part of Catholic teaching, not part of the Christian world and not what Jesus asked us to do.
Sometimes I like to say that these people are so Catholic, these protestors, that they forget about being Christian,” Father Martin said.

Father Martin's daily homily is clear - treat gay Catholics with dignity and respect, but he is not saying change church teaching.

“I am not going to challenge the church teaching on same sex marriage but I do hope that the church sees the importance of listening to the experience of LGBTQ people in whom God is alive and active and not seeing them as the other,” Father Martin said.

“You don't have pick being gay or Catholic, it's not either or moments or decisions what it is I believe I am being my authentic self, I believe that is what my church asks me to do what the scriptures ask me to do and what God expects of me, and this is my home is the Catholic Church.”

The University of St. Thomas released a statement about the incident on campus, saying:

“This man has a history of criticizing St. Thomas employees. He is not allowed on campus, but we are limited in how we can respond to him when he is on public property. When we found out about this latest incident, we reached out to offer our full support to Dr. Wilson. We also sent a university-wide communication rejecting this man’s hateful message and reaffirming our commitment to an inclusive environment for our LGBTQA+ community members. This is consistent with Catholic teaching, which calls on us to love and care for every person. As Pope Francis reminds us, “God has created all human beings equal in rights, duties and dignity.”

Father Martin is giving an online talk about inclusion on Tuesday night at 7 p.m. You can register to view the discussion on the University of St. Thomas website.

MORE FROM BTN: Apartment living during the pandemic: what if my neighbors throw a party?