Who is attorney Ben Crump?

The civil rights attorney is now representing both the families of Daunte Wright and George Floyd. Here's how he rose to prominence. 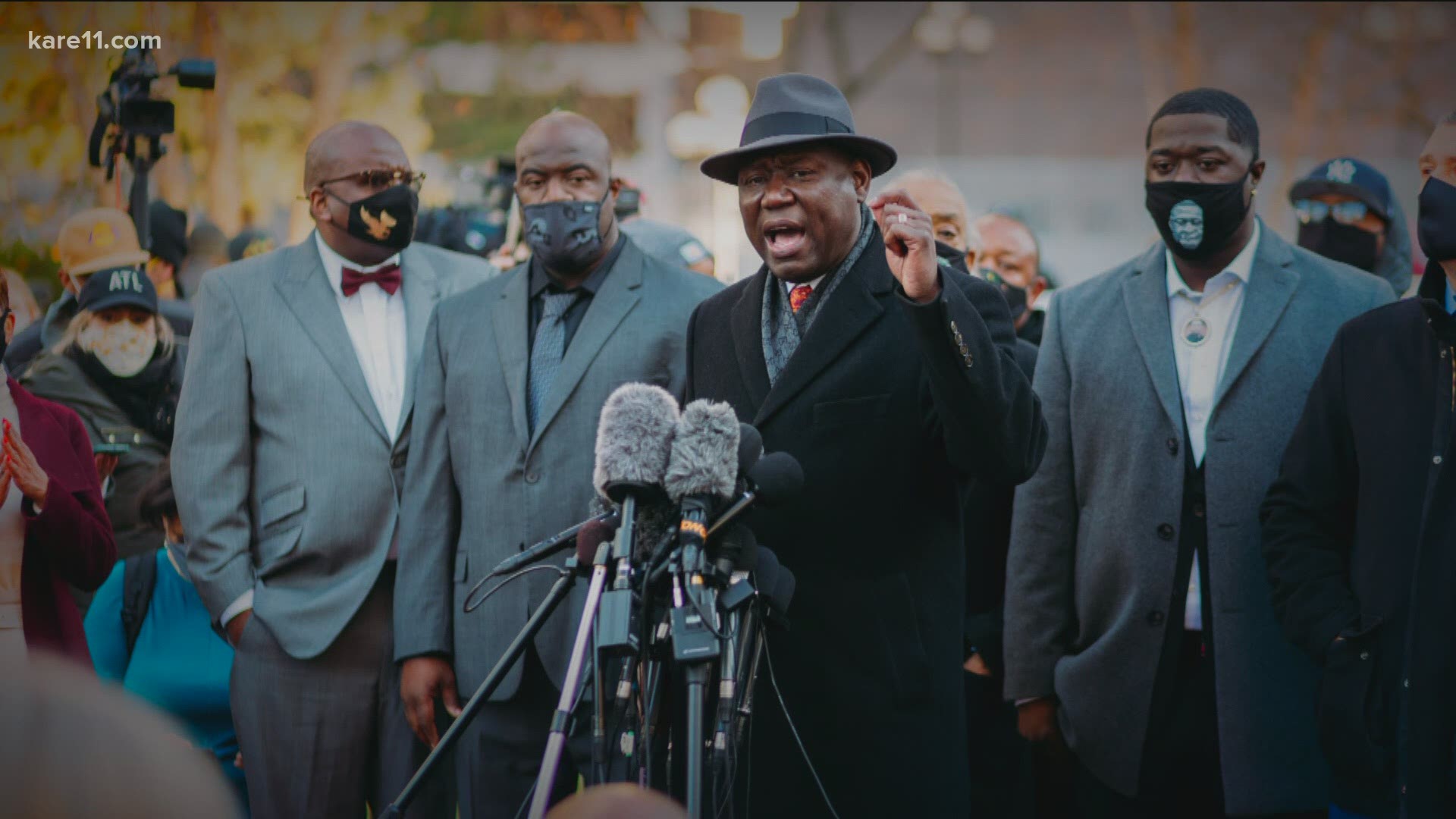 MINNEAPOLIS — On Tuesday, the family of Daunte Wright, the 20-year-old who was shot and killed by a police officer in Brooklyn Center, stood outside the Hennepin County Government Center for a news conference alongside the family of George Floyd.

"When it's Black people in America, (police) engage in the most use of force, and it ends up with deadly consequences, and that's why we're here today," Crump said.

Of course, Crump was already in Minnesota because Wright's death came during the trial of Derek Chauvin, and he's been representing the Floyd family since last summer.

Crump's journey to Minnesota, and national prominence, began in Florida, in 2012. He was asked to represent the family of Trayvon Martin, the 17 year old high school student shot and killed by George Zimmerman, a neighborhood watch coordinator. In 2014, he represented the family of Michael Brown, the 18 year old shot by a white police officer in Ferguson, Missouri. In both cases he won civil judgements, while, in criminal court, Zimmerman was acquitted and the Ferguson officer was never charged.

With each case that followed, Crump continued to build a reputation for keeping his clients names in the news.

In 2020 alone, he represented the families in multiple high-profile cases. There was Ahmaud Arbery, the unarmed 25-year-old killed by two white civilians in Georgia; Breonna Taylor, the unarmed 26-year-old shot and killed during a no-knock raid by Louisville Police; Jacob Blake, the 29-year-old man shot by an officer in Kenosha, Wisconsin; and George Floyd.

In nearly all of his cases, Crump has helped the families win civil judgments and wrongful death settlements worth millions, including a record $27 Million from the City of Minneapolis for the death of George Floyd.

"I call him Black America's Attorney General," Sharpton said during Floyd's funeral in Houston. "Probably because we don't feel we have one."

Crump helped successfully lobby the city of Louisville to ban no-knock warrants, and testified on police reform for the House Judiciary Committee in the month after Floyd's death last summer.

"The death of George Floyd has galvanized the world and mobilized Americans to demand a more just system of policing," Crump said.

As the trial of Derek Chauvin began three weeks ago, Crump was back in Minneapolis, and hopeful that his success in civil court would finally translate into a criminal conviction.

"Today starts a landmark trial that will be referendum on how far America has come in its quest for equality and justice for all," he said.

But on Tuesday, Crump admitted that even he was surprised that, with the case yet to go to jury, he is already back in Minneapolis to represent a different family.

"It is unbelievable," Crump said. "Ten miles from where the Chauvin trial – regarding George Floyd – was taking place, that a police officer would shoot and kill another unarmed black man."

Crump's embrace of the media spotlight has created some conflict in the past. The family of Tamir Rice had him removed from the case before it finished, and Rice's mother has been critical of his approach again in recent months. Still, Crump makes no apologies for his style and his use of the media spotlight to specifically put public pressure on elected leaders and others in power.