A recent Forbes article predicts Minnesota is next, citing the support of Governor-elect Tim Walz. 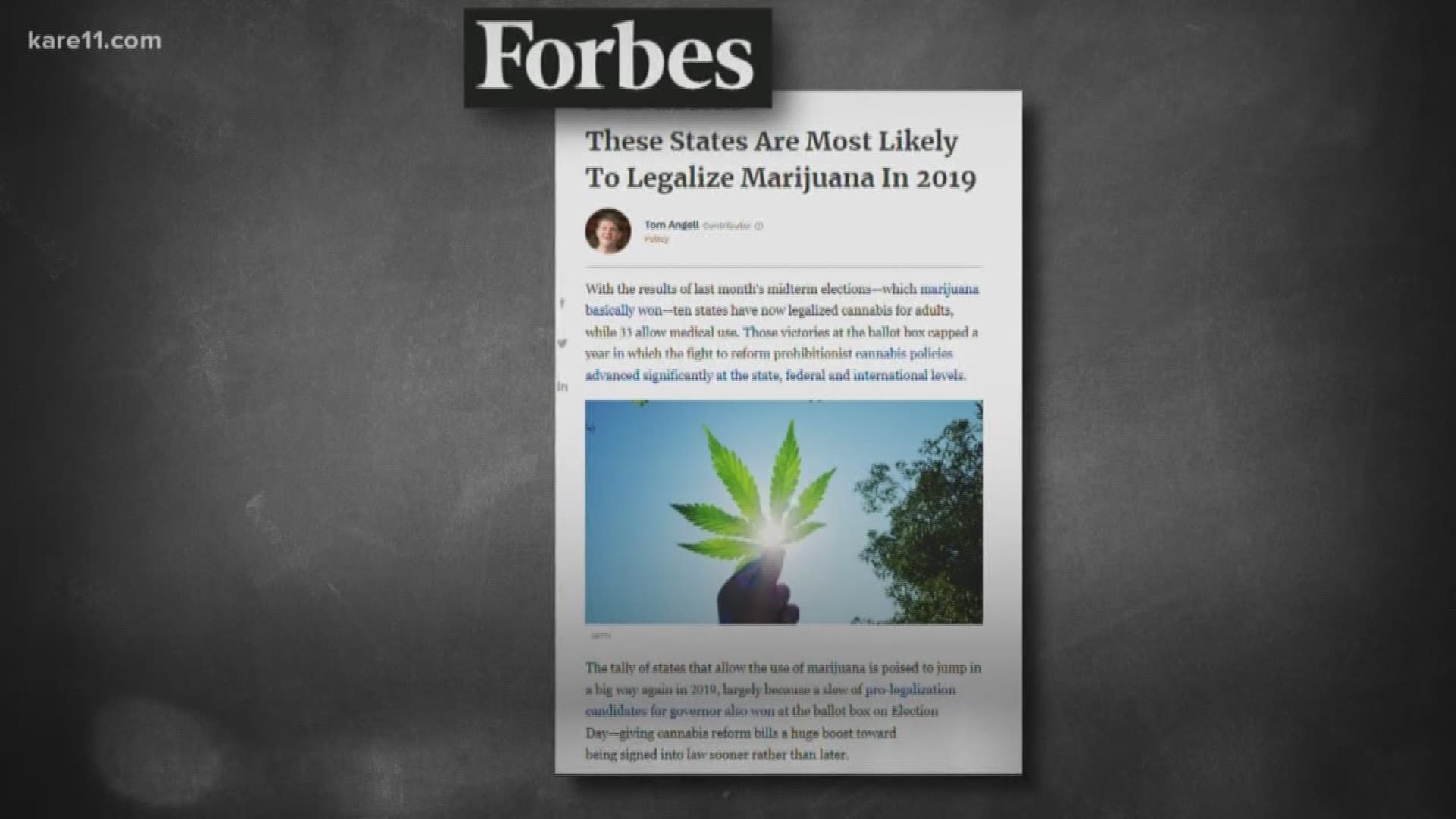 It's a buzzy headline for Forbes: "These States Are Most Likely to Legalize Marijuana in 2019," with Minnesota as one of the top states on the list.

Forbes cites Governor-elect Tim Walz's stated support for legal weed as the chief reason, and points out Walz was the first to get a cannabis bill passed through a committee in Congress.

So is Minnesota really ready to let people light up?

"In Minnesota, the people want it already," said Tom Gallagher, a criminal defense attorney, who also serves on the board of the pro-pot group, Minnesota NORML. "A lot of politicians would rather not be bothered with it. We think this is a very important issue because people are sitting in prison just rotting away, the families are wasting away without their family members. They're not making money, they're not paying taxes, we think it's very important."

Gallagher notes the large majorities of support in a recent Gallup poll: "Two-thirds of the people, almost bordering on a supermajority. It's where medical was 10 years ago, so it's very strong."

But even with that support, making recreational marijuana legal in Minnesota may not be that easy.

"We don't have the open initiative and referendum that you see in a lot of western states, which is how marijuana has been legalized in many states," said Brian McClung, who's familiar with the process, as former deputy chief of staff and press secretary for Governor Tim Pawlenty.

Ten states and District of Columbia have now legalized recreational marijuana; most recently, Michigan, after putting it to a statewide vote in 2018. In Minnesota, however, our state only puts constitutional amendments to a statewide vote.

Even then, an amendment needs be approved by the legislature; so if pot's going to get the thumbs up in 2019, you, the voter, have already had your say when you voted for your state lawmakers, who would have to approve it through an amendment, or outright as a law.

"This is something you have to have passed both houses of the legislature, and Minnesota is the only state in the country where you have a divided legislature," McClung added.

The DFL will control the Minnesota House, where incoming Speaker Melissa Hortman tells us in a statement, "Laws relating to marijuana will be part of the conversation at the Minnesota House this year, though it is too early to say what the path for this issue will look like. Many Minnesotans are asking for changes to marijuana laws, and House DFLers are interested in hearing their concerns."

Sounds hopeful for the pro-pot crowd, until you hear from Republican Senate Majority Leader Paul Gazelka. In his statement to KARE 11, Gazelka said, "Legalizing recreational marijuana has a litany of potential negative consequences. In states that have gone that route, there have been more car accidents, addiction rates have gone up, teenagers are using more, and people are more vulnerable to disease and mental health issues. I'm not sure how we can continue a very difficult fight against opioid addiction, and then turn around and legalize recreational marijuana with a straight face. Minnesotans need to know about the very real consequences before we drastically change the law."

Public support for pro-marijuana candidates was so strong in the last election that two groups, "Legal Marijuana Now" and "Legalize Cannabis," qualified as major political parties in Minnesota by getting at least five percent of the vote in statewide races. The only other official major parties in Minnesota are the Democrats and Republicans, and there's more common ground between them than you might think.

"A majority of Republican voters support legalization, so it is a bipartisan issue," Gallagher, a Republican, told us.

Gallagher and Minnesota NORML support a legalization method he compares to the way current laws regulate beer and wine. "People are familiar with beer and wine and how that's regulated legally; we can change the laws to just drop marijuana next to beer and wine, right across the board."

However, with a new governor and a busy legislative session, it's unclear how much attention marijuana laws will get in 2019.

"I don't think Minnesota is poised to pass legalized recreational marijuana this year, but you can see on the horizon this is maybe a 3-to-5 year issue," McClung said.

"It feels like we're reached a tipping point, a critical mass, it could happen," Gallagher said.