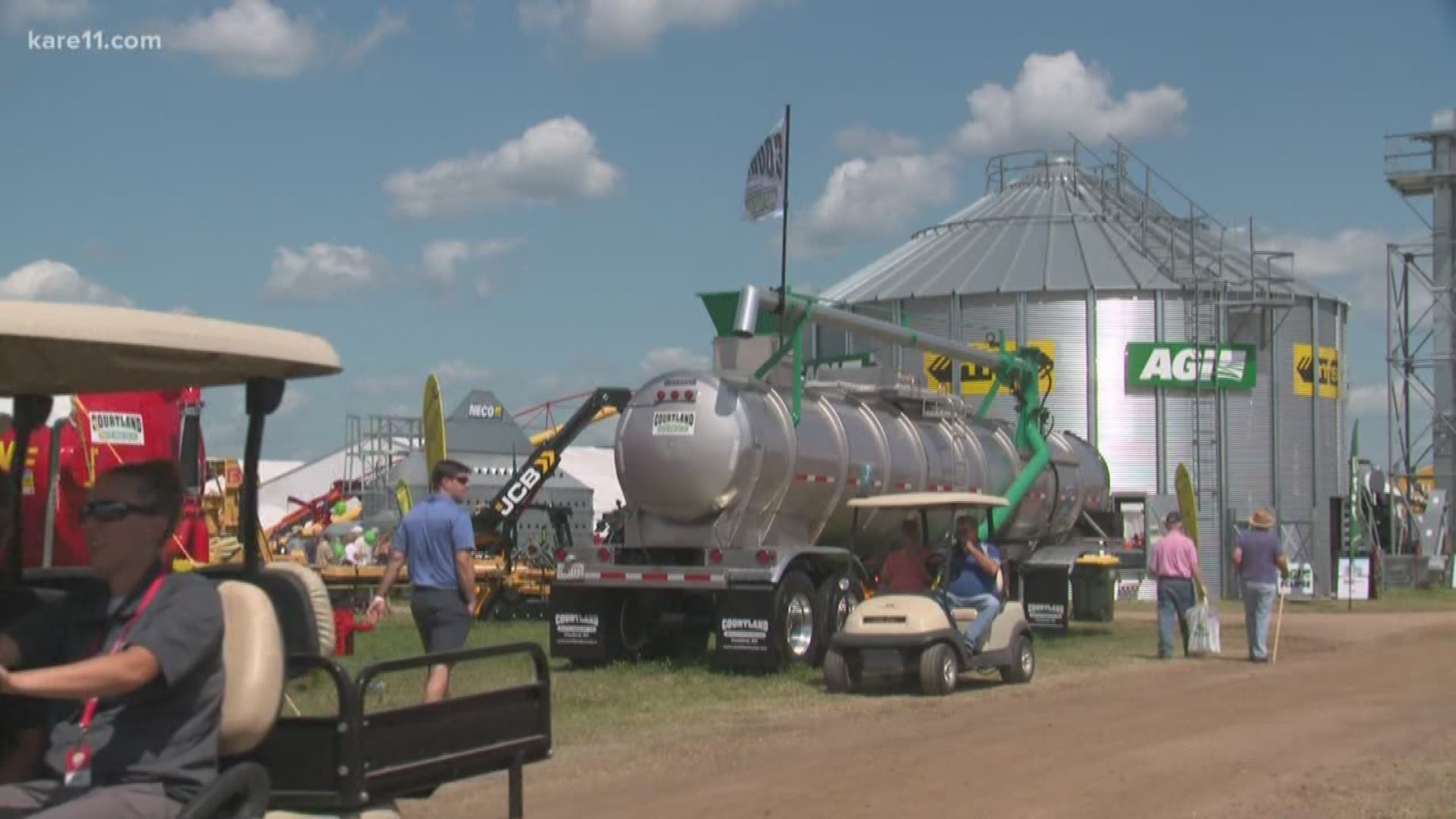 REDWOOD FALLS, Minn. — Farmfest is the place to be in August if you've got something to sell to Minnesota farmers. That's why implement dealers, seed companies, bankers, politicians and many others converge on this piece of flat land two hours southwest of the Twin Cities.

One thing farmers aren't looking to buy: more uncertainty about trade with China, which has been the biggest buyer of Minnesota soybeans.

As part of ongoing trade dispute with the Trump Administration, China announced Tuesday it would halt further purchases of US agricultural products.

"I don’t know how else you put it because every time somebody opens their mouth or tweets something the good news battles with the bad, and we’re sitting in limbo, so it’s hard to make a budget."

Corn and soybean farmers and the industries that rely on them have spent decades building up international markets for Minnesota exports, but they'd be hard pressed to replace China's business.

"It seems as though we’re just in a cat and mouse game and the president and the president of China are trying to call each other’s bluff. Through all of this agriculture is taking the biggest hit," Brian Thalmann, a fifth-generation farmer from Plato, Minn. told KARE.

He grows soybeans, but most of his acreage is in corn, which goes to ethanol. Thalmann said Minnesota's ethanol industry has been holding out hope that China could become a market, as more people drive cars in that nation.

He finds irony in the fact President Trump's trade maneuvers are aimed at producing more products in this country, but farmers were already leading the way when it came to that goal.

"Farmers in this country pride themselves on being a dependable, reliable supplier and we feel we’re just not able to get that message out there and get our product out to the world."

At Farmfest, the conversation often turned to whether to store this year's soybeans until prices get better, or to sell them at a loss.

The federal government sent relief payments last year to help offset some of the losses as crop prices faltered, but it's no substitute for long-term stability.

"I said to somebody recently, 'Trade, not aid' -- and they thought that was a new slogan," Tamera Nelson of the Minnesota AgriGrowth Council explained.

"I said, 'No, that’s from about 30 or 40 years ago.' Farmers really want markets, they enjoy producing a good crop and having a great price for it."

Nelson said the agriculture industry continues to innovate and find more uses for farm commodities and a more diverse set of trading partners. And farmers have a lot of experience riding out crises.  But, she cautioned, patience is wearing thin.

Among those making the rounds at Farmfest was Dennis Egan of Epitome Energy. He's currently raising equity to build a soybean crushing plant in northwest Minnesota, to give soybean farmers there another market for their crops.

"Their beans have always been shipped the west coast to go to China. Right now, they’re being told they don’t have a market for the beans that are going to be harvested in six weeks."

Egan said the plant near Crookston would produce soybean meal as well as oil to help meet the state's biodiesel mandate.

On Wednesday, things will really heat up when US Secretary of Agriculture Sonny Perdue stops at Farmfest. At least six members of Minnesota's congressional delegation will be there too, taking part in a panel discussion.