In Cold Spring, a college student faces off against the Confederate flag 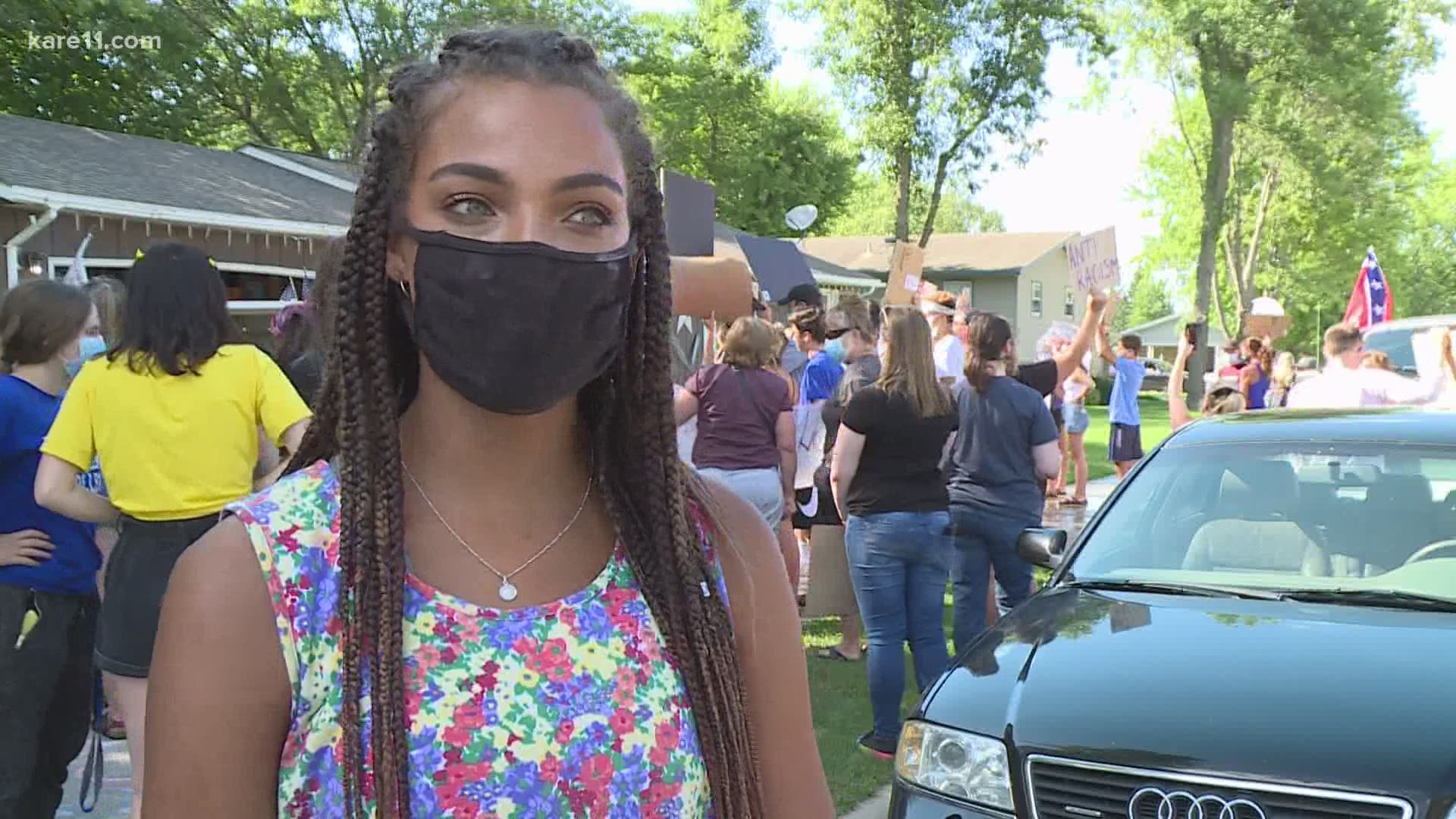 COLD SPRING, Minn. — Twenty-year-old Jayda Woods has been home from the University of Georgia since spring, and something has been bothering her the whole time.

"I've asked to have them take it down," she said.

A Confederate flag hangs at a neighbor's house in Cold Spring, across from ROCORI High School - where she went to school. It's the first thing that some people see when they drive into town, Woods said.

Woods, who is bi-racial, went over to the house with her 12-year-old brother a handful of times to write on the sidewalk with chalk, as a sort of protest. Then, she decided to start bringing along a bigger crowd.

Credit: Gary Kamphuis, KARE
Protesters gather between a truck and a home both bearing Confederate flags in Cold Spring, Minnesota on July 28, 2020.

Woods has organized two protests at the home, on July 22 and 28. Dozens of people attended both times, from fellow students to adults from the neighborhood.

"We pushed it out and got a bunch of kids there ... to draw chalk, like just positive messages and try to put some pressure on the neighbors, too, to try to get them to help us get the Confederate flag down," she said.

KARE 11 reached out to a resident of the home displaying the flag, but he declined a request for an interview. Woods said they turned on sprinklers to wash off the chalk, and that another neighbor even brought out a power washer.

Credit: Gary Kamphuis, KARE
The residents turned on sprinklers and sat outside the home in the driveway while protesters gathered on July 28, 2020.

"It is his First Amendment right, freedom of speech," she said. "But what I would just like is at least like a letter from like the city of Cold Spring or from ROCORI High School, just asking him to take it down."

Woods said her younger sisters have told her they get chills when they run past the house, training for their track team, and see the flag.

"We're not going to just stand by and have this flying in our neighborhood, right next to all of these kids, right next to the school where everyone's driving by," she said. "That's the first impression of Cold Spring if you come in from that way. That's just something I don't want to live with for our town."

On Tuesday, Woods appeared before the Cold Spring City Council and made her request. They issued this statement in response:

"The City of Cold Spring does not condone racial discrimination or the display of racist icons. The city strives to be a welcoming community for all persons regardless of race, color, ethnicity, religion, gender identification, age, ability, place of origin, citizenship status and veteran status. All citizens have the right to freedom of speech guaranteed by the first amendment to the Constitution. The right is fundamental to our democracy and protects us all against tyranny. For that reason, the city can make no laws that abridge any citizen's right to freedom of speech regardless of how offensive the speech may be."

Woods has started a Change.org petition to ban the public display of the Confederate flag.

She said her protests have "riled up" a lot of people in Cold Spring and that she has received some hateful messages, even threats toward her family. Woods said she and her sister have had people yell at them when they're out running, and make gagging motions toward them in their places of work.

But she said she's focusing on the people who are stepping up to help - and the people she's helping.

"A mom just moved in with her 2-year-old and she came just crying," Woods said after the first protest. "Like, 'Thank you. I felt so alone.'"

Woods said the mother was an immigrant, and had just moved into the neighborhood. She had been driving by the flag every day on her way home.

"That was really touching," Woods said. "It feels good knowing that she sees that people are with her, because every day she goes home and just sees that. And that's just horrible."