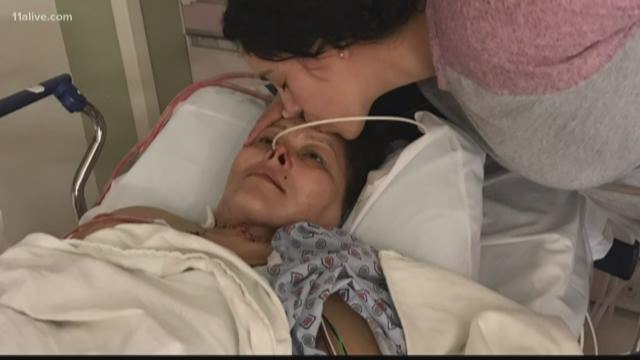 Cristian Padilla Romero, a Yale University student who graduated from Cross Keys High School in Atlanta, issued a media release on Monday saying his mother, Tania Romero, who is from Honduras, was almost deported on Monday night by Immigration and Customs Enforcement.

Padilla Romero now says ICE attempted to do that, removing her by force from where she has been detained at the Irwin County Detention Center after midnight Monday and initiating deportation proceedings.

He said his mother was left with bruises as six guards carried her away and that she wasn't fed for more than 15 hours as ICE took steps to put her on a plane to Honduras, where she hasn't lived in more than 20 years and where her children worry her health will further deteriorate without access to the regular care she has been receiving.

This was done without proper documents Honduras would need to issue for Tania Romero to travel there, and as she still has pending motions and appeals in her deportation case, Padilla Romero's release said.

ICE provided a response to 11Alive that did not address the specifics of this case. It was not clear what stopped the deportation.

Supporters have been tweeting under the hashtag #ReleaseTaniaNow.

"We denounce these actions and demand her immediate release," Padilla Romero's media release on Monday states. "I am asking for congressional support to advocate for my mom to receive humanitarian parole and to relieve her of the threat of imminent deportation by releasing her from detention.".

Tania Romero's four children acknowledged she arrived in the country as an undocumented immigrant years ago. She was detained by ICE after an arrest in August for driving without a license in Gwinnett County.

The children told 11Alive in October she worked three jobs to help give them a better life in the U.S. An online petition posted by Padilla Romero says she took jobs as a housekeeper, restaurant dishwasher and construction worker.

In 2017, she was diagnosed with mouth and throat cancer. Her daughter Driana Matos told 11Alive it was a "really difficult time in our lives where our family had to stick together ... more than ever."

Padilla Romero said if she were to be deported now, "it could be the death of her." In his release, he said her treatment by ICE amounts to torture.

“It’s very hard for her to eat in general, and we are really concerned about her health in detention, where she is not receiving any special accommodation,” Mr. Padilla Romero told The New York Times.

The petition to stop the deportation currently has more than 37,000 signatures.

"It is imperative that our elected officials intervene to stop this injustice," Padilla Romero said in his release.