The defense has rested in the trial of Mohamed Noor, whos is charged with murder and manslaughter in the July 2017 death of Justine Ruszczyk Damond. 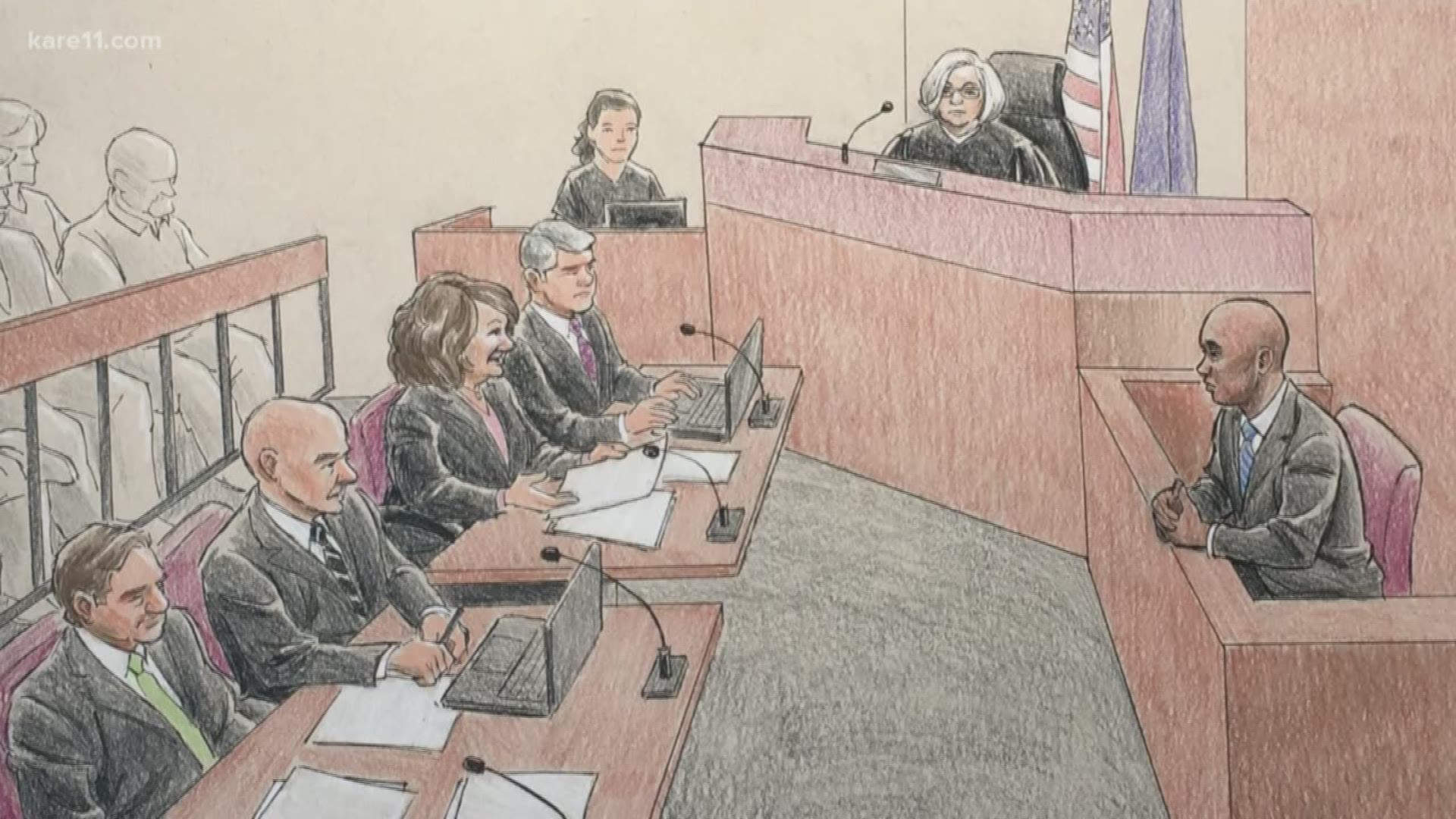 MINNEAPOLIS — The defense has rested in the trial of a former Minneapolis police officer who shot and killed an unarmed woman who approached his squad car.

Closing arguments are expected Monday after the prosecution calls at least one rebuttal witness. Judge Kathryn Quaintance told jurors they should expect to begin deliberations Monday. And she said they would be sequestered once deliberations start. That means they will stay overnight at a hotel after deliberating to 7 p.m. at the latest each day. They will not return home until they reach a verdict.

Friday's testimony wrapped up the fourth week at the trial of Mohamed Noor. He's charged with murder and manslaughter in the July 2017 death of Justine Ruszczyk Damond, a dual citizen of the U.S. and Australia who had called 911 to report a possible sexual assault behind her house.

Earlier, prosecutors went aggressively after Noor in cross-examination Friday morning, grilling him over his decision to fire his weapon and kill an unarmed citizen in July of 2017.

Noor took the stand one day after he was called by his defense team to testify. On Friday prosecutor Amy Sweasy began by pointing out the MPD's use of force policy that uses the "sanctity of life" of citizens as cornerstone. Noor's partner Matthew Harrity testified earlier in the trial that he put his 'own' safety first, and Noor basically told jurors the same thing yesterday.

Sweasy then seized on Noor's failure to activate his body camera in the moments leading up to the fatal shooting of Justine Ruszczyk Damond.

Sweasy: "You mean after you shot her."

Sweasy then seized on Noor changing his testimony from Thursday about whether he went to the shooting scene with his attorneys and private investigator. He now admits that he did after repeatedly denying that yesterday. Noor claimed he misunderstood Sweasy's questions.

The prosecution also pressed Noor on the level of threat posed by Ruszczyk Damond, intimating he did not need to use deadly force.

Sweasy: "What degree of certainty did you have that Ms. Ruszczyk had a weapon?"

Noor: "I had to make a split-second decision to protect my partner."

KARE 11's Lou Raguse says that seemed to be Noor's go-to answer when directly answering the question might hurt him.

"You had absolutely no other choice?," Sweasy pushed.

Sweasy: "What steps did you take to confirm the threat"

Noor says he saw a woman at the window raising her right arm.

Sweasy: No weapon was apparent?

Noor: I didn't see any weapons.

Sweasy wound up her cross-examination by trying to turn the tables on Noor's self-preservation testimony. "You said if you don't do your job correctly, you can get killed?"

Sweasy: "Is it also true that if you don't do your job correctly someone else can get killed?"

Noor: That is correct.

On redirect defense attorney Tom Plunkett pointed out that Noor was never trained that someone with blonde hair and a pink shirt can 'not' be a threat, and that Noor and other officers were trained to "react with action."

Plunkett finished by having Noor go over the laundry list of factors that led to the fatal shot.

"All contributed to how I reacted," Noor said.

Noor's left the witness stand midmorning, and he was followed by the defense team's use of force expert Emanuel Kapelsohn. Kapelsohn told jurors "My opinion is that under all the circumstances, Officer Noor's use of deadly force was objectively reasonable. In hindsight we know Ms. Ruszczyk wasn't armed. But of course Officer Noor didn't."

Kapelsohn says he's testified 84 times in use of force cases and insists he has helped prosecutors "many times." He told jurors that Ruszczyk Damond's hands would not have been visible at all to Noor, and not to Harrity at certain distances.

After the defense expert gave what Raguse calls an effective presentation of his re-creation of the shooting (which included a blonde actress wearing a pink shirt), prosecutor Sweasy forced Kapelsohn to admit that 83 of 84 cases he's testified in were in support of an accused officer. She also hounded him about a lack of measurements concerning his experiments, especially when placing the actress near a car to determine sight lines.

On Thursday Noor told jurors about his experience growing up as a Somali in Minnesota, and talked about becoming a police officer. He then described in detail the events that led to the fatal shooting of Justine Ruszczyk Damond that fateful night in July of 2017, telling jurors while stopped at the end of the alley he saw a bicyclist.

RELATED: A timeline of the fatal shooting of Justine Ruszczyk Damond

"Soon as the cyclist comes to a stop, I hear a loud bang on the driver's side. Soon as I hear it, my partner yells, 'Oh Jesus' while he went for his gun," Noor testified Thursday afternoon. "He turned to me with fear in his eyes. His gun appeared caught in his holster," Noor said.

Defense attorney Tom Plunkett asked, "How did you know?"

"I saw a female in a pink shirt with blonde hair raise her right arm. I fired one shot. And the threat was gone,"  said Noor.

Plunkett:  "What was the significance of raising arm?"

Noor: "She could have had a weapon, sir."

Plunkett: "Why didn't you wait?"

Noor: "My partner would have been dead." 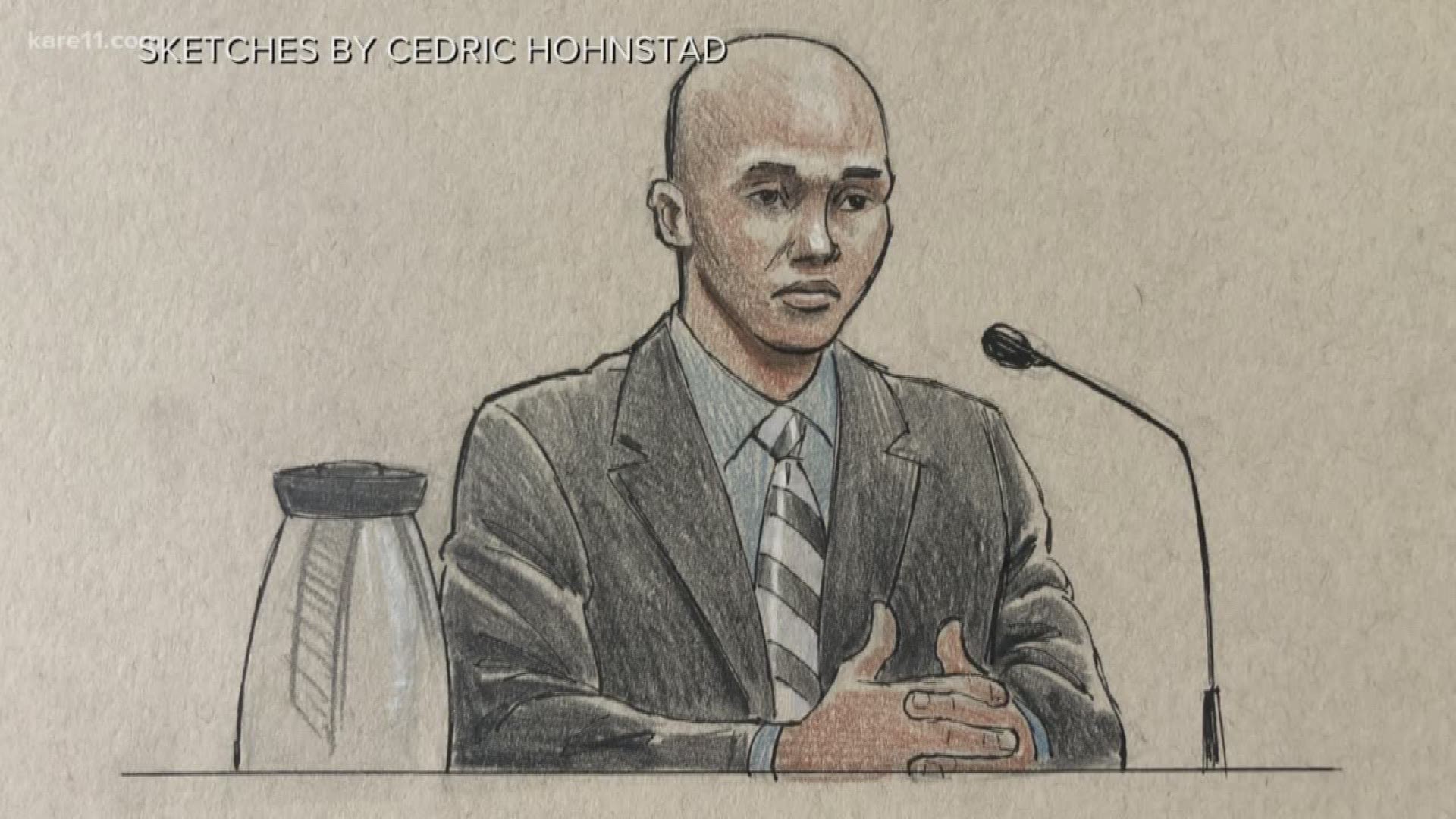 KARE 11's Lou Raguse, who has been in the courtroom every day of the Noor trial, says early in the direct examination the defense revealed what for the moment appears to be an effective strategy. They asked Noor about every negative thing in his police file, the incidents prosecutors have been wanting to ask about. The defense strategy seemed to take the power away and minimized incidents.

Among those incidents was one where Noor appeared to point his gun at a driver's head. Noor testified that driver almost hit bicyclist, gave that cyclist the middle finger and drove for 2 blocks while refusing to stop for police. Noor testified that's why they did a "felony stop," which means guns out. His story made his reaction sound reasonable, and it will be interesting to see if the prosecution grills him on that traffic stop Friday. Regardless, Raguse feels the impact of that squad car video on the jury is surely lessened.

In cross examination late Thursday afternoon prosecutors got Noor to admit he did not see Ruszczyk Damond's hands, see her holding a weapon or the gold smart phone she called 911 on to report what she suspected was a sexual assault.

Noor fled Somalia's civil war as a child, following a well-worn path with his family to a refugee camp in Kenya, the U.S. and eventually Minnesota. After a difficult start, he "fell in love" with his new city, Minneapolis, and carved out a life in business.

Then he spotted an online ad recruiting police officers.

"I always wanted to serve," Noor said Thursday, breaking more than 18 months of silence since shooting and killing an unarmed woman who approached his squad car.

Noor, now 33, is on trial for murder and manslaughter in the July 2017 death of Justine Ruszczyk Damond, a dual U.S.-Australia citizen who had called 911 to report a possible crime minutes before she was shot.

His testimony added some detail to what was already known about Noor, whose hiring in 2015 was welcomed by city leaders seeking to diversify a police force in a melting-pot city with the nation's largest population of Somalis.

Noor described his early years near Mogadishu as the oldest of 10 children in a middle-class family whose patriarch both farmed and worked for a non-governmental organization. When he was 5, he said, the family fled to Kenya because of strife in Somalia and spent nearly two years in a refugee camp before his father got a U.S. visa.

The family lived for about five years in Chicago. Noor didn't know any English when he arrived and was behind in school, but some teachers helped get him caught up. The family then moved to the Minneapolis area, where he found it difficult at first.

"When I moved here, no one liked Somalis, and I picked that up right away," he testified.

But things got better after Noor signed up for football and began making friends. He became a citizen in 1999 and eventually graduated from Augsburg University, a school close to the Cedar-Riverside neighborhood that is home to many of the city's Somalis.

Noor studied economics and business administration and worked as an assistant general manager for a hotel. He was in a job handling pharmaceutical benefits when he spotted the Minneapolis Police Department's ad.

He joined the force through a 29-week cadet training program and had some bumps. Noor testified Thursday about once clearing the ammunition from his gun incorrectly, leaving a round in the chamber, and being chewed out.

Damond's death led to questions about Noor's training, but then-Police Chief Janee Harteau said Noor "was very suited to be on the street."

The cadet program is aimed at finding candidates who already have a two- or four-year college degree in another field, said Nate Gove, executive director of the Minnesota Board of Peace Officer Standards and Training, which sets licensing and training standards for law enforcement agencies and officers.

"Nobody is waved through the program," Gove said. He said such programs are "not fast track" and that candidates still must meet minimum standards and pass license examinations.

After Noor completed the program successfully and was assigned to the city's Fifth Precinct, city leaders heralded his arrival.

Noor, who is married and has a son from a previous marriage, was fired from the force after he was charged with killing Damond. He renewed his peace officer license a few days later, making him eligible to serve as a police officer until 2021 if he's acquitted and can find employment.

A felony conviction prevents anyone from being a law officer in Minnesota.

After Noor is done Friday his defense team is expected to call their own 'use of force' expert, and then closing statements could take place beginning Monday.