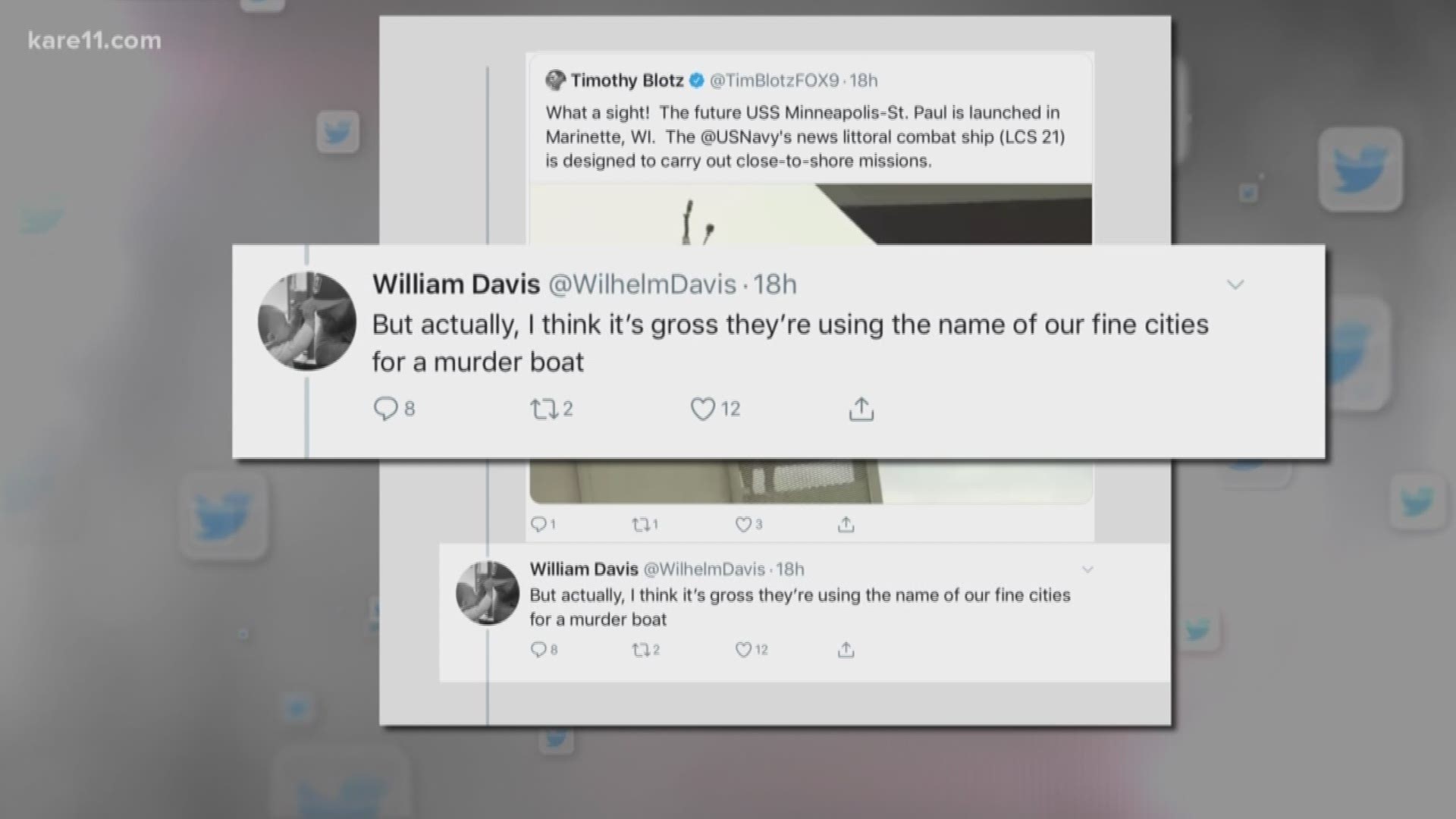 MINNEAPOLIS — The DFL's lead researcher will no longer post anything on social media on behalf of the party, in the aftermath of controversial Twitter post that drew fire from both sides of the political spectrum.

"First of all, I'm totally appalled by it!" Gov. Tim Walz told reporters Tuesday. "Certainly the disrespect shown was beyond the pale."

It started over the weekend at the Fincantieri Marinette Marine shipyard in Marinette, Wisconsin, where the Navy christened the new combat ship that will be commissioned as the USS Minneapolis - St. Paul.

Twin Cities TV reporter Tim Blotz posted a picture of the christening ceremony on Twitter, to which DFL staffer William Davis replied, "But actually, I think it’s gross they’re using the name of our fine cities for a murder boat."

Davis was apparently making a broader point about collateral casualties from cruise missiles launched from US ships, but the timing and the language he chose shocked many who saw the tweet before he deleted it.

"This is not the place to express your opinion when it comes to the christening of a ship that will have our naval personnel on it," Wa'z remarked.

"I’m not going to comment on personnel H-R issues, not as governor, but as a veteran in Minnesota, I'll say it's not acceptable"

Republican lawmakers called on the party to outright fire Davis.

"This poked at the men and women of our military, particularly the Navy and calling a ship a 'murder boat' infers he believes my son and my friend's sons who are in the Navy are murderers," Rep. Jim Nash, a Republican from Waconia, told KARE.

Nash attended the christening ceremony in Wisconsin as a way to show respect for his son, David, who is in the Navy and currently at sea aboard the USS Comfort medical ship.

"They secure shipping lanes around the world, they provide security for people around the world and they defend our country. And they give him (Davis) the opportunity to be critical of things."

"I would like to offer my sincere apologies for the tweet sent by one of our employees. It was unacceptable and does not reflect my own feelings or those of the Minnesota DFL. The staffer who sent teh tweet has apologized and deleted his Twitter account. Going forward, he will no longer be engaging in public-facing communications on behalf of our party."

Davis is the top researcher at the state DFL party and deputy communications director. In his dealings with the news media he has typically come across as easy going, friendly and informative.

But his edgy sense of humor has landed him in hot water before.

Last fall Martin temporarily suspended Davis for a remark on Twitter about taking Republican lawmakers to the guillotines.

Rep. Nash said an apology isn't enough, asserting that Davis shouldn't have any role in the DFL party.