The drought is hitting Minnesota farmers hard and forcing some to take extra measures to keep going. 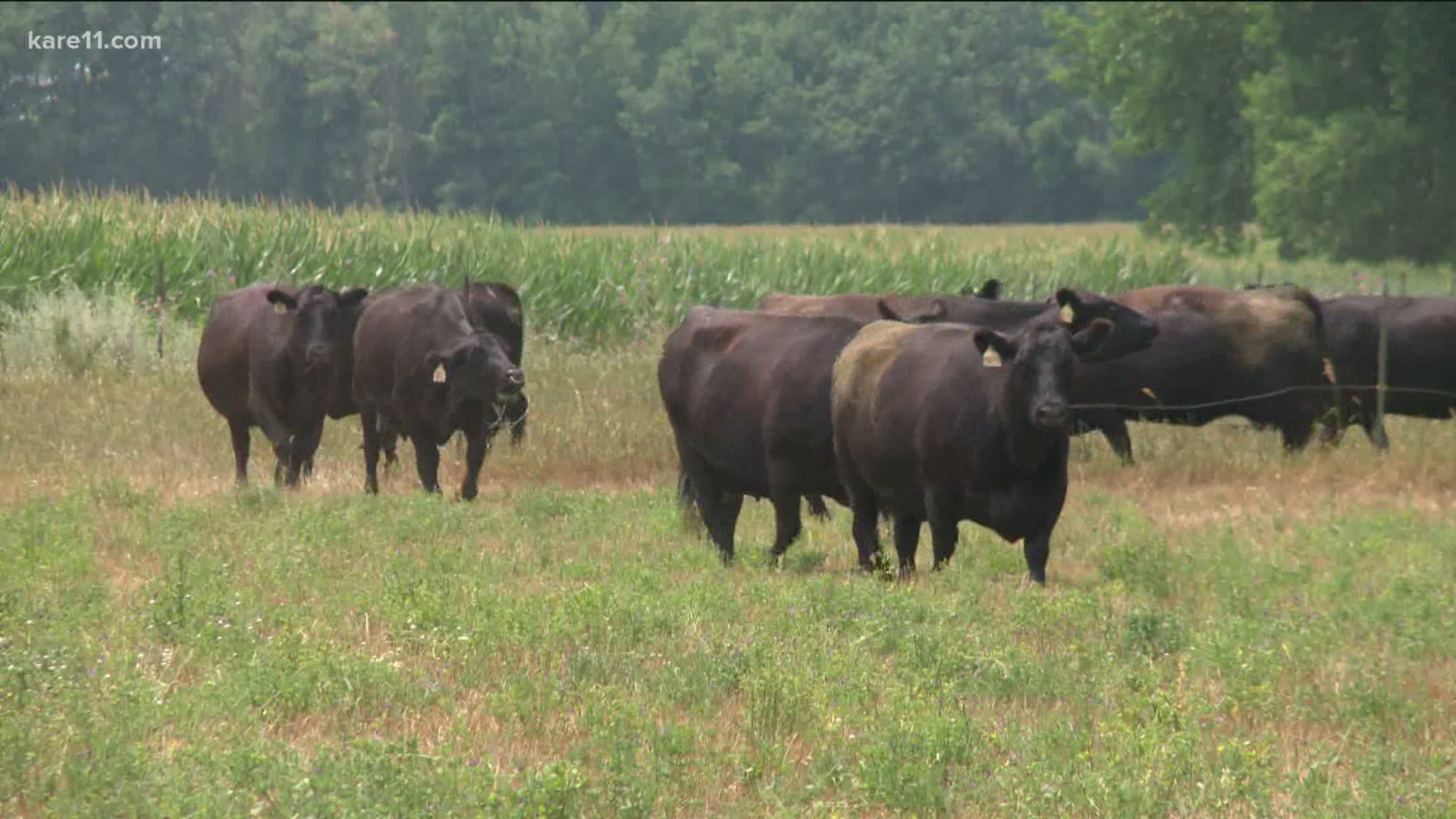 KIMBALL, Minnesota — At Schiefelbein Farms in Kimball, the cows are on the move.

"They know that if I take them to the next pasture, there may be better groceries there. So they're ready to eat something better," said Don Schiefelbein.

The family farm — which started in 1955 — has thousands of cattle.

Schiefelbein said they have been dealing with dry conditions for the past three to four weeks.

"When it gets dry like this, just emotionally it's very tough," Schiefelbein said. "All you have to do is look at the corn field. When it looks more like pineapples than it does corn, you know it's devastating."

According to the National Integrated Drought Information System, about 4% of Minnesota is under an extreme drought (D3).

At Schiefelbein Farms, the hayfield should be knee-high by this time of year. Instead, it's sparse and barely ankle-high.

Schiefelbein estimates they have about 75% less hay this year. Out of their 2,500 acres of corn, they will not be able to harvest hardly anything.

Neighbors have reached out to help, offering their meadows. Because of the drought, Schiefelbein has been able to access lower levels of swamps and meadows to grab more hay.

"It means building fences where they never were. It means bringing in tractors and trying to take hay that normally you don't," Schiefelbein said.

In a typical year, the hay on their land would be enough to feed the herd. But this year they have also been forced to buy hay. Schiefelbein estimates the price of hay is three times higher than normal.

"Hay prices has been skyrocketing over the last couple of weeks," said Allison VanDerWal, executive director of the Minnesota State Cattleman's Association (MSCA). "Also if we think about, cattle don't just get hay. They also get corn as an energy source and they get other protein whether it's coming from alfalfa or a different source of protein. Commodity prices we've seen grow higher."

RELATED: Finally, some rain for farmers in Minnesota, but they need more

VanDerWal said inventory was already low due to farmers going through more hay during the pandemic.

In some parts of the state, farmers are being forced to sell cattle or retire early. As KTTC reported, Brenny Farms in Goodhue County plans to sell parts of the herd.

While VanDerWal does not know of many, she has heard of some farmers deciding to retire early.

"We're dealing with some really tight margins right now from feed inventory and then what we're getting paid for that live animal. It's kind of all compounding and saying, 'If we can't make it work, then this is maybe our time to get out' which is too bad. It's very, very sad," VanDerWal said.

Schiefelbein said they are trying to keep the herd intact.

"We've spent multiple, multiple years developing the genetics in these animals so that is a last-ditch effect," he said.

To help feed the herd, the farm is hoping to gain access to DNR ground near them. About 800 acres of state-owned land is just north of the farm.

"Good news is it helps that land, as well. It helps the nutrients come back in and the grass grow greener next time. It's a win-win if they're willing to cooperate," Schiefelbein said.

RELATED: As Minnesota's drought worsens, Walz reaches out to the USDA for aid